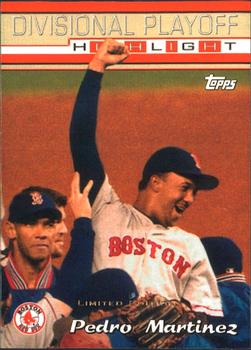 The 1999 American League Division Series shifted back to a sold-out Jacobs Field1 for a Monday night winner-take-all Game Five between the Cleveland Indians and Boston Red Sox.

The Red Sox had retreated to Fenway Park down two games to none after losing Game Two on October 7, unsure if their ace Pedro Martinez would be available again after leaving the opener with a pulled back muscle.2

But Boston’s offense exploded over the weekend, scoring 32 runs to win two games and even the series. The Red Sox set a postseason record for runs in Game Four’s 23-7 thrashing3 as Cleveland pitching fell apart.4

With Martinez still questionable for Game Five, the Red Sox turned to 35-year-old Bret Saberhagen on short rest.5 A two-time winner of the Cy Young Award6 and a World Series MVP7 whose career had been derailed by injuries, Saberhagen won 10 games with a 2.95 ERA in 1999 while displaying his usual stinginess for the free pass.8 He had struggled against Cleveland in Game Two of the ALDS, lasting less than three innings, allowing six runs, and walking three.

Opposing Saberhagen, also on short rest, was 32-year-old Charles Nagy. A 17-game winner in 1999 despite a 4.95 ERA, Nagy had three career postseason wins, all at the expense of the Red Sox.9 He had pitched brilliantly in Game Two, allowing one run on five hits over seven innings in the Indians’ 11-1 victory.

Game Five’s “X factor” would be Martinez, who had a season for the ages in 1999, winning the American League pitching Triple Crown with a 23-4 record, a 2.07 ERA and 313 strikeouts in 213⅓ innings. The 27-year-old right-hander was reportedly available for a few innings if necessary.10

The Red Sox were aggressive in the top of the first inning. Second baseman Jose Offerman grounded out to shortstop Omar Vizquel on the first pitch of the game. After Game Four star John Valentin11 grounded out to Nagy, designated hitter Brian Daubach hit one through the infield for a single.

Nomar Garciaparra, in the cleanup spot despite a nagging wrist injury,12 had been a thorn in the side of Indians pitching all season, batting .451 (23-for-51) with 5 home runs, 17 RBIs, and 16 runs scored in 12 games.13 He jumped on Nagy’s first pitch, hitting it into the stands over Kenny Lofton’s extended reach at the center-field wall for a 2-0 Red Sox lead.

In the bottom of the first, Lofton drew a leadoff walk, stole second base,14 and scored on Vizquel’s double down the line in left. Two outs later, Jim Thome hammered Saberhagen’s 2-and-0 offering to deep center field for a 3-2 lead. The 477-foot home run stands, as of 2020, as the sixth longest home run in the history of Jacobs Field (renamed Progressive Field in 2008).15

Entrusted with the 5-2 lead, Nagy lost it in the third inning. A leadoff walk to Trot Nixon, a single by Offerman, and a fielder’s choice grounder by Valentin scored one run. Daubach’s one-out double put runners on second and third for Garciaparra.

Manager Mike Hargrove huddled with Nagy. Cleveland decided to walk Garciaparra and face Troy O’Leary, who was 2-for-17 in the series18 after his first-inning strikeout. O’Leary immediately foiled the strategy, hitting a first-pitch grand slam to right-center field. The Red Sox had regained the lead, 7-5.

But the Indians were unbowed. Roberto Alomar and Manny Ramirez19 doubled off Lowe to start the third inning. Thome unloaded another home run for an 8-7 lead. The Fox cameras showed Martinez warming up in the Boston bullpen.

Nagy was lifted for rookie Sean DePaula after center fielder Darren Lewis hit a leadoff double in the fourth. Lewis moved to third on Sandy Alomar Jr.’s throwing error and scored on Valentin’s sacrifice fly. The game was tied, 8-8.

As Boston’s half of the fourth ended, Fox cameras immediately showed Martinez emerging from the bullpen, removing his warm-up jacket like a fighter entering the ring. “Pedro Martinez will be under the watchful, scrutinizing eye of Joe Kerrigan,” play-by-play announcer Joe Buck said over the raucous boos as Martinez finished his warm-up pitches. (Kerrigan was the Red Sox pitching coach.)

As fans chanted “Pedro, Pedroooo,” Martinez retired the Indians in order. With one out, Lofton was lost for the night with a shoulder injury after diving into first base trying to beat out an infield hit.20 Dave Roberts,21 later a postseason hero for the Red Sox and a World Series-winning manager for the Dodgers, took over in center field in the top of the fifth.

In the seventh, DePaula was replaced after three innings of hitless work23 by Paul Shuey,24 a six-year veteran of the Cleveland bullpen. A single by Valentin and a groundout to second base by Daubach brought Garciaparra to the plate with the go-ahead run in scoring position. Pitching coach Phil Regan came out to discuss the situation with Shuey and decided to pitch to Garciaparra. After Shuey threw ball one low and in, Alomar raised his right hand for an intentional pass, once again putting runners aboard for O’Leary.

Just as in the third inning, O’Leary found the first pitch to his liking and deposited it over the wall in right. He had driven in seven runs25 after the two intentional walks. The Red Sox led 11-8.

Martinez stifled the Indians in the seventh, fanning Alomar and Ramirez, and returned for the eighth. He pitched his fifth scoreless inning in a row, striking out Thome for the second time.

Cleveland elected to pitch to Garciaparra. A double off the top of the wall in left scored Boston’s 12th run. Now it was O’Leary’s turn to be walked intentionally before Jackson escaped the jam.

Williams sent Martinez out in the bottom of the ninth. Enrique Wilson, pinch-hitting for Sandy Alomar, grounded out. Roberts lined out. Vizquel fanned to end the game. It was a remarkable performance. Initially reported available for perhaps a few innings, Martinez ultimately pitched six hitless innings with three walks and eight strikeouts.

“I felt we needed to shut them down,” Martinez said. “I was even surprised at how well I felt.”29

“It may not be possible, in the span of three games, to make up for nearly a century’s worth of disappointment,” wrote Gordon Edes in the Boston Globe, “but last night at Jacobs Field, in completing one of the most improbable comebacks in postseason history, the Boston Red Sox made an unforgettable case for short memories and living for the moment.”30

The battered Cleveland pitching staff recorded a 9.63 ERA for the series and allowed 44 runs in the final three games.31 Even after winning 97 games and scoring 1,000 runs,32 the Indians fired Hargrove four days later.33 Hargrove, who had managed the team for nine years, was replaced by Charlie Manuel in 2000. Cleveland’s run of five straight Central Division titles came to an end despite a 90-win season.

Boston pitching was on fumes as the team headed to Yankee Stadium for the ALCS,34 which they lost in five games despite Martinez’s seven-shutout-inning, 12-strikeout gem in a Game Three win.35 After the season, Martinez was unanimously awarded his second of three Cy Young Awards.36

The summer of 1999 bridged my freshman and sophomore years at nearby Case Western Reserve University, and I took the opportunity to get paid to watch as much baseball as I could handle. I ushered nearly every game that season, including Game One and Game Five of the ALDS. I will always remember how each of O’Leary’s first-pitch home runs crushed the joyous mood in the ballpark. They were so unexpected, so sudden in their violence. I have also never heard a roar emanating from fans near the bullpen area as I did that night. After initial confusion from my post down the first-base line, we learned that Pedro was warming up in the third inning, and a chill ran down my back on an already cool October night. It remains, and will probably always be, the best piece of clutch pitching I have ever witnessed in person.

In addition to the sources cited in the Notes, I consulted the Baseball-Reference.com and Retrosheet.org websites for pertinent material and the box scores noted below. Sources consulted included a recording of Fox’s broadcast of the game, available at the YouTube link noted below.

1 The attendance was 45,114 according to Baseball-Reference.com and Retrosheet.org.

7 Saberhagen completed both of his starts in the 1985 World Series against the St. Louis Cardinals, including Game Seven, allowing just one run and one walk in the Series.

18 O’Leary also went 1-for-16 in the 1998 Division Series against Cleveland and had an .093 batting average in the two postseasons until this at-bat.

19 The double was Ramirez’s only hit of the series. He would finish 1-for-18 with eight strikeouts after driving in a franchise record 165 runs during the regular season along with 44 home runs, a .333 batting average, and a league-leading 174 OPS+.

21 Roberts started 30 games for Lofton in August and September as Lofton battled injuries down the stretch.

23 DePaula pitched in the final three games of the series on consecutive days, including five outs in the Game Four loss on Sunday night, striking out three.

24 Shuey was the number-two overall selection in the 1992 amateur draft, just after the Houston Astros selected Phil Nevin first overall and before the New York Yankees selected future Hall of Famer Derek Jeter at number six.

25 O’Leary remained, as of 2020, one of five players to drive in five runs in a postseason game: Seattle Mariner Edgar Martinez in 1995, the Red Sox’ Mo Vaughn in 1998 against the Indians, the Red Sox’ John Valentin the previous night in this series, and the Los Angeles Dodgers’ Kike Hernandez in 2017. Baseball-reference.com. https://stathead.com/tiny/GkfTZ (Stathead is a subscription-based service through baseball-reference.com). Accessed December 13, 2020.

27 Ramon Martinez, four years older than Pedro, was in his first season in Boston and pitched only 20⅔ innings in 1999. He was a 20-game winner and Cy Young Award runner-up in 1990 during his 11-year stint with the Los Angeles Dodgers.

31 Game Three starter Dave Burba was the only pitcher on the 11-man staff not to allow a run in the series.

32 Only seven teams since 1901 have scored 1,000 runs and as of 2020 the 1999 Indians remained the only team since the 1950 Red Sox to have done so. Baseball-reference.com. https://stathead.com/tiny/9uoR0 (Stathead is a subscription-based service through baseball-reference.com). Accessed December 13, 2020.

34 Boston had one day of rest before starting the ALCS on Wednesday, October 13, at Yankee Stadium. Kent Mercker was the Game One starter for Boston.

35 Martinez easily out-pitched former Red Sox ace Roger Clemens, who was facing his former team for the first time in the postseason. Clemens allowed five runs in two-plus innings in a 13-1 Boston victory.

36 Martinez had won in 1997 with the Montreal Expos and would win unanimously in 2000 with Boston.