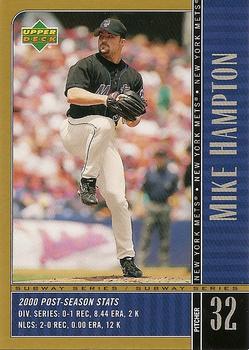 The New York Mets believed that they would be playing their division rivals, the Atlanta Braves, in the National League Championship Series. But when the St. Louis Cardinals beat the Braves in three games, the Mets had to focus on playing a different rival. The Cardinals were their rivals in the late 1980s (in the days before the wild card) when the two teams battled each other several times for the National League pennant.

During the 2000 season, the Mets had swept St. Louis on the road in May and at Shea Stadium in July. But the Cardinals had swept the Mets at Busch Stadium in September. In that last series, the Cardinals won all three games in their last at-bat. As the Mets tried to refocus their energies on facing the Cardinals, Mets outfielder Darryl Hamilton said: “We've just got to find a way to get the magic back from when we played them early.”1

Darryl Kile started the first game for the Cardinals. He led the Cardinals staff in victories during the season, finishing with a 20-9 record. Kile also won the first game of the Cardinals’ Division Series sweep on October 5, so he was rested and ready to pitch. But the Mets were also ready for him and wasted no time in demonstrating that.

Timo Perez led off with a line-drive double to right field. He moved to third when Kile’s second pitch to Edgardo Alfonzo was wild. After Kile walked Alfonzo, Mike Piazza stepped into the batter’s box and hit Kile’s first pitch down the left-field line to score Perez. It was Piazza’s first RBI of the postseason. “The monster's out of the cage, the monster's out of the cage,” yelled Mets bench coach John Stearns.2

Robin Ventura hit a fly ball to left field to score Alfonzo. Suddenly the Mets were up 2-0. Kile settled down and struck out Todd Zeile and got Benny Agbayani to ground out to short to end the Mets half of the inning.

Mike Hampton took the mound for the Mets. He had yet to earn a win in five postseason appearances in his career so he was looking to silence his critics. He was facing a St. Louis team that had outscored Atlanta 24-10 in their Division Series sweep. The Cardinals had bullied Atlanta pitching with big two-out hits from the heart of the order.

It looked as if the Cardinals might jump on Hampton as they had done to the Braves pitchers. The Cardinals hit two singles in the bottom of the first. After Hampton walked Will Clark to load the bases with two outs, the crowd were on their feet looking for a Cardinals score. But Carlos Hernandez grounded out to second to end the Cardinals threat.

Hampton helped the Mets add to their lead in the fifth inning when he hit a one-out single deep in the hole at short. He moved to second when Perez hit a weak groundball that left Kile with one option, an out at first. When Alfonzo singled to left field, Hampton scored, and the Mets led, 3-0.

Both pitchers continued to keep their foes scoreless through the seventh inning. Kile held the Mets hitless, and Hampton just gave up two safeties, a double in the sixth and a single in the seventh. Neither hit produced a run for the Cardinals, though Edmonds almost tied the game with a blast to left field with two on and two outs in the seventh.

As the crowd rose to their feet sensing the possibility of a tie game, Benny Agbayani looked unsure of himself as he backed up against the wall in front of the Mets bullpen. But he gathered himself and made an unconventional-looking catch. He caught the ball facing sideways, just below his left shoulder for the final out of the inning. “I thought it was out. I didn’t think it would clear by much, but I thought it would get out,” said Edmonds.3 Said Agbayani: “I think everybody took a deep breath after that catch. Some of the guys in the dugout said, ‘You made us nervous there,’” Agbayani said.4

Mike James replaced Kile in the eighth and got the Mets out in order. In the bottom of the eighth, Mets manager Bobby Valentine decided it was time to pull Hampton and rely on his bullpen to finish the game. He brought in John Franco, who had been the set-up man for the closer during the season. Although Franco gave up a two-out single to Hernandez, he got the next batter, pinch-hitter Shawon Dunston, to fly out as Cardinals slugger Mark McGwire watched from the on-deck circle. “Johnny got [a] big out,” Valentine said afterward.5

Mike James stayed on the mound in the ninth. Zeile led off the inning with a home run to add to the Mets lead. Agbayani singled and Jay Payton hit James’s first pitch over the Busch Stadium wall for the Mets’ second home run of the inning. Suddenly the score was 6-0.

After James hit Mike Bordick with a pitch, Cardinals manager Tony La Russa brought in Jason Christiansen. Valentine later said he thought James hit Bordick intentionally. “You mean, do I think they took the smallest guy in our lineup, and decided to throw at him? I doubt it,” Valentine said sarcastically when asked about the incident after the game.6 Christiansen struck out pinch-hitter Bubba Trammell and got Perez to ground into a double play.

The Cardinals were down to their final three outs. Valentine brought in his closer, Armando Benitez. The Cardinals weren’t ready to give up. Ray Lankford led off with a double. Benitez got Fernando Tatis and Fernando Vina to fly out, and it appeared that he would close the door on the Cardinals.

But Kurt Abbott, who had taken over at shortstop for the Mets, fielded Edgar Renteria’s grounder and bounced a low throw that got by first baseman Todd Zeile. The error on Renteria allowed Lankford to score. Then Perez misjudged a line drive by Edmonds and the ball bounced past his glove to bring home another Cardinals run. These were the first runs allowed by a Mets pitcher in 25 innings. Benitez did not let these mishaps rattle him and he got Eric Davis to ground out to third to give the Mets a 6-2 victory.

“We had our opportunities tonight, and we didn’t come through. We had some good at-bats. We hit the ball hard. But we hit a lot of at-’em balls,” said Clark after the game.7 The Cardinals outhit the Mets 9-8 yet came away with a loss.

“I would say this puts the Mets right in the driver's seat,” said announcer Tim McCarver as he reviewed the game on television.8 The Mets were just pleased to get a victory on the road. “You want to come out of here and play for a split, at least,” said Zeile, whose ninth-inning home run had given the Mets some added insurance.9