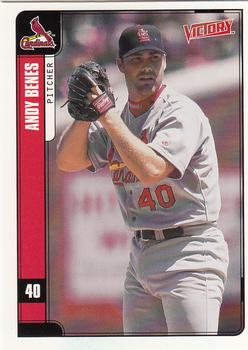 After losing two games at home, the St. Louis Cardinals headed to New York in a deep hole in the National League Championship Series. No other team had come back from a two-game deficit in the NLCS after losing the first two at home (although it had happened several times in the World Series.)

Mark McGwire, the Cardinals slugger who had been sidelined in the series with an injury, told reporters: “We’re not in a good position. It’s their home where they’ve been playing very well all year.” But Cardinals manager Tony La Russa was not as pessimistic, saying, “Other than the record, how can you be down about this club? And how can the club be down? You can’t.”1

The Cardinals sent Andy Benes to the mound to try to get the win and keep them in the series. Benes had damaged the cartilage in his right knee and the joint had to be drained before each start. He did not pitch during the Cardinals’ three-game sweep of the Braves the week before, but was looking forward to helping get the Cardinals back into contention. “We’ve been underdogs since Day One in the playoffs. And we’re underdogs in this series,” he said before the game.2

Right-hander Rick Reed started for the Mets. Although he had an 8.00 earned-run average against the Cardinals this season with two no-decisions, he entered the game with a 2.84 ERA in the postseason.

Shea Stadium filled with 55,693 fans lured by the pleasant autumn weather and the chance to see the Mets clinch another opportunity to head to the World Series. Although the crowd expected the Mets to jump on the Cardinals, it was the Cardinals who wasted no time in doing that to the home team.

Fernando Vina led off with a single to left field. Then Robin Ventura bobbled Edgar Renteria‘s bunt down the third-base line. With runners on first and second, Jim Edmonds stepped to the plate.

Mets pitchers had prevented Edmonds from playing an offensive role in the first two games. He had just two hits in nine plate appearances and had yet to get an RBI. But the left-handed Edmonds stroked a two-run double to the opposite field, with the ball landing just inside the foul line. After Will Clark singled to put runners at first and third, Reed struck out the next three batters. But the damage was done and the Cardinals had a lead they would not relinquish.

The Mets got one of their two runs of the evening in the bottom of the first. Timo Perez popped a two-strike pitch to center for a single. Edgardo Alfonzo followed and hit Benes’ first pitch to him for another single. With runners on first and third, Mike Piazza grounded into an around-the-horn double play. The speedy Perez scored to leave the Mets down by just one run.

Reed got the Cardinals out in order in the second but they continued to hammer away at him in the top of the third. Renteria led off with a single. Edmonds flied out to left, Benny Agbayani making a running catch and holding on to the ball as he ran into the outfield wall. But Reed walked Clark, and Ray Lankford hit a full-count pitch for a line-drive single that scored Renteria, and allowed Clark to reach third. Clark scored when Fernando Tatis hit a line-drive sacrifice fly to Perez in right. By the time J.D. Drew popped to the catcher for the third out, the Cardinals had extended their lead to three runs, 4-1.

“I was nervous. I won’t lie to you,” Reed said after the game. But he said he had been nervous in his other postseason appearances when he was more successful. “When I needed to make a quality pitch, I just didn’t do it,” Reed said. “And if you don’t make quality pitches to a lineup like that, they’re going to hit you around a little bit and that’s what they did.”3

With the left-handed Glendon Rusch now on the mound, La Russa removed Lankford and sent the right-handed McGwire to the plate. McGwire had four hits, including a homer and two doubles in just six at-bats against Rusch in his career. The day before, La Russa, asked if the slugger would be able to play in the third game, had told sportswriters that McGwire was “the most dangerous pinch-hitter in history.”4

But Rusch was ready to face the Cardinals slugger this evening. First, he backed McGwire off the plate with an inside pitch. McGwire sent the next pitch into the seats three-quarters of the way down the first-base line. Rusch ended the threat by getting McGwire to hit a fly ball to Agbayani in left.

The crowd at Shea rose to their feet in the fourth when the Mets loaded the bases on a walk and two singles. The Mets needed just one hit to tie the game or at least make it close. But Jay Payton bounced to second and Vina made a smart play that snuffed out the Mets’ chance at a rally. Instead of throwing home, Vina saw Agbayani stop in his tracks and head back to first. He fired to first to get the speedy Payton. Clark then easily tagged out Agbayani to complete the double play. The Mets scored another run but their rally was ended.

During the season, rookie Payton had struggled with runners on base. “He threw me a slider that I should have laid off of. He made the pitch he had to in that spot,” Payton said after the game.5 Valentine told reporters that “[Benes] threw really good pitches when he had to. The time we had them on the ropes, we couldn’t put them away.”6

Rick White replaced Rusch, who had thrown only nine pitches, in the fifth. He promptly gave up a double (Tatis) and two singles (Drew and Hernandez) to add to their lead. After a sacrifice, Vina reached on a fielder’s choice that scored another run. Renteria hit a groundball that left the shortstop with only one play, a throw to first for the second out as the third Cardinals run of the inning crossed the plate. After Edmonds flied out, the Cardinals were up 8-2.

After giving up the lone run in the fourth, Benes shut down the Mets through eight innings. The Mets managed to get one more hit off him, a single in the eighth. By the time he was removed for a pinch-hitter in the ninth, he had struck out five batters and allowed only six Mets singles.

Piazza, who had just one hit, a single off Benes in the eighth, expressed the Mets’ frustration when he said of the pitcher, “He throws pitches that are tough to lay off of.” Todd Zeile also gave Benes credit after the game, saying, “Andy did a good job of using our aggressiveness against us.”7

Benes summed up the Cardinals’ feelings when he said after the game: “They scored early in the games against us [in St. Louis]. It was nice to break out on top early. That’s comforting to know that you’ll have at least a few runs to work with. It was nice to keep the crowd out of the game, because these people here, they love it.”8