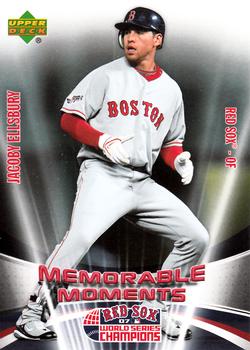 Naturally, the Rockies were glad to return home to Denver, even though the Red Sox led the 2007 World Series two games to none. They’d won five games in a row at Coors Field, including two postseason games, and 10 of their last 11. They had a home record of 51-31 during the regular season. Their phenomenal stretch drive gave them every reason to believe they would fare better in their home park, and the move to a National League field deprived the Red Sox of the designated hitter. Only six of the Red Sox had ever played at Coors, where many visitors struggle with the altitude adjustment. The situation presented, said Fox broadcaster Joe Buck, “a distinct home advantage for the Rockies.”1

Red Sox skipper Terry Francona wanted David Ortiz in the game, so he asked the DH to play first base (as he had done during the two World Series games in St. Louis in 2004). Kevin Youkilis sat on the bench, despite hitting .396 (.483 on-base percentage) to this point during the 2007 postseason. To pitch, Francona selected 15-game winner Daisuke Matsuzaka, Boston’s third-winningest pitcher after Josh Beckett (20 wins) and Tim Wakefield (17 wins prior to being sidelined with a back injury). It was “Dice-K’s” rookie season in the American major leagues.

Clint Hurdle started Josh Fogg to try to hold Boston at bay. Fogg, a right-hander as well, was a native of Greater Boston. His record was 10-9 (4.94), but only Jeff Francis had won more games for the Rockies (17).

Neither team scored in the first two innings, as both starters pitched through mild trouble. Boston’s first two batters of the game hit infield singles, but Fogg struck out Ortiz and induced two fly-ball outs. In the second, Julio Lugo doubled after two outs, but Matsuzaka’s strikeout ended the inning.

Colorado’s first two innings were also fruitless. Second baseman Kaz Matsui singled in the bottom of the first and took second on an error by right fielder J.D. Drew. After Troy Tulowitzki struck out, Matsui tried to advance on Matt Holliday’s comebacker, but Dice-K fielded the ball and threw him out at third. Todd Helton grounded out to end the inning. Matsuzaka hit leadoff batter Garrett Atkins in the second but had no real difficulty after that.

The Red Sox broke the game open in the third. Speedy center fielder Jacoby Ellsbury shot a ball over third base and into left field for a double. Dustin Pedroia laid down a perfect bunt and beat the throw to first as Ellsbury advanced to third. Ortiz swung at the first pitch and doubled to right field, to the left of the right fielder. Ellsbury scored with ease. With runners on second and third, Fogg walked Manny Ramirez intentionally to pitch to third baseman Mike Lowell. Lowell grounded the ball right up the middle, and two more runs scored.

After J.D. Drew hit a high pop fly to shortstop for the first out, Catcher Jason Varitek singled to left. Ramirez tried to score from second, but umpire Ted Barrett called him out on Holliday’s throw home. Fogg walked Julio Lugo on four pitches; Dice-K came to bat with the bases loaded and two outs. But Matsuzaka, swinging at the first pitch, singled between third base and shortstop, driving in two more runs to make the score 5-0.2 Ellbsury, up for the second time in the inning, hit another double, this time blooping one into center. It was 6-0, Red Sox. Hurdle summoned Franklin Morales to put out the fire. The Rockies reliever got Pedroia to ground out.3

Neither team scored in the fourth or fifth, nor did the Red Sox score in the top of the sixth. The Rockies got on the board in the bottom of the inning. Matsuzaka had allowed only three hits and one walk in the first five innings, but after retiring Holliday on a groundout to lead off the sixth, he walked the next two batters.

Francona decided to make a move (he’d just replaced Ortiz on first base with Youkilis, the better defender) and brought in a reliever, left-hander Javier Lopez. Rockies right fielder Brad Hawpe dropped a single into center, driving in one run, and then catcher Yorvit Torrealba grounded a single through the left side of the infield, driving in another. Francona replaced Lopez with Mike Timlin, who got the final two outs. The score stood 6-2.

Matt Herges pitched the top of the seventh for Colorado. He faced three batters — Ramirez, Lowell, and Drew — and struck out all three, each them swinging for strike three.

Matsui led off the Rockies’ seventh by dropping down a bunt for a base hit and stealing second. Tulowitzki followed with a single to put runners on first and third with nobody out. Francona called on Hideki Okajima to put down the rally. He’d been lights-out in the postseason to this point, appearing in six games and throwing 9⅔ scoreless innings. But this time Holliday launched his first pitch deep to center field for a three-run homer. It was Holliday’s fifth home run of the postseason; his .340 batting average had led the National League and his 137 RBIs had as well; his 386 total bases led the majors. More importantly in the moment, the Rockies had closed to within a run, 6-5.

Todd Helton followed with a single, but Okajima bore down and got Atkins and Hawpe to strike out and Torrealba to ground back to the mound, for a 1-3 play. “For a second, the swagger of 21-1 was back. Just as quickly, it vanished. … the Rockies have averaged 10 strikeouts per game in the Series, buzzkill for any loud rally.”4

Hoping to keep the game close, Hurdle sent in Brian Fuentes to pitch the eighth. Varitek grounded to short, but Lugo walked and then Coco Crisp (who’d come in to play center, with Ellsbury moving to right field) singled under a diving Tulowitzki at short. Ellsbury doubled for his fourth hit of the game (and third double), the ball landing practically on the right-field foul line.5 Pedroia doubled to right field, too, for his third hit of the game. Ellsbury drove in Lugo; Pedroia drove in both Crisp and Ellsbury. It was 9-5, Red Sox. Fuentes retired Youkilis and Ramirez, but Boston again had some breathing room.

Manny Delcarmen got the first two outs in the bottom of the eighth but then allowed a single and a walk. Francona called on Jonathan Papelbon. He threw one pitch and got the third out, a fly ball by Holliday.

The Red Sox scored one more run in the top of the ninth against LaTroy Hawkins. Lowell singled. Alex Cora, who had come into the game at second base, sacrificed him to second. An unlikely running threat with only three steals all season, Lowell nonetheless stole third. He tagged up and scored when Varitek hit a fly ball to center field. The Red Sox had doubled the score of the Rockies, taking a 10-5 lead.

In the bottom of the ninth, Papelbon induced Helton to fly out and Atkins to ground out. Hawpe’s triple to right field gave the Coors Field crowd one more moment to cheer, but two pitches later it was all over when Torrealba grounded out, short to first.

Just think, wrote Bob Ryan in the Boston Globe, as the Red Sox were on the brink of a possible sweep, “Eleven days ago, the Red Sox were in neck-deep doo-doo, down 3-1 [games] to the Indians.”6

The Red Sox’ 15-hit attack included hits from every member of their starting lineup but Ramirez. “When everybody in the order gets a hit,” wrote John Powers about the lack of a DH, “nobody needs to be designated.”7

In addition to the sources cited in the Notes, the author consulted Baseball-Reference.com, Retrosheet.org, and a YouTube video of the game. Thanks to Carmen Reale for supplying articles from the Denver Post.

2 Matsuzaka had been 0-for-4 during the regular season. It was his first hit in the major leagues. He had, however, played outfield, as well as pitched, in high school and had homered in his final season playing for the Seibu Lions before signing a massive contract with the Red Sox. “He was also a perennial winner of the Gold Glove,” added the Boston Globe’s Nick Cafardo, “known for his cat-like quickness and athleticism.” Nick Cafardo, “A Solid Performance All Around,” Boston Globe, October 28, 2007: 32. Cafardo cited a play in this game as significant: “In the first inning, Dice-K made a nice diving stab on a ball hit to his right by Matt Holliday. Matsuzaka saw his old Seibu teammate, the speedy Kaz Matsui, was caught between second and third. Matsuzaka started a run-down than ended with Matsui being tagged by Mike Lowell. It was a big out and changed the momentum.”

5 It landed just out of the grasp of a sliding Brad Hawpe or, as Jackie MacMullan of the Boston Globe put it with an apology to readers, “it took a bad Hawpe for the Rockies.” See Jackie MacMullan, “Ellsbury a Hit from the Get-Go,” Boston Globe, October 28, 2007: 30.

8 Woody Paige, “Barely There,” Denver Post, October 28, 2007: 1W. He added, “All the Red Sox players should be forced to spend Sunday morning in the humidor.” This was a reference to a humidor the team had installed in the ballpark to store baseballs before the game so they would not be as hard as they would otherwise be in the mile-high atmosphere.