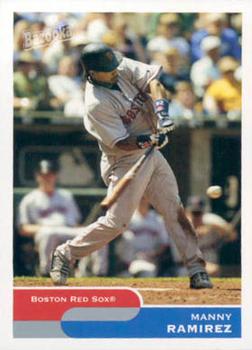 The 92-70 Anaheim Angels finished atop the American League West in 2004, one game ahead of the Oakland Athletics. On the morning of September 28, with only six games remaining, the Angels were in second place. They hadn’t been in first place since early June. They were tied for first on September 30. For the first three days of October, as they battled the Oakland Athletics for the lead in the division, they took sole possession of first and that is where they finished. They’d fought to win their division and come out on top.

The Boston Red Sox (98-64) were the wild-card team, with the best won-lost record among the second-place finishers.

The best-of-five series began in Anaheim. Head-to-head, the Red Sox had won five of the nine games during the 2004 regular season. Both teams had .282 team batting averages. The Angels had been World Series champions just two years earlier, in 2002. The Red Sox had played deep into the postseason in 2003.

The Red Sox had scored more runs (949) than any other team in baseball; the Angels had scored 836 runs.

Angels manager Mike Scioscia named lefty Jarrod Washburn as his starting pitcher. Washburn was 11-8, but had lost four of his five previous decisions. Scioscia “had to decide whether to start Jarrod Washburn on extra rest or go with Bartolo Colon on short rest. He decided to go with Washburn, who was dominant in 2002 but has been pedestrian this season.”1

Curt Schilling was Red Sox manager Terry Francona’s choice of a starter. Schilling’s 21 wins (he was 21-6) had led the majors. In his previous postseason appearances, he had a 5-1 record and a 1.66 ERA. He had been co-MVP of the 2001 World Series (with Randy Johnson), when he pitched for the Arizona Diamondbacks against the New York Yankees.

Washburn retired the first two batters he faced in the top of the first, but then the two sluggers came through — Manny Ramirez doubled off third baseman Chone Figgins’s glove into shallow left field (it could well have been deemed an error) and David Ortiz singled off another fielder’s glove — second baseman Alfredo Amezaga — before dying in shallow right field, but allowing Manny to run around third and score. It was 1-0, Red Sox.

Otherwise, neither team scored through the first three innings, though the Angels left four men on base.

In the top of the fourth, the Red Sox broke the game open. Ortiz took the first four pitches of the inning and walked. First baseman Kevin Millar was up next and he jumped on the first pitch for a home run to left field. Catcher Jason Varitek lined to left and shortstop Orlando Cabrera walked. Third baseman Bill Mueller struck out on three pitches. Gabe Kapler, playing right field, singled and loaded the bases. Center fielder Johnny Damon grounded to Figgins at third. More anxious to cut down the run at the plate than to try to start a double play with the speedy Damon running to first, Figgins hurried his throw and threw wide of catcher Bengie Molina. Two runs scored on the throwing error. Now it was 5-0, Boston.

Scot Shields was brought in to relieve and he struck out Mark Bellhorn. Then Manny Ramirez made it 8-0 with a home run over the fence in center field. It was the 17th postseason home run of this career.

The seven runs in one inning set a Red Sox franchise postseason record.2 Because of the error by Figgins, five of the runs were unearned.

DH Troy Glaus (World Series MVP for the Angels in 2002) homered deep to left-center to lead off the Angels’ half of the fourth, making it 8-1. Two groundouts and a foul pop to third base ended the inning.

There was no scoring in the fifth or sixth, but the Angels did threaten in the sixth, loading the bases. In the seventh, they scored. Twice. With one out, Darin Erstad launched a solo home run to right-center. With two outs, Garret Anderson one-hopped the ball back to Schilling, who tossed the ball so wildly to Doug Mientkiewicz at first base that Anderson was not only safe but ran all the way to second base and on to third before the ball was retrieved by the foul line in right field. Schilling had seemed to hurt his right ankle covering first base in the fifth inning and reached down to grip it after throwing the ball away on this play. Glaus swung at the first pitch and drove it to the warning track in left-center, where it short-hopped the wall. He had a double and easily drove in Anderson.

With the score now 8-3, Francona called in Alan Embree to take over for Schilling. Embree got Adam Riggs to pop up foul to the catcher.

Schilling later said that he had indeed hurt himself on the Anderson play. “I felt the tendon tear, it popped when I hit the ground after making the throw. I knew something bad had happened.”3

The Red Sox scored once more, in the top of the eighth. Damon singled to right, stole second after there was one out, took third on a groundout, and — after Ortiz was walked intentionally — scored with ease on a perfect bunt by Mientkiewicz.

There was no more drama in the game. Mike Timlin, relieving for the Red Sox, retired the final six Angels batters, striking out the side in the bottom of the ninth. The final score was Red Sox 9, Angels 3. Scioscia and company hoped to even things up in Game Two, with Bartolo Colon going against Pedro Martinez.

In the other American League Division Series game, Johan Santana of the Minnesota Twins shut out the New York Yankees, 2-0.

“We had some heartache last year,” said Johnny Damon. “Now we have something to prove. We want to be known as a team that rewrites the history books. We feel like we can win every game, we feel like we have to have fun., and I think that’s why this team is liked by so many people.”4

Mike DiGiovanna summarized the game in the Los Angeles Times: “The foundation on which this Angel season was built — sturdy starting pitching, door-slamming relief, airtight defense, an opportunistic offense — crumbled in two innings Tuesday, leaving the team’s World Series hopes on shakier ground.”5 He added, “Not only did the rally suck the air right out of those noise sticks, it put the Angels in a position of having to beat Red Sox right-hander Pedro Martinez tonight or face the daunting task of traveling to Fenway Park, where the Angels were swept in a three- game series five weeks ago, in a 2-0 hole in the best-of-five series.”6