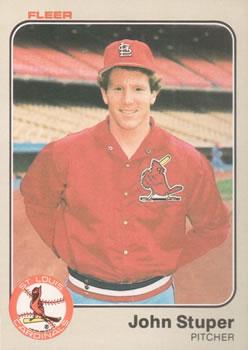 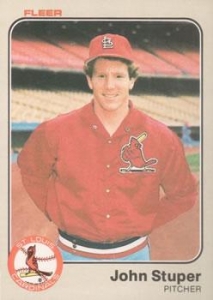 A confrontation for the ages: Bruce Sutter vs. Mike Schmidt. Two future Hall of Famers with first place on the line.

Let’s set the stage: It’s September 14, 1982, and the Philadelphia Phillies, winners of the National League East Division four of the last six seasons, are in their familiar position atop the standings with an 80-63 record. But their lead is merely a half-game over the St. Louis Cardinals (79-63),1 who are striving to reach the postseason for the first time since they captured the 1968 NL pennant.2 Only a half-game had separated the two teams over the previous week.

The Phillies had leap-frogged the Cardinals for the top spot a day earlier by winning the opener of a three-game series at Veterans Stadium, 2-0 — a three-hit shutout by another future Hall of Famer, Steve Carlton, his 20th win of the season.3 With that loss the Cardinals drop to 4-7 in September, and they go from being up 3½ games on September 1 to trailing by a half-game.4

The middle game of the series turned into another pitchers’ duel, between Philadelphia veteran Mike Krukow and St. Louis rookie John Stuper. Krukow had come to the Phillies in an offseason trade with the Chicago Cubs,5 and at age 30 he was having the best season of his career to date with a 12-9 record and a 3.06 ERA. The 25-year-old Stuper had joined the St. Louis rotation at the beginning of June after being called up from the Cardinals’ Triple-A farm club in Louisville, Kentucky.6

Through 7½ innings the Cardinals led, 2-0, on a two-run homer by Darrell Porter. But the Phillies threatened in the bottom of the eighth. With one out, Stuper walked pinch-hitter Bob Molinaro and allowed a single to Pete Rose. St. Louis manager Whitey Herzog summoned Sutter from the bullpen, and Philadelphia loaded the bases when Gary Matthews reached on an infield single between shortstop and third. Cardinals third baseman Ken Oberkfell, customarily guarding the line in the late innings, made a deft play to keep the hard-hit ball on the infield. He initially thought about throwing to second and was late with his throw to first.7

Next up was Schmidt, the reigning two-time NL Most Valuable Player and the current league leader in on-base percentage and slugging percentage, who had doubles in two previous at-bats against Sutter in 1982. Sutter quickly jumped ahead with two strikes. Schmidt fouled off the third delivery, took two balls, and fouled off another offering. On his seventh pitch, Sutter induced a 1-2-3 double play, with the split-fingered fastball maestro fielding the softly hit one-hop groundball and throwing home to Porter to force out Molinaro. The subsequent throw to first baseman Keith Hernandez retired Schmidt to end the inning with the lead intact.

“I just sit there and watch it,” Herzog said of such tense moments. “I just about puke a lot of times. But what are you going to do? You’ve just got to hope.”8

Sutter worked around a one-out ninth-inning walk to George Vukovich to earn his NL-leading 32nd save and wrap up the 2-hour, 20-minute affair before a crowd of 32,854. The Cardinals moved back into first place by a half-game, and they remained there for the balance of the season.

“This wasn’t a case of a must-win situation,” Porter said, “but it certainly helps us a lot, after the way Carlton beat us, to come back and win the same way the next night.”9

Sutter, from Lancaster, Pennsylvania, 80 miles west of Philadelphia, had not been his sharpest of late, blowing save opportunities and being tagged with losses in back-to-back games at San Francisco on September 3-4. The Giants’ Jack Clark socked a three-run walk-off homer against Sutter in the latter game.10

Naturally, the biggest topic of conversation postgame was the clash between the NL’s top power hitter and premier relief ace.

“I honestly feel he’s the best hitter in the league,” Sutter said of Schmidt, who came into the game batting .304 with 33 home runs (third in the NL) and 83 RBIs. “The last two years, it seems to me he’s hit a lot of home runs when they needed them.”11

Offered Schmidt about Sutter: “He’s at his best when the hitter has a lot of pressure on him. The first couple of swings, I jumped at it too much. Then, a tap back to the mound. I’d have been better off striking out.

“But it was fun … facing the best relief pitcher in the league with the ballgame on the line. He won our little battle tonight. … It was one heckuva at-bat. I’ll probably have some trouble getting to sleep tonight thinking about it.”12

Stuper was sensational. He scattered four hits (all singles) with three walks and three strikeouts, while improving his record to 7-6 to go with a 3.43 ERA. Two of the hits he gave up were by Krukow. Stuper worked perfect innings in the first, second, sixth, and seventh. The Phillies loaded the bases with one out in the fourth, but Stuper worked out of the jam by getting Garry Maddox to pop out to first base and Manny Trillo to fly out to right field on a combined three pitches.

“Games like this make you a little nervous before the game,” Stuper said. “But once you get out there, you don’t feel it, you can’t think about it.”13

Rose, the all-time NL hit king, assessed Stuper thusly: “He’s a typical 1982 pitcher. When I broke in, they just wanted kids who could throw hard, but now they’ve got coaches in Little League teaching them how to throw breaking balls so they know how to pitch when they get up here.”14

Porter’s ninth home run of the season, which came on a 3-and-2 changeup from Krukow, scored George Hendrick, who had walked with one out.

“He had struck me out with a 3-2 off-speed breaking ball on my first at-bat, and I had made up my mind to stay back and look for it on my next at-bat,” Porter said. “If he threw me all fastballs then, he would get me, but I wasn’t going to look foolish again on a breaking ball. He threw me three fastballs in a row, and I was beginning to worry. But I finally got the changeup and hit it well.

The Cardinals won the series the next day with an 8-0 victory — a three-hit shutout by Joaquin Andujar. In the three games, St. Louis pitching limited Philadelphia to two runs and 11 hits (in 85 at-bats for a paltry .129 average). Nine of the hits were singles.

From there St. Louis swept a five-game series against the New York Mets at Shea Stadium that included two doubleheaders — while Philadelphia lost two out of three at home to the Pittsburgh Pirates — pushing the Cardinals’ lead to 4½ games by September 19. Any opportunity the Phillies had to get back in the race with two weeks to play was essentially snuffed out when they split a two-game series with the Cardinals at Busch Stadium on September 20-21. The Cardinals clinched the division title with a 4-2 win at Montreal on September 27 and finished with a 92-70 record, three games ahead of Philadelphia.

St. Louis went on to sweep the Atlanta Braves in three games in the NLCS and defeat the Milwaukee Brewers in an exciting seven-game World Series.

Stuper, who finished the regular season with a 9-7 record and a 3.36 ERA, was a World Series hero, outlasting two rain delays to pitch a complete-game four-hitter in Game Six — a 13-1 win that lasted exactly five hours from beginning to end — and force the deciding game. Sutter led the league with a franchise-record 36 saves en route to winning his third NL Fireman of the Year Award and placing third in the NL Cy Young Award voting. He struck out Brewers slugger Gorman Thomas for the final out of the World Series.

1 The Montreal Expos were in third place, 2½ games out, and the Pittsburgh Pirates were fourth, four games out.

2 The Cardinals had been in first place every day from August 12 to September 12 except for September 10.

4 The Cardinals scored just 27 runs in their first 11 games of September, an average of 2.45 per game.

5 Krukow was acquired from the Cubs along with cash on December 8, 1981, in exchange for catcher-infielder-outfielder Keith Moreland and pitchers Dan Larson and Dickie Noles.

6 In eight starts for Louisville, Stuper was 7-1 with a 1.46 ERA, five complete games and two shutouts.

7 In his St. Louis Post-Dispatch game story, Rick Hummel noted, “Had Oberkfell been playing in customary position, Matthews’ ball would have been a double play.”

10 Sutter allowed four earned runs in his first 4⅓ innings in September (three outings). He pitched a scoreless inning to earn a save on September 11 against the New York Mets, beginning a stretch of 14⅓ innings in which he permitted only two unearned runs the rest of the regular season.

17 Porter batted .224 with six home runs and 31 RBIs during the strike-shortened 1981 season and was batting .229 with eight homers and 40 RBIs coming into this game.

18 Krukow finished his lone season in Philadelphia with a 13-11 record and a 3.12 ERA. He was traded to the San Francisco Giants along with pitcher Mark Davis and minor-league outfielder C.L. Penigar on December 14, 1982, for pitcher Al Holland and second baseman Joe Morgan.