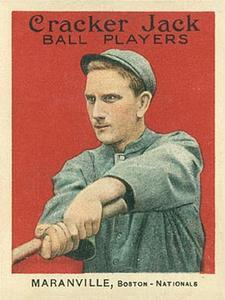 It took almost three full seasons before any Boston player hit a grand slam at the park. But it wasn’t a Red Sox player who hit the grand slam, and it didn’t even happen in an American League game. It was shortstop Rabbit Maranville of the National League’s Boston Braves.

The Braves were on their way to the pennant in 1914 and played a number of games at Fenway Park, which had a much larger capacity than their home South End Grounds. On September 26, they hosted the Chicago Cubs and drew 22,000 to the Saturday doubleheader.2

It was their fourth doubleheader in four consecutive days. That said, it was a good stretch for the “Miracle Braves”—they went 6-1 with a tie in the eight games.

After finishing fifth in the NL in 1913—an improvement over four consecutive last-place finishes from 1909 through 1912—the 1914 Braves were in last place on July 4, 15 games behind the first-place New York Giants.

Then came the miracle, with 45 wins in their next 58 games putting them in first to stay by September 8. The Braves kept on winning, and after sweeping a doubleheader from the Cincinnati Reds on September 25 held a comfortable 7½-game lead over the second-place Giants, with 14 games to play. The Cubs were in fourth place, 11 games behind.

Braves manager George Stallings had Lefty Tyler start the first game of the twin bill. The Cubs’ Hank O’Day countered with his own left-hander, Hippo Vaughn.3

Center fielder Tommy Leach singled to lead off for the Cubs, but he was picked off first, 1-3-6. Tyler struck out the next two batters. In the bottom of the first, right fielder Les Mann led off with a single. Johnny Evers sacrificed him to second, but Tyler retired the next two batters.

After the Cubs were set down in order in the second inning, second baseman Butch Schmidt singled for the Braves, but was forced at second.

With one out in the Cubs third, Roger Bresnahan was walked, but too was picked off, Tyler to Schmidt. The Braves went down in order. It was 0-0 after three.

Chicago mounted a threat in the fourth when Leach walked and right fielder Wilbur Good was hit by a pitch. First baseman Vic Saier grounded back to Tyler, who threw to Red Smith at third base for a force out. Second baseman Heinie Zimmerman hit into a double play.

The Braves mounted their own threat, and cashed in. With one out, center fielder Possum Whitted reached on a fielding error by Zimmerman. Schmidt drew a base on balls. Smith hit a long fly ball to Frank Schulte in left, but Schulte dropped it for the Cubs’ second error of the inning. The bases were loaded, without benefit of a base hit. And Maranville was up, in his second full season in the majors. He had broken in late in 1912 at age 20, was third in the MVP voting in 1913, and was on his way to placing second in 1914.

The Boston Globe’s James C. O’Leary explained what happened next: “‘The Rabbit’ shot a hot grounder past Zimmerman, which took a crazy hop as it came to [right fielder] Good and also shot past him and was going so fast that Good never tried to overtake the ball. He could not have caught up with it if he had tried until it stopped rolling, and he did not even try. The hit was good for a homer and four runs, which really settled the game.”4

The Chicago Tribune correspondent called it a “scratchy home run” and grumbled that the ball “went by Good absolutely and had to be scored as a home run, although Good made no effort to field the ball after it had passed him. Fast work by Good would easily have held Maranville at third.”5

The Boston Herald wrote that the Cubs “never had a chance” against the Braves all afternoon, but as to Maranville’s homer, agreed the ball had bounded away from Good and rolled to the bleachers. Good “was not overexerting himself chasing the ball, evidently believing he couldn’t prevent Maranville from getting a home run on it.”6 The Herald writer noted that Pete Knisely “shortly afterward supplanted Good in right.” O’Day had perhaps wanted his fielders to show a bit more hustle, even if in what might have been a lost cause.

The Cubs scored their only two runs of the game in the sixth. Leach singled, Knisely singled, and Saier walked. Zimmerman singled to left field, driving in two runs to cut the deficit to 4-2. But Chicago managed only one more hit off Tyler, a seventh-inning single by Bresnahan. He was stranded on first base and Tyler otherwise closed out the game.

The Braves scored their final two runs in the bottom of the eighth. Whitted hit a single. Schmidt bunted back to Vaughn, and both were safe as Vaughn’s throw to second base was off the mark. Whitted then stole third, when Vaughn’s pickoff attempt failed to get him. Maranville flied out to Schulte, but Whitted had to hold. Smith hit a deeper fly to Leach in center, and Whitted tagged and scored. Catcher Bert Whaling then doubled to Fenway Park’s left-field embankment, and drove in Schmidt.7

The final score was 6-2, Braves, and they had outhit the Cubs, nine hits to six. The Braves had played error-free ball; the Cubs committed four errors.

With the loss, the Cubs were officially eliminated from pennant contention. The Braves won the second game, 12-2, scoring four in the first, four in the second, and two more each in the fourth and eighth. Smith and Whitted both drove in three runs. The two Cubs runs came in the top of the ninth.

The 1914 Braves were 8-3 with a tie over their final 12 games and won the pennant handily, finishing 10½ games ahead of the Giants. They swept the World Series—their two home games played at Fenway Park—from the Philadelphia Athletics.

The first grand slam hit by an American League ballplayer at Fenway Park came more than nine years after the park opened, hit by Tillie Walker of the Philadelphia Athletics on September 3, 1921.8

The first grand slam by a Red Sox player at Fenway Park was hit more a dozen years after the inaugural game, hit by Ike Boone on May 30, 1924.

Thanks to the late David Vincent, who inspired a collaboration that was co-authored: Bill Nowlin and David Vincent, The Ultimate Red Sox Home Run Guide (Burlington, Massachusetts: Rounder Books, 2009), and to Tom Ruane for providing information about the first Fenway Park grand slams.

2 The capacity of the South End Grounds was 11,000. Braves Field opened in 1915, with a capacity of 43,250. It then offered more seats than Fenway Park’s 32,000—and the Red Sox played home games in the 1915 and 1916 World Series at Braves Field. Capacity figures are from Philip J. Lowry, ed., Green Cathedrals (Phoenix: SABR, 2019). For more information on Braves Field, see Bill Nowlin and Bob Brady, eds., Braves Field: Memorable Moments at Boston’s Lost Diamond (Phoenix: SABR, 2015).

7 In its earlier years, there was an embankment up against Fenway Park’s left-field wall, known as Duffy’s Cliff.

8 It was a seventh-inning grand slam hit off the Red Sox’ Allen Russell. Walker drove in six runs that day, but the Red Sox still won the game, 11-10. Walker had been a member of the 1916 World Series champion Red Sox and played for them in 1917 as well. In his 234 regular-season games for the Red Sox, he hit five home runs. His June 20, 1916, homer was the only home run hit at their home ballpark by any member of the Red Sox during the entire season. In 1922, with the Deadball Era over, he hit 37 homers for the Athletics.