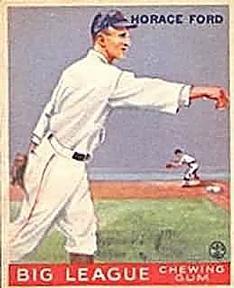 Horace “Hod” Ford made his adopted hometown of Somerville, Massachusetts,1 very proud throughout the spring and summer of 1921. Ford, who turned 24 in midseason, claimed the starting second-base job for the Boston Braves and hit .279, leading the team in doubles with 29. He also led all National League second basemen in fielding percentage (.973).

Between games of a September 27 doubleheader against the Brooklyn Robins, the Boston-adjacent city of Somerville feted its favorite son with a “day” at Braves Field. Mayor Charles Eldridge presented Ford with an “immense loving cup” and a traveling bag, as a brass band played and a proud contingent of Somerville residents looked on.2

Ford gave his supporters a game to remember. Starting at shortstop,3 he started a triple play, took part in three double plays, and went 3-for-4 at the plate. Unfortunately, the rest of the Braves didn’t perform at the same inspired level, and the Robins walked away with an easy 8-0 victory.

Only a few days remained in the regular season, and both teams were well out of contention. Manager Fred Mitchell’s Boston team entered the day in fourth place with a 78-71 record, 14½ games behind the first-place New York Giants. Wilbert Robinson’s Robins, the defending National League champions, sat in fifth place with a 73-74 record, 18½ games back.

The Braves and Robins were quite evenly matched: Each team won 11 of its 22 games against the other in 1921. Boston put 108 runs on the scoreboard against Brooklyn, while the Robins scored 107 against the Braves. Fittingly, the teams split the September 27 doubleheader. Boston took the first game, 8-5, behind the six-hit pitching of Dana Fillingim and a four-hit, four-RBI, three-triple day by center fielder Ray Powell. Ford started at shortstop in the first game and went 0-for-4.

Left-hander Garland Braxton, making the 17th and last appearance of his rookie year, started the second game for Boston. He brought a 1-2 record and a 4.91 ERA into the game, his first appearance against Brooklyn.

The Robins countered with veteran southpaw Clarence Mitchell, who entered with a 9-9 record and a 3.24 ERA. Mitchell pitched in 37 games that season, including 18 starts, 13 complete games, and a league-leading three shutouts. He pitched against Boston seven times—including a subsequent start on October 1—and won three of those games against no losses. He’d picked up his first win of the season in a 4-2 complete-game victory over the Braves on April 22 in Brooklyn.

Mitchell was one of 17 pitchers allowed to keep throwing the spitball after the major leagues outlawed the pitch in 1920. Eventually, he became baseball’s last legal left-handed spitballer.4 Mitchell is also remembered as the Brooklyn batter who lined into the unassisted triple play turned by Cleveland’s Bill Wambsganss in the 1920 World Series—still, as of June 2021, the only unassisted triple play in World Series history.

Both members of the two-man umpiring crew were nearing the ends of their careers. Bill Brennan had left the NL amid controversy in 19135 to become chief umpire of the Federal League. Viewed as disloyal, he found a return to the NL difficult, but managed to arrange a single additional season in 1921. He umpired only two more major-league games after this one. Bob Emslie, meanwhile, was 62 years old, with a professional baseball career that went back to the 1883 Baltimore Orioles. The 1921 season was his last as a regular NL arbiter, though he subsequently worked 38 games in 1922, 6 in 1923, and 4 in 1924.

With a Tuesday crowd of somewhere between 3,000 and 4,500 fans watching,6 Brooklyn jumped out to a 1-0 lead in the second inning. First baseman Ray Schmandt drew a walk. One out later, catcher Zack Taylor’s groundball rolled through Ford’s legs for an error,7 putting Schmandt on second and Taylor on first. Mitchell hit a single off the glove of first baseman Walter Holke that brought Schmandt home with the only run Mitchell would need that day.

Ford got the Braves started with a leadoff double in the third inning. But when he tried to advance to third on catcher Mickey O’Neil’s grounder to shortstop, Ford was hit by the ball for an automatic out. Mitchell retired the next two Braves to end the inning.

Schmandt led off the Robins’ fourth by reaching base on an error by third baseman Tony Boeckel. Shortstop Hal Janvrin, formerly a regular with the crosstown Red Sox, drew a walk. That brought Taylor to the plate. The catcher hit a line drive right at Ford, who was covering near second base to hold Schmandt near the bag. Ford caught the liner, stepped on second to retire Schmandt, and threw to Holke at first to triple off Janvrin. “Like most triple plays it appeared so extraordinarily easy that the three thousand fans present wondered why triple plays were not as frequent as thefts of motorcars,” the Brooklyn Daily Eagle reported.8

Ford also served as middleman on a 4-6-3 double play that ended the Robins’ fifth inning. With one away in the bottom half, he singled to shortstop, but was thrown out at third by Schmandt following an error by Janvrin. The play is not described in newspaper accounts, but it appears from box scores that Ford hit a groundball single to short, drew an errant throw, and tried to parlay the error into one base too many.

The Robins pulled away in the sixth. Left fielder Zack Wheat singled, moved up a base on a groundout, and came home on a single by Schmandt. Janvrin singled to center and took second base on a throw to third. After a walk loaded the bases, pitcher Mitchell drove home two more runs with a single to center field. The Robins led 4-0.

Brooklyn kept it up in the seventh as third baseman Jimmy Johnston singled, advanced on a groundout, stole third, and scored on another single by Wheat for a 5-0 lead. Ford collected his third and last hit in the bottom of the seventh, and again served as the middleman of a double play—this one of the 1-6-3 variety—to end the top of the eighth.

Righty reliever Cy Morgan came on to pitch the ninth for Boston. Like Ford, he was a Massachusetts product; and like Braxton, he too was appearing in the 17th and last game of his rookie season.9 It started poorly. The first four Brooklyn batters notched a walk, an infield single, a double, and a triple, adding three runs to make the Robins’ lead 8-0. Morgan finally retired a batter on a groundout, then issued another walk. Janvrin was up next, and he thoughtfully provided the Somerville fans with one final highlight: Ford fielded his grounder and started an inning-ending 6-4-3 twin killing.

Mitchell was still on the mound when the Braves came up for their last turn at bat. He’d allowed nine hits, but the Braves “could not combine any of the wallops for a single tally.”10 With one away he surrendered his only walk of the game, to Boeckel, but then retired Holke on a grounder. That brought Ford to the plate, and he ended matters with a pop fly to second baseman Ivy Olson. Mitchell earned his 10th win and his second straight shutout in 1 hour and 45 minutes of play, while Braxton took the loss to fall to 1-3.

Although Ford’s day included an error and two misadventures on the basepaths, news accounts of the game praised his effort. According to the New York Times, Ford’s play “was one of the outstanding features of the contest.”11 The Boston Globe added that “the modest Somerville boy” was “conspicuous in the play throughout the afternoon.”12

Ford went on to play 15 years in the majors, also appearing with the Phillies, the Robins, the Reds, and the Cardinals before finishing with the Braves in 1932-33. In another tribute to his local popularity, Ford was honored in September 1932 with a testimonial dinner whose attendees included Hank Gowdy, Johnny Evers, and Al Lang, the St. Petersburg, Florida, politician and businessman who played a major role in making the state a hub for spring training.13 Ford settled in the Boston suburb of Winchester, not far from Somerville, where his performance in local golf tournaments occasionally drew notice from newspapers.14 He died in Winchester at age 79 in January 1977.

Image of 1933 Goudey card #24 downloaded from the Trading Card Database.

1 Ford was not technically a Somerville native; he was born in New Haven, Connecticut. The Brooklyn Daily Eagle (see note 7) described Ford as a former baseball star at Somerville High School.

4 Mitchell, who pitched until 1932, was the last active lefty from the group of 17 pitchers given “grandfathered” permission to throw the spitball. Three right-handers outlasted him: Red Faber, Jack Quinn, and Burleigh Grimes.

5 The controversy involved an August 30 game between the Giants and Phillies that Brennan ordered forfeited to the Giants. The league office subsequently overturned Brennan’s decision. More information is available in Brennan’s SABR biography, written by David W. Anderson.

9 Morgan appeared in only two additional big-league games, both in 1922. He was born and died in the small Massachusetts town of Lakeville, which is in a roughly triangular location between Brockton, Plymouth, and New Bedford in the southeastern part of the state. The adjoining town of Middleborough claims Morgan as a native son, according to his SABR biography, written by Dick Thompson.