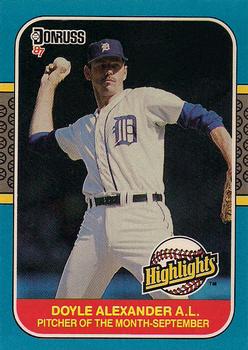 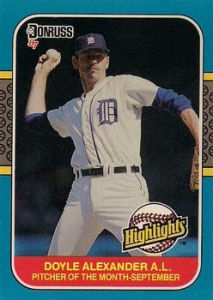 Detroit’s management was searching for answers to the team’s 10-18 start in 1987, which left the Tigers in sixth place in the AL East, 10 games out of first, on May 9. The Tigers’ roster featured Kirk Gibson, Alan Trammell, Lou Whitaker, and Jack Morris, all familiar names from Detroit’s 1984 World Series championship club. “I still think we have a very good team,” said manager Sparky Anderson. “But there’s something missing.”1

The Tigers improved over the next three months, adding free agent Bill Madlock, and trailed Toronto by only 1½ games on August 12. Still, management sought one final addition for the stretch run.

Detroit traded for veteran pitcher Doyle Alexander (5-10 with a 4.13 ERA with Atlanta), giving up 20-year-old minor-league pitcher John Smoltz (4-10, 5.68 ERA with the Double-A Glens Falls Tigers). “I think it’s obvious that Doyle Alexander is a proven starting pitcher,” said general manager Bill Lajoie. “We want to make the starting rotation as strong as we can. The opportunity was there, we had to make the deal.”2

After a no-decision in his first appearance for Detroit, on August 15, Alexander won eight straight starting assignments as the Tigers and Blue Jays battled for first place. When they arrived in Toronto on September 24 for the start of a four-game series, Detroit was a half-game behind the Blue Jays. Toronto won each of the first three games by one run, scoring three runs in the bottom of the ninth to win a nationally televised game on Saturday, September 26, 10-9. The Tigers faced the prospect of falling 4½ games behind with only a week left in the season if they lost the next day.

Alexander (8-0, 1.40 ERA for Detroit) faced Toronto’s Jim Clancy (15-10, 3.60 ERA) in Sunday’s series finale. Clancy retired the Tigers in order in the first. Blue Jays leadoff batter Nelson Liriano singled to right field in the bottom of the inning. One out later, Liriano stole second. After Rance Mulliniks walked, George Bell singled to left, scoring Liriano to give the Blue Jays the early lead, 1-0.

The Tigers hit two-out doubles in the second, fourth, and fifth innings, but Clancy kept Detroit scoreless, retiring the next batter each time. Alexander did not allow a baserunner in the second, third or fourth innings. In the bottom of the fifth, consecutive two-out singles put Toronto runners at first and second base, but the inning ended when Lloyd Moseby grounded out to first.

A one-out single by Darrell Evans and a two-out walk to Trammell put Tigers runners at first and second base in the sixth, but a groundout to second ended the threat. Alexander walked the Blue Jays’ first batter in the bottom of the inning. One out later, Ernie Whitt hit into a groundball double play. Both teams were kept off the basepaths in the seventh and eighth innings.

Tom Henke faced Gibson to start the top of the ninth with the score still 1-0 in Toronto’s favor. The American League leader in saves (34), Henke had relieved Clancy at the beginning of the eighth inning and retired the side in order. But in the ninth Gibson hit a 1-and-1 fastball to deep right for a home run, tying the game. “It was basically the same pitch I struck him out on in the first game (Thursday night),” said Henke afterward. “But he might have been looking for it this time.”3

After Gibson’s homer, Henke retired the next three Tigers. Alexander, who hadn’t allowed a hit since the fifth inning, set the Blue Jays down in order in the ninth. A bunt single and a sacrifice put a Tigers baserunner at second with two outs in the top of the 10th. Rookie David Wells relieved Henke. Whitaker hit a pop fly to the shortstop for the final out. Toronto put runners on first and second with two out in the 10th after a single and a walk. Alexander remained on the mound to face Liriano, who flied out to left.

Jeff Musselman replaced Wells to start the 11th. Detroit’s first batter, Evans, hit a 3-and-2 pitch to right-center4 for a home run, giving the Tigers the lead, 2-1. The inning ended when Gibson, who had singled after the home run, was thrown out attempting to steal second on the third strike to Matt Nokes.

Alexander struck out Moseby to start Toronto’s half of the 11th, but pinch-hitter Juan Beniquez reached first on an error when his grounder up the middle bounced off Trammell’s glove.5 Kelly Gruber ran for Beniquez. After Bell’s fly out to center, Whitt walked, putting runners at first and second. Jesse Barfield singled between short and third,6 scoring Gruber to tie the game, 2-2. Willie Hernandez relieved, walking Willie Upshaw to load the bases with two outs. Mike Henneman relieved and retired pinch-hitter Fred McGriff, a 23-year-old who already had 20 home runs in his first major-league season with substantial playing time, on a fly out to right to end the inning.

Jose Nunez, Toronto’s fifth pitcher, retired the Tigers in order in the 12th. Henneman stayed on the mound for Detroit and did not allow a baserunner in the bottom of the frame.

Nunez began the 13th inning by walking Jim Walewander, who had entered the game in the eighth to play third base. After a sacrifice by Whitaker, Evans was intentionally walked. Gibson hit a blooper to center. Moseby charged the ball, but it landed in front of him, bouncing on the artificial turf over his head. Shortstop Manuel Lee retrieved the ball and threw home. Walewander had to make sure the ball dropped in before taking off, but beat the throw home with a headfirst slide for the go-ahead run.7 Mark Eichhorn relieved and, after a two-out single loaded the bases, struck out Jim Morrison to prevent any further damage.

For a second time the Tigers were ahead by one run in extra innings. With one out in Toronto’s half of the 13th, Henneman hit Bell with a pitch, putting the tying run on first. Mark Thurmond relieved Henneman. Whitt grounded into a force out. Dickie Noles entered the game to face Barfield, and another groundball force out secured Detroit’s 3-2 win.

“It’s hard to say we’re disappointed because, basically, we accomplished what we wanted to do coming into the series, which was to take three out of the four games,” said Toronto’s Henke afterward. “But you never like to lose a game like this – especially to the team you’re playing against for first place.” He added, “We can’t look back now. We play three with the Brewers and then go to Detroit for three games, where we won two of three earlier this year. Right now, I’d rather be in our shoes than theirs.”8

“We lose this, that’s it,” admitted Detroit’s Evans after the game.”9 With the Tigers now trailing the Blue Jays by 2½ games, Gibson said, “I still wish we were in their position, but ours’ is a heck of a lot better position now that we’ve won.”10

The Tigers split their four-game series in Detroit against Baltimore, but still gained ground on the Blue Jays, who lost three straight at home to the Brewers. Detroit trailed Toronto by one game at the start of their season-ending three-game series with the Blue Jays at Tiger Stadium. Alexander was again matched against Clancy in Friday night’s opening contest. Despite allowing a three-run homer in the second inning, Alexander was the winning pitcher as Detroit responded with two runs in the second and two in the third for a 4-3 Tigers victory.

The teams were now tied in the standings. Detroit won Saturday’s contest, 3-2, with a one-out, bases-loaded single in the bottom of the 12th inning. The Tigers clinched the division title the next day, winning 1-0. A solo home run in the bottom of the second was the only score in a pitching duel between Detroit’s Frank Tanana and Toronto’s Jimmy Key.

The Tigers faced the Twins in the American League Championship Series. Alexander (9-0, 1.53 ERA for Detroit) was the starter for Game One in Minnesota, but the pitching prowess he displayed since joining the Tigers in August did not carry over to the playoffs. He was the losing pitcher in Games One and Five, allowing 10 earned runs in 9 innings, as the Twins won the ALCS in five games.

Alexander made the All-Star team in 1988 but struggled in the second half of the year. He was cut by the Detroit Tigers in December 1989 and never signed with another team. Smoltz made his big-league debut in 1988 and was elected to the Hall of Fame in 2015.