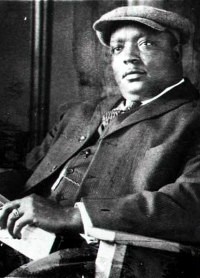 According to Phil S. Dixon, Andrew Foster was born the son of Andrew and Evaline Foster on September 17, 1879 in Calvert, Texas.2 Foster’s father was a preacher, while his mother was a respectful wife from Mississippi. The 1880 Census oddly lists Foster’s birth name as Bishop; only speculation exists as to the reason for the change in name to Andrew. 3 Although a member of the first African-American generation born free from the heinous institution of slavery, Foster’s childhood was still difficult as he and his family sought all the benefits of citizenship in the face of prejudice. Although Foster was born the fourth of sixth children, only he and two of his siblings, Christiana (born 1877) and Johnson (born 1884) survived until adulthood. (A younger half-brother, William “Bill” Foster, followed in Rube’s footsteps and was elected to the Baseball Hall of Fame.) The lives of Foster’s other siblings were taken by tuberculosis, a disease that undoubtedly impacted young Andrew’s interest in baseball. Foster himself said that “if it hadn’t been for playing ball and living outdoors, I don’t suppose I’d (be) here today.” 4 Physicians during Foster’s childhood indeed felt that spending time outdoors was the only way to avoid catching tuberculosis, a belief that only affirmed Foster’s interest in baseball.

Foster’s impact on the game we all know and love is often left in the background to the contributions of more famous players, managers, and executives. But Foster’s life in baseball helped revolutionize the game. In the words of author Robert Peterson: “If the talents of Christy Mathewson, John McGraw, Ban Johnson, and Judge Kenesaw Mountain Landis were combined in a single body, and that body were enveloped in a black skin, the result would have to be named Andrew (Rube) Foster.”12