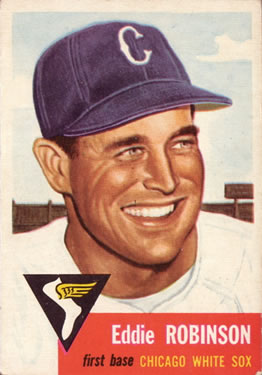 Anyone who has been to a baseball game in Chicago knows that the wind is a factor in the outcome of many games. If the Chicago wind1 is blowing in off Lake Michigan, only the strongest hitters can muscle one out. On the other hand, if the wind is blowing out, the hitters are smiling and the fielders just look up as balls fly over their heads into the hands of waiting fans.

Comiskey Park in the 1950s was certainly subject to the wind factor. Eddie Robinson, whose 65 years in professional baseball included a three-season tenure as the White Sox first baseman (1950-52), described the hitting situation there as “difficult” since the wind was often blowing in. But Robinson noted that if the players could smell the stockyards, that meant the wind was blowing from the south, which would help the hitters.2

The wind was blowing northwest at 17-22 miles per hour when the St. Louis Browns visited Comiskey park for a Wednesday doubleheader in the second week of the 1951 season.3 The combination of wind and a temperature of 60 degrees — and dropping — might explain the sparce attendance of 4,558, despite the bargain of a traditional doubleheader.4 Certainly White Sox fans might have been attracted by a potential easy victory or two over the 1-6 Browns (who were holding down their usual place at or near the bottom of the standings).5 The White Sox were 4-2, good enough only for fourth place but just 1½ games behind American League-leading Cleveland.

Randy Gumpert was making his second start of the year for the White Sox. He had pitched a shutout on April 20 against Detroit, allowing only three hits. But this outing did not go nearly as well. He allowed one-out singles to Johnny Berardino and Sherm Lollar in the top of the first. They both scored on Ken Wood’s two-out double. Jim Delsing flied out to end the frame with the Browns leading 2-0.

The White Sox came right back in the bottom of the first. Chico Carrasquel walked and stole second against Al Widmar. Widmar was also making his second start of 1951, although his ERA was 18.00 after a three-inning, six-run outing against the White Sox on April 19. Al Zarilla hit a one-out homer into the right-field seats to tie the game, 2-2. Robinson and Hank Majeski grounded out, keeping the score tied.

Neither team scored in the second. Gumpert allowed no Browns baserunners. The White Sox had runners on second and third, but Carrasquel flied out to leave them there.

The scoring picked up again in the third. Bobby Young singled and scored on Ray Coleman’s two-out triple, giving the Browns a 3-2 lead.

Again, the White Sox responded in the bottom of the inning. Zarilla worked a one-out walk. Robinson brought him home with a blast that left Comiskey Park over the right-field pavilion roof, and “at last report was still bounding towards Lake Michigan.”6

Robinson was the first White Sox player to hit one out of the park, although five visitors had previously accomplished that feat. Their names will be familiar to even the most casual of baseball fans: Babe Ruth, Lou Gehrig, Jimmy Foxx, Hank Greenberg, and Ted Williams.7 After Robinson’s blast, Majeski and Gus Niarhos grounded out, but the White Sox had a 4-3 lead.

Delsing hit a leadoff home run in the top of the fourth. That was all for the Browns that inning, so the score was tied again, 4-4.

Again, the White Sox responded in the bottom of the fourth. With one out, Nellie Fox and pinch-hitter Bud Stewart both singled. Carrasquel’s double to center scored them both and ended Widmar’s outing. Relief pitcher Duane Pillette walked Zarilla, but held the score at 6-4, White Sox.

The White Sox also changed pitchers in the top of the fifth. Dick Littlefield put two on with a walk and a single, but got two strikeouts and a groundout to get out of the inning. This was Littlefield’s first appearance for Chicago; he had started his career with the Red Sox in 1950, appearing in 15 games.

The White Sox threatened in the bottom of the fifth. Pillette got the first two outs, but allowed a single to Jim Busby and walked Fox and Littlefield to load the bases. The White Sox couldn’t capitalize: Carrasquel struck out.

The Browns got two on with one out in the top of the sixth. With a 3-and-2 count, Young stepped out of the box. Littlefield delivered a strike, Young was called out, and Hank Arft was caught stealing at third to end the inning. Browns manager Zach Taylor came out to argue — to no avail, of course. Taylor wasn’t the only one who had trouble with home-plate umpire Art Passarella. Widmar had been putting his hand in his back pocket, leading Passarella to suspect he was doctoring the ball.8

All Pillette allowed in the bottom of the sixth was a one-out double by Zarilla.

The scoring picked up again in the seventh. Lollar earned a one-out walk. Wood’s two-run homer tied the game, 6-6.

The home team had one more rally in them and regained the lead for good in the bottom of the seventh. Busby hit a one-out single to right and stole second. That put him in position to score on Fox’s double. Young’s mis-aimed relay throw to the plate allowed Fox to take third, positioning him to score an insurance run on Floyd Baker’s sacrifice fly. Carrasquel flied out, but the White Sox had an 8-6 lead.

In the eighth, Fritz Dorish took the mound to face his former teammates.9 Arft worked a leadoff walk but was erased on a double play, so Dorish faced the minimum.

Bill Kennedy pitched the final inning for the Browns, walking Robinson with two out and allowing a single to Joe DeMaestri (who had replaced Majeski at third base in the top of the eighth). Niarhos grounded out to leave the score at 8-6, White Sox.

Although the White Sox were in first place as late as July 20, they fell to fourth place the next day and held that position through season’s end, finishing 17 games behind the Yankees. The Browns finished in last place as usual, 46 games out.

So six of the 25 American League All-Stars were White Sox, five of whom appeared in this game. For those few hardy fans who braved the weather to stay for the second game of the doubleheader, a 7-4 win for St. Louis, they could add Ned Garver to the 1951 All-Stars they’d seen, since he pitched three innings in relief for the Browns.11

1 Chicago is called the Windy City, either as a reference to its weather, its braggadocious population, or both. Evan Andrews, “Why Is Chicago Called the Windy City?” history.com, September 1, 2018 https://www.history.com/news/why-is-chicago-called-the-windy-city. Retrieved December 29, 2020.

4 The second game was almost certainly moved from the next day (April 26) because that day was dedicated to a parade honoring General Douglas MacArthur. He was doing a hero’s tour of the US after his dismissal by President Harry Truman. Schools and government offices were closed for the day. Clayton Kirkpatrick, “Welcome Gen. MacArthur,” Chicago Tribune, April 26, 1951, Part 1, 1.

5 The Browns finished seventh of eight in the American League in 1950 and eighth in 1951.

9 He had pitched for the Browns in 1950 as a starter and a reliever. He started only four games for the White Sox in 1951, appearing in 28 as a reliever.