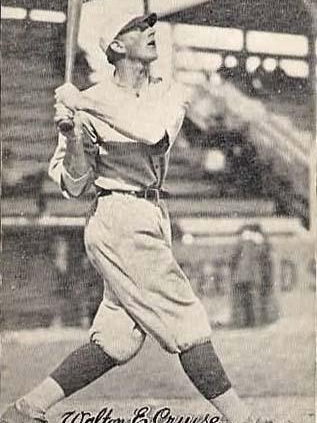 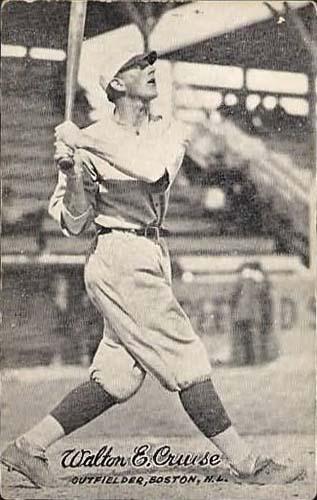 Following their “Miracle” National League pennant and World Series championship in 1914,1 the Boston Braves had slipped to seventh place by 1920. Skipper George Stallings was still at the helm, but that changed in 1921. When Stallings resigned in November 1920 to purchase a part-interest in the Rochester Colts of the International League,2 the Braves brought in Fred Mitchell to manage. Boston also did a significant player overhaul. On January 23, 1921, they traded popular shortstop Walter “Rabbit” Maranville to the Pittsburgh Pirates for three players and $15,000.

Two of the players acquired in the Maranville trade – shortstop Walter Barbare and right fielder Billy Southworth – moved into starting roles with the 1921 Braves.3 Hod Ford, a Boston reserve in 1920, became the everyday second baseman, replacing Charlie Pick, who left the major leagues for the Pacific Coast League. Third baseman Tony Boeckel stayed put, as did two members of the starting outfield from 1920, center fielder Ray Powell4 and left fielder Walton Cruise.5 Switch-hitting Walter Holke was back as the first baseman; Mickey O’Neil remained as the starting catcher, backed up by Hank Gowdy and Frank Gibson.

Right-hander Joe Oeschger was still the rotation ace, joined by Mule Watson, Hugh McQuillan, Dana Fillingim, and Jack Scott. Dick Rudolph, who had started 11 games in 1920, was now a coach.

On Tuesday, August 16, the 1921 Braves were in the early part of a three-week homestand when the Chicago Cubs came to town for a five-game series. Boston stood third in the National League, eight games behind Maranville’s Pirates. The Cubs were seventh, 26½ games back. Boston had won three in a row and was a comfortable 16 games over .500 at 61-45. Given the team’s improvement over 1920, there was a vague sense of pennant fever, at least in the Boston Globe – an August 17 sidebar was headlined “Moving Pennantwards” and began, “Watch the Braves!”6

With ground broken in March 1915 and construction completed for the inaugural game the following August,7 Braves Field had a “tiny stand in straightaway right [field] that could hold up to 2,000 fans. This became Braves Field’s most famous section, nearly unreachable by Deadball Era batters and known to one and all as the Jury Box, after a waggish sportswriter counted just 12 people in it one day.”8 The carry to straightaway right field was 365 feet in 1921; a four-foot wood wall topped by 10 feet of screen protected the Jury Box.9

The reported attendance for the August 16 game was 4,000; a reasonable assumption might be that the requisite 12 fans were in the renowned box, possibly as many as 16, as “Miss Agnes E. Barry and 15 children from the Bigelow Summer School were guests of the management” that day.10 Regardless of occupancy, the box made news that afternoon.

Through late July and into early August, the Cubs had lost nine of 11 games, resulting in a managerial change. Bill Killefer took over from Johnny Evers on August 4, when the Braves were visiting Chicago.11 Just two weeks into the job, Killefer had guided the club to a 2-9 record of his own. In Boston that afternoon, he tabbed his putative ace, Grover Cleveland “Old Pete” Alexander, to start. The 34-year-old right-hander and future Hall of Famer was still in midcareer but not displaying the form that saw him lead the National league in starts (40), wins (27), and ERA (1.91) in 1920. Thus far in 1921 he was 11-8, 3.41, as he took the ball against the Braves. Mitchell countered with 25-year-old righty McQuillan, (12-10, 3.16), a three-year veteran with Boston.12

The early going was tough for both pitchers. McQuillan navigated a scoreless first inning, but it wasn’t routine. Cubs leadoff hitter Max Flack opened with a single. He was forced at second on Charlie Hollocher’s groundball, but the Braves couldn’t turn a double play. Zeb Terry forced Hollocher at second, but when cleanup hitter Charlie Deal tapped back to McQuillan, the pitcher made a “careless toss” to first base that allowed the inning to continue. McQuillan was then able to settle down, fanning Turner Barber for the third out.13

Alexander didn’t fare as well when Boston batted in the first. Powell tripled to left field. Barbare walked. Southworth grounded into an unassisted out at first base as Powell held at third and Barbare moved to second. Then, facing cleanup hitter Cruise, Alexander dug himself a big hole. The lefty-swinging Alabama native drilled a line-drive, three-run homer over the wall and screen into the Jury Box. “This was the second time the stunt has been performed since the park was built, and Cruise was the one who turned the trick the first time,” the Boston Globe informed Braves fans not among the 4,000 that day.

Cruise had homered into the Jury Box on May 26, 1917.14 He had been a Cardinal when he did it in a 6-1 St. Louis win. That home run was a solo shot off the Braves’ Pat Ragan. It was described at the time as “the longest hit ever made at [then in its third year of use] Braves Field.”15

Down by crooked numbers with only one out in the first inning, Alexander encountered more trouble. After Cruise cleared the bases, both Boeckel and Holke reached on short singles. Ford hit a groundball wide of first base and the Cubs managed the second out of the inning when relay man Ray Grimes threw Boeckel, trying to score from second base, out at the plate on a close play. Alexander got O’Neil to fly out to end what could have been an even more tortured half-inning. It was 3-0, Boston.

But “before the Cubs were retired in their half of the second inning those same tallies looked like the last rose of Summer.”16 Barraging McQuillan with five hits, with a walk thrown in, Chicago plated five runs. The scoring blows were a two-run triple by Bob O’Farrell, a revenge single by Alexander, and – breaking the tie – Deal’s two-out, two-run double. That finished McQuillan; Mitchell brought in spitballer Fillingim.17 He walked Barber but avoided further scoring, getting George Maisel on a popup to third base.

The Cubs now led 5-3, and while Alexander was restoring order to keep Boston at bay through the second and third innings, his teammates manufactured another run in their fourth on a walk, a single, and a run-scoring groundout. Boston’s early three-run lead was now a three-run deficit, 6-3.

Surging back, the Braves wiped that out to tie the game in the bottom of the fourth. Fillingim got it started with a helpful leadoff single. Powell also singled, and after Barbare flied out, Southworth lashed a triple to the scoreboard in left-center field to score both Fillingim and Powell. Cruise then got solid wood on another pitch, sending a fly to deep center that allowed Southworth to stroll home.

Alexander had endured two three-run outbursts in four innings but was still in a tie game. He and Fillingim both managed scoreless fifth innings. But in the sixth Fillingim vexed Alexander with another leadoff single.18 Powell singled as well, and although Alexander was able to nip Fillingim at third base on Barbare’s bunt, that ended Old Pete’s day with one out and runners at first and second. Killefer called for rookie right-hander Buck Freeman, who got Southworth on a fly to center, then intentionally walked the red-hot Cruise to load the bases.

The Cubs could have been out of the inning when Boeckel chopped the ball just past Freeman and toward the shortstop-third base hole. The writer covering the game called it a “foozie”; third baseman Hollocher fielded it, juggled, then had no chance for a play anywhere. As the runners “had started with the beginning of Freeman’s windup,” Powell and Barbare both sped home with runs that put Boston ahead, 8-6.19

That was the ballgame. Fillingim finished a solid 7⅓ innings of relief by blanking the Cubs through the final three innings for a well-deserved win. It moved him to 11-6 for the season. The Braves didn’t score the rest of the way, either, but it didn’t matter.

The win bumped Boston 17 games over .500 and to 7½ games out. But as a bit of pennant fever simmered for any fans who remembered the magic of 1914, it broke soon enough. Four days later the Braves, still on the extended homestand, started a skid in which they lost nine of 10. By September 1 they had fallen into fourth place, 10 games back. They went 12-16 that month and, although they managed to hang on to fourth place by a game and a half over the Brooklyn Dodgers, they finished the 1921 season only five games better than .500, at 79-74.

Maranville and the Pirates, leading the New York Giants by 5½ games when play ended on August 16, faded as well. Finishing strong, the Giants won the pennant over Pittsburgh by four games.

Cruise’s Jury Box shot, which heralded Boston sportswriter Harold Kaese called the Braves’ “most notable homer” of their 1921 season, was his eighth of the season. He didn’t homer again that year, but did keep hitting, even as the Braves swooned. After the close of play on August 16 he was batting .354. Cruise finished the season at .346, good for fourth place in the 1921 American League – according to Kaese, “the season the ball was hopped up for Babe Ruth.”20

In addition to the sources cited in the Notes, the author used the Baseball-Reference.com and Retrosheet.org websites for player and team pages and daily player logs. James C. O’Leary’s game story from the August 17, 1921, Boston Globe, cited in the Notes, was useful for its play-by-play details to supplement the box scores:

2 “George Stallings Still in Doubt as to Lineup,” Rochester (New York) Democrat and Chronicle, April 10, 1921: 46. Stallings handled managerial duties for the club as well as being part-owner. The team was known as the Tribe for the 1922 through 1927 seasons, then became the more familiar Red Wings in 1928 when Rochester began a long affiliation with the St. Louis Cardinals organization. Stallings continued to manage Rochester until then. Billy Southworth managed the 1928 Rochester Red Wings.

3 The other player, Fred Nicholson, made the 1921 roster as the fourth outfielder and a pinch-hitter. He accumulated 272 plate appearances.

4 The Braves had one hop away that season, but still had one left. Powell was also nicknamed Rabbit.

5 Cruise had been acquired from the Cardinals in a cash deal early in the 1919 season. Reports from St. Louis were that “Boston Had Been After Cruise for Some Time.” St. Louis Post-Dispatch, May 18, 1919: 54.

15 “Doak’s Spit Ball Effective,” Miami Herald, May 27, 1917: 6. This may have been when the Braves began to consider acquiring Cruise.

18 Fillingim, who threw right-handed but batted left, did his part at the plate in 1921. He averaged .247 with 21 hits, 12 runs scored, 2 home runs, and 8 RBIs. He walked nine times against eight strikeouts. That was his best offensive season; for his eight-year career he managed a “pretty good for a pitcher” .209 batting average and had 26 RBIs.

20 Harold Kaese, The Boston Braves (New York: G.P. Putnam’s Sons, 1948), 186. Kaese was honored with the J.G. Taylor Spink Award by the Baseball Writers’ Association of America in 1976 and installed in the so-called writers wing (now called the Scribes and Mikemen exhibit) of the Baseball Hall of Fame during the 1977 induction ceremony.