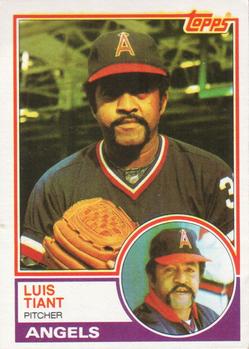 Even the most “ageless” ballplayers, the ones who hold their places in the game the longest, eventually fade away. Pitcher Luis Tiant’s time came in the late summer of 1982, when he made six final appearances and earned two last wins with the California Angels to wrap up a 19-season big-league career. The Cuban-born fan favorite’s last win featured a pitching performance straight out of his 1960s and ’70s glory days — while also giving him a measure of revenge against the Boston Red Sox, the team with which he is most associated.

Tiant had beaten the baseball reaper many times before. After he led the American League with a 1.60 ERA in 1968, Tiant went 9-20 a season later, leading the Cleveland Indians to deal him to Minnesota. The Twins wrote him off in 1971 due to injury. The Braves signed him for a month in 1971, then let him go.

Tiant finally regained his form with Boston, winning 122 regular-season games — and three more in the 1975 postseason — and achieving local-legend status before leaving via free agency after the 1978 season. After two seasons with the Yankees, he landed with the Pirates in 1981, but Pittsburgh released him after the season.

Finding no big-league takers as the 1982 season dawned, Tiant retreated to Tabasco of the Mexican League to stay in the game. In search of help down the stretch, the Angels came calling on August 2, and the unquenchable El Tiante was back in the majors for one last ride.

Tiant’s start against Boston on August 17 was his third game back, and he brought a 1-1 record and a 4.35 ERA into the game. In his previous start, he pitched seven innings of one-run ball to beat the lowly Twins. Manager Gene Mauch’s Angels needed all the guile the 41-year-old Tiant could provide as they navigated a tight American League West pennant race. The Angels entered the game with a 67-50 record, in first place, one game ahead of Kansas City and 2½ games up on the Chicago White Sox.

The Angels’ offensive stars included right fielder Reggie Jackson, who led the league with 39 home runs; third baseman Doug DeCinces, who hit 30 more; outfielders Brian Downing and Fred Lynn, who added 28 and 21 homers; and first baseman Rod Carew, who finished third in the batting race with a .319 average. All were in the lineup except DeCinces, who was nursing a stiff back and was spelled by Ron Jackson.1 The Angels employed two veteran catchers in starter Bob Boone and backup Joe Ferguson; Ferguson got the start.

The powerful Angels ranked second in the league in homers behind Milwaukee as of mid-August and were so potent that New York Yankees owner George Steinbrenner had accused them of using illegal corked bats. Designated hitter Don Baylor, another veteran basher in the Angels lineup, replied, “Hitting is contagious and so is winning.”2

The visiting Red Sox needed a win even more than the Angels. Ralph Houk’s club entered the day at 64-52, in second place, four games behind the Milwaukee Brewers in the AL East. Only 46 games remained to make a postseason charge. Many of Boston’s starters were teammates of Tiant during his time in Beantown. They included second baseman Jerry Remy, right fielder Dwight Evans, left fielder Jim Rice, designated hitter Carl Yastrzemski,3 and center fielder Rick Miller.

One notable newcomer was starting pitcher Bob Ojeda, a struggling 24-year-old left-hander. Ojeda pitched 6⅓ innings to beat the Angels on June 6 in his last effective start of the year. He appeared sporadically after that, and mostly out of the bullpen. Ojeda brought a 4-5 record and 5.28 ERA into the game.

A Tuesday night crowd of 38,051 settled in to watch the young lefty and the venerable righty go head to head. A group of family and friends from Ojeda’s hometown of Visalia, California, made themselves known in the stands.4 The Red Sox threatened from the start, as leadoff hitter Remy singled and stole second. But Tiant struck out Evans and Rice and got Yastrzemski to ground out to third.

Ojeda also struck out two batters in the first inning but surrendered two hits that gave California an early advantage. Carew singled with one out. Reggie Jackson struck out looking, one of his league-leading 156 K’s that year. Baylor homered to deep left field on a pitch one writer compared to a beach ball for a 2-0 lead.5 Lynn struck out looking to end the frame.

Boston put runners into scoring position in the second and third innings. In the second, first baseman Dave Stapleton singled and Miller walked. A fly out by shortstop Glenn Hoffman moved the runners up to second and third. But Tiant struck out catcher Gary Allenson to escape the inning. The Red Sox put two more runners on in the third on Remy’s double and a walk to Yastrzemski. This time, Tiant stifled the rally by getting third baseman Carney Lansford, the AL’s 1981 batting champion, to fly to right.

Tiant accomplished this with a style familiar to Red Sox fans, featuring a corkscrew windup and a trick bag of pitches thrown from varying arm angles. In the Boston Globe, Peter Gammons wrote that Tiant “whirled, purred, bobbed and marimba’d” his way through the Red Sox lineup, bewildering his former teammates by mixing a few fastballs with “a Filene’s Basement of off-speed breaking balls.”6

Ojeda could have taken lessons from Tiant on how to escape jams, as he ran into more trouble in the third. Downing led off with a no-doubt home run, described by the Los Angeles Times as “an orbital shot.”7 Carew and Reggie Jackson walked. A pair of fielder’s-choice groundballs from Baylor and Lynn brought Carew around to score, making it 4-0.

The Angels’ onslaught continued in the fourth. After a leadoff strikeout by Ron Jackson, second baseman Bobby Grich and Ferguson hit California’s third and fourth homers to make the score 6-0.

Venezuelan righty Luis Aponte replaced Ojeda and retired the next two hitters, but the Angels caught up to him in the fifth. Carew doubled, Reggie Jackson walked, and after Baylor flied out, Lynn hit the Angels’ fifth homer of the game for a 9-0 lead. Lynn, also a Red Sox refugee, was on a tear with 49 RBIs in his previous 35 games.8

During the fifth, the Sox gave two outfielders the rest of the night off. Evans and Rice, a combined 0-for-6 with five strikeouts, were replaced by Reid Nichols and rookie Wade Boggs, respectively. In a big-league career spanning 18 years and 2,439 games, this was Boggs’ only appearance in the outfield.

Tiant cruised through the middle innings, then briefly encountered trouble in the seventh. Miller singled to right, and two outs later, Remy’s single sent Miller to third. Again Tiant shut down the threat, getting Nichols to ground out to first base. Catcher Roger LaFrancois, whose major-league career consisted of eight games with the 1982 Red Sox, entered the game in the seventh as a pinch-hitter for Allenson. He popped out to third.

Lefty Bruce Hurst, also in his first full season, took over pitching duties for Boston for the last two innings. The Angels dented him in the eighth, pushing across a run on singles by Carew, pinch-hitter Juan Beniquez (hitting for Lynn), and Baylor to make it 10-0.

Tiant entered the ninth three outs away from his first shutout since July 1979 but couldn’t hold it. Stapleton reached on an error by backup second baseman Rob Wilfong, and Miller and replacement shortstop Julio Valdez hit back-to-back doubles to make it 10-2. It was Valdez’s eighth and final RBI in a four-season, 65-game major-league career.

Tiant gave way to lefty reliever Andy Hassler, who worked in 54 games out of the bullpen for the Angels in 1982. Hassler got LaFrancois to fly to left, struck out Remy, and got Nichols to ground to third to seal Tiant’s 229th and final major-league win. The game took 2 hours and 54 minutes.

After the game, the normally affable Tiant singled out Boston’s ownership for scorn: “The only reason this means a lot to me is two people — [Haywood] Sullivan and [Buddy] LeRoux.”9 In the Boston clubhouse, Evans said, “I wish we’d signed him.”10 To add to the Red Sox’ frustration, the Brewers lost that night against Oakland, which meant Boston had wasted a chance to gain ground.

The Angels went on to win the AL West by three games over Kansas City, while Boston came in third in the AL East, six games behind Milwaukee. Ojeda did not pitch again in 1982 but bounced back the next year to establish himself with 12 wins. Tiant made three more ineffective appearances for the Angels in which he surrendered 13 runs, all earned, in 11⅓ innings. He lost to Milwaukee in his last game, on September 4, and did not pitch in the Angels-Brewers AL Championship Series, won by Milwaukee.

3 During their years together in Boston, the gregarious Tiant referred to Yastrzemski as “Polacko.” See Mark Armour, “Luis Tiant,” SABR Biography Project.

9 Gammons. Tiant took a different tone in remarks to the Associated Press, saying: “I have nothing against Boston, especially their players. I have nothing to prove against them. I know they respect me like I respect them.” See Associated Press, “Angel Tiant Comes Back to Haunt His Old Buddies,” Desert Sun (Palm Springs, California), August 18, 1982: C1.