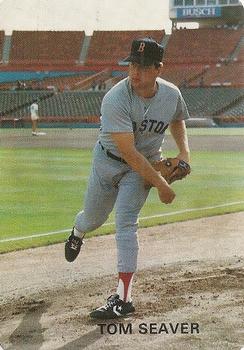 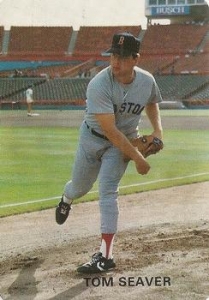 When Tom Seaver pitched his last game in a major-league uniform, Top Gun dominated the box office. Two other Toms starred in this 1986 blockbuster. Tom Cruise played a Navy fighter pilot striving to be “the best of the best” and Tom Skerritt played his mentor, a veteran pilot who flew with the young pilot’s father in the Vietnam War.

Once upon a time, Seaver was like Cruise’s character – full of impressive power, raw instinct, and superior skill.

By the mid-1980s, he had become the baseball version of Skerritt’s character – the seasoned pro who could immediately identify a batter’s quirks that would take rookies days to decipher. Seaver was best known for his stints with the Mets (1967-1977, 1983), which included a Rookie of the Year Award, three Cy Young Awards, and a World Series ring. But he also had great moments with other teams: a no-hitter with the Reds in 1978, his 300th career victory with the White Sox in 1985.

On August 18, 1986, the 41-year-old right-hander wore a Boston Red Sox uniform in his last career victory – the 311th entry in the win column for the pitcher whose delivery concluded with his right knee touching the dirt on the pitching mound.

Stamina was evident in the 3-1 victory over the Minnesota Twins; Seaver went 8⅔ innings, allowed three hits, walked four, and struck out seven. It kicked off a road trip against the Twins, Indians, and Rangers; Fenway Park’s sentinels brought a 5-5 record back to New England.

Seaver’s run support began early when Boston shortstop Ed Romero started the game with a single off southpaw ace Frank Viola, followed by second baseman Marty Barrett doubling him home. Viola – who led the 1986 AL in games started with 37 – then retired the heart of Boston’s batting order: Jim Rice on a groundout to third; Don Baylor with a strikeout; and Dwight Evans with another groundout, this one to second baseman Steve Lombardozzi.

The Twins had a significant opportunity with two men on base in the bottom of the first. Minnesota’s legendary center fielder Kirby Puckett – who made his first of 10 straight All-Star Game appearances in 1986 – led off with a single against Seaver and waited there as designated hitter Roy Smalley flied out to Tony Armas in center field.

Kent Hrbek got to first base safely on a groundball fielded by Bill Buckner, who tossed the ball to Lombardozzi to force Puckett at second base.

Seaver’s walk to Twins cleanup hitter Gary Gaetti put runners on first and second, prompting hopes of Randy Bush either advancing the runners or enhancing his RBI total. But Minnesota’s rally ended as Seaver got his first strikeout of the afternoon.

The Twins notched their first run in the third inning; Smalley knocked a solo home run with two outs. After the game, Smalley praised Seaver: “He made only two bad pitches – the one to me and one Randy Bush hit for a double in the ninth inning. And when he needed a fastball, he was able to rear back and throw it.”1

In the bottom of the fourth, Bush whiffed for the second time in the game. Smalley, too, struck out twice; Seaver’s other entries in the game’s “K” column were Lombardozzi, Gaetti, and Greg Gagne.

The Red Sox looked poised to score in the top of the fifth when Armas led off with a triple. But he remained at third base when Hrbek fielded Rich Gedman’s grounder to first for an unassisted out. Dave Stapleton attempted a sacrifice bunt down the first-base line, which resulted in Hrbek tossing to Lombardozzi covering first base. There wasn’t enough time for Armas to score. Romero’s grounder to Gagne ended the half-inning.

In the top of the eighth, a Boston rally percolated. Barrett drew a one-out walk; Rice’s grounder to Gaetti forced Barrett out at second. Rice advanced when Viola plunked Baylor; Evans entered the batter’s box with a fantastic opportunity and a recent stretch of prominence: 11-for-30 (.367) in his past 10 games.2 Minnesotans breathed a collective sigh across the Land of 10,000 Lakes when the slugger struck out.

The teams stayed at 1-1 until the top of the ninth; Armas singled and Gedman’s two-run bash brought the score to 3-1.

Seaver had limited the Twins to two hits until the bottom of the ninth. Looking for a complete-game victory, the veteran hurler fielded Hrbek’s grounder and struck out Gaetti. After Bush doubled, Red Sox skipper John McNamara sent in righty Bob Stanley to preserve the two-run lead. Tom Brunansky pinch-hit for left fielder and future “Moneyball” proponent Billy Beane; Stanley struck him out looking.

After the game, Viola praised his counterpart: “He comes up with a new pitch every time I see him. That’s what craftiness is.”3

Viola allowed eight hits and struck out two Boston players, Baylor in the first inning; Evans in the eighth.

Buckner was the busiest Boston player in the field other than Seaver. The first baseman had 13 putouts, nearly half of the team’s 27. At the plate, Armas was the most effective: 3-for-4 with one run scored.

Seaver’s three-hit performance was impressive, more so considering that he was in the waning years of an exemplary career. Former Mets teammate Jerry Koosman – who won two games in the Mets’ 1969 World Series victory against the Baltimore Orioles – noted the performance. “He is not the overpowering pitcher anymore that he was,” said the Minnesota native. “But he can pitch to spots and make the ball do something and keep hitters off stride. He was always a good student of the game.”4

Minnesota’s loss began a six-game homestand ending in a 2-4 record. It reflected the team’s subpar performance throughout the season, which finished with a 71-91 won-lost tally.

Seaver had come to New England in a June trade that some questioned, others scorned. The White Sox sent the veteran in exchange for Steve Lyons, a 26-year-old outfielder in his second major-league season; Seaver was 2-6 at the time of the trade. It was more a preventive measure than a strategic addition to Boston’s pitching roster. Red Sox manager John McNamara explained, “The big thing is that the Yankees didn’t get him.”5

Seaver even wondered about the trade, noting his subpar record and 4.38 ERA to date.6

Adding the veteran right-hander was a blessing. Dennis “Oil Can” Boyd’s three-week suspension and Bruce Hurst’s two-month benching with a groin injury plagued the team’s pitching. Though not the hurler of years past, Seaver served a purpose to fill the void. He went 5-5 in July and August.

Torn cartilage in the right knee ended Seaver’s career, with his last appearance coming on September 19, 1986 – a 6-4 loss to the Toronto Blue Jays. Seaver gave up three runs in four innings before leaving the game.

Boston vaulted to the AL East championship with a 5½-game lead over the second-place Yankees. They won the AL title in an epic seven-game ALCS against the Angels and faced the Mets in the World Series.

It was bittersweet for Mets fans to see their Tom Terrific at Shea Stadium wearing the opposing team’s uniform; a knee injury prevented the legend from taking the mound. The Red Sox lost in seven games; Seaver returned to the Mets the following spring for the third time, hoping to make the ’87 squad.

Despite the August performance against the Twins and the strength of sentiment, Mets fans said goodbye in June. “I would have loved to help this team win another world’s championship, but when I realized I couldn’t do a thing to help them, I didn’t want to create a logjam if they had to go out and get another pitcher,” said Seaver.7