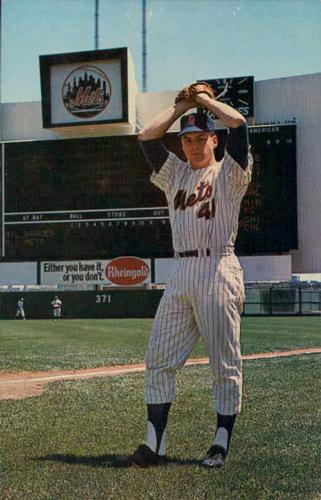 After four years in the National League cellar, the New York Mets finally moved up to ninth in 1966 when they finished 66-95, a gain of 13 wins over their previous season high. Their success, such as it was, pushed the Chicago Cubs to the bottom of the league when their 59-103 mark left them 7½ games behind the Mets. New York was looking to improve on that “success” in the league standings in 1967, as former St. Louis Cardinals general manager Bing Devine took over as team president that winter. Devine made numerous trades and the roster was significantly different from the previous year.1

One of New York’s most significant moves – both short-term and long-term – involved an addition to their pitching staff, which had finished 1966 with a 4.17 ERA, worse than everyone in the NL but Chicago. Into a rotation heavy with journeymen like Don Cardwell, Jack Fisher, and Bob Shaw, the Mets added one of the game’s rising phenoms: 22-year-old Tom Seaver. Seaver signed with the Mets in January 1966 after they won a lottery to sign him when his original contract with the Atlanta Braves was voided. Seaver spent 1966 with the Jacksonville Suns, where he finished with a 12-12 record while striking out 188 batters in 210 innings.

Mets manager Wes Westrum originally said that he was planning to break in Seaver gradually and use him in relief before giving him his first start. Westrum explained his reasoning during spring training in this way: “You can ruin a kid by trying to move him too fast.”2

But Westrum changed his mind when the season started, and he handed Seaver the ball on the second day of the season in a start against the Pittsburgh Pirates.3 Before that game, Westrum said, he told Seaver only that “they use the same bat and the same ball and the same home plate in the big leagues.”4 Seaver went 5⅓ innings that day against a lineup featuring future Hall of Famers Roberto Clemente, Willie Stargell, and Bill Mazeroski, defending batting champion Matty Alou, and six-time stolen-base champ Maury Wills, giving up two earned runs and striking out eight in a no-decision.

Westrum gave Seaver his second start when the Cubs arrived in town for a single game at Shea Stadium. The rookie got through the first two innings unscathed despite giving up singles in each frame. Billy Williams’s two-out single in the first yielded nothing when Seaver struck out a struggling Ron Santo, who had just three hits in 29 plate appearances since the season began. Randy Hundley’s one-out hit in the second also went for naught when Seaver got the next two batters to ground out.

The Cubs finally got the best of Seaver in the third. Don Kessinger singled with one out and came home on Williams’s two-out triple to the right-field corner. It gave the Cubs the lead, which they held until the fourth.

Leo Durocher’s Cubs had come out on top against the Phillies and Pirates to start the 1967 season, arriving in New York with a 4-3 record. Looking to continue their early-season success, Durocher sent veteran left-hander Curt Simmons to the mound. The Cubs had signed the 35-year-old Simmons midway through 1966 and he finished his 19th major-league season by going 4-7 with Chicago. Simmons won his first start of 1967 on April 14, a complete-game effort in the Cubs’ 8-5 victory over Pittsburgh. He had debuted in the major leagues in 1947, less than two months before Seaver’s third birthday. Simmons was one of the first postwar bonus babies when he signed with the Phillies. His start made the game a pitchers’ duel between bright stars from two generations.

Simmons kept the Mets off the bases in the early innings, giving up only a pass to Seaver in the third. But his shutout ended in the fourth when Tommy Davis hit his first home run of the year, over the left field fence.

It was also Davis’s first home run since joining the Mets. Davis, who had injury woes after his MVP-caliber season in 1962, arrived in New York as part of a four-player trade with the Dodgers in November 1966.5 A Brooklyn native, he had signed with his then-hometown Dodgers out of Boys High School in 1956 and played for eight seasons in Los Angeles. The Mets not only hoped that he might bring some power to their lineup but they also saw him as a mentor for the Mets’ young players.

The Mets grabbed the lead in the sixth. Cleon Jones, who was 1-for-23 for the season, led off with a single. He moved to second on Don Bosch’s sacrifice. Ken Boyer’s single and Cubs center fielder Byron Browne’s weak throw to the plate allowed Jones to score. Davis followed and lofted one to right center. Browne lost the ball in the wind; Davis ended up a double that left two runners in scoring position. After Tommie Reynolds ran for Davis, Simmons walked Jerry Buchek to set up a possible double play.

“The Mets might have had to settle for one run but again Browne came to the rescue,” the New York Daily News wryly observed. Ron Swoboda lifted a high fly ball to right field. “Browne, instead of letting [center fielder] Adolfo Philllips take it, practically grabbed it out of the center fielder’s hands and got off another off-target toss as Boyer crossed to make it 3-1.”6

After Swoboda’s sacrifice fly brought Boyer home, Simmons got Jerry Grote to hit an inning-ending grounder. But the Mets had given Seaver two insurance runs.

Seaver continued to shut down the Cubs, surrendering eight hits – seven of them singles – while striking out five before he was removed by Westrum with one out in the Cubs’ eighth.

Kessinger opened the eighth with a single. After Glenn Beckert lined out, Seaver told his catcher that he was tired. “Grote came to the bench and told the manager. Wes hustled to the mound and immediately summoned in [Don] Shaw from the pen.” Westrum said after the game, “His legs were weary. That’s longer than he’s pitched all spring. I had contemplated taking him out before he told me he was tired.” 7

Shaw was one of several rookies the Mets took north that spring. He pitched well at every one of his stops in the Mets minor-league system in 1966, finishing with an overall 2.17 ERA and 145 strikeouts. He had a solid spring training in 1967, and the Mets, in need of a left-hander in their bullpen, added him to their roster. When Westrum handed Shaw the ball, it was his fourth relief appearance. Shaw got Williams to ground into an inning-ending double play.

Simmons had been replaced by future Met Cal Koonce in the seventh. Koonce had a perfect frame but struggled to get through the eighth. It started with a leadoff walk to Bosch, followed by Boyer’s single that left runners at the corners. Reynolds’ groundout moved Boyer to second, and Koonce hit Buchek to load the bases.

Sandy Alomar ran for Buchek, who was pulled with an inflamed elbow. Ed Kranepool hit a sacrifice fly that moved all three runners up and added the Mets’ fourth run to their total. Koonce then walked Grote in order to face the weak-hitting Bud Harrelson. But Harrelson managed to land a single that sent two more runners across the plate. Koonce gave up his third walk of the frame to Shaw before striking out Jones. The three runs gave the Mets a 6-1 lead.

Shaw retired the Cubs in order in the ninth to preserve Seaver’s win and earn his first save of the season. “When it was all over on this sunny but slightly windy afternoon, the Mets had reason to thank the orderly process of baseball law which delivered into their custody 22-year-old Tom Seaver,” the Chicago Tribune observed.8 The victory also “gave the Mets back-to-back sweeps of their ‘series’ against Pittsburgh and Chicago – if you can stretch your imagination enough to consider a one-game stand a series.”9

Westrum did not end up using Seaver out of the bullpen or breaking him in gradually. Seaver started 34 games and finished with a 16-13 record and 170 strikeouts on the way to the Rookie of the Year award. Shaw made 40 appearances, earning three saves and striking out 44 batters in 51⅓ innings out of the bullpen.

1 Devine’s numerous moves laid the groundwork for the 1969 Mets championship. He made several significant moves besides the decision to enter the lottery for Seaver. He traded for Jerry Grote, Tommie Agee, and Art Shamsky, who were key players in the Mets championship run. Devine also made sure that the Mets organization stayed focused on player development, which eventually led to pitchers Jerry Koosman and Gary Gentry joining the 1969 starting rotation. He also persuaded Gil Hodges to come from the Senators to manage the team in 1968, which many believe was the final piece of the puzzle to get the Mets to the World Series.

3 Westrum told Joe Donnelly of Newsday on April 19 that he had decided on his starters for the season. Veterans Don Cardwell and Bob Shaw along with rookie pitcher Bill Denehy would anchor the rotation. Westrum was asked about what he thought was going well at the start of the season and said, “So far, it’s been the young pitchers and Cardwell and the hitting of Buchek and Grote and Davis.” Joe Donnelly, “Veep Drops In on Lobby-Sitting Mets,” Newsday (New York), April 19, 1967: A28.

5 Davis arrived in New York through a multiplayer deal. The Mets sent Jim Hickman and Ron Hunt to the Dodgers for Davis and Derrell Griffith.