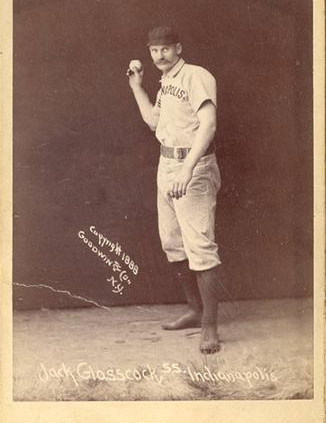 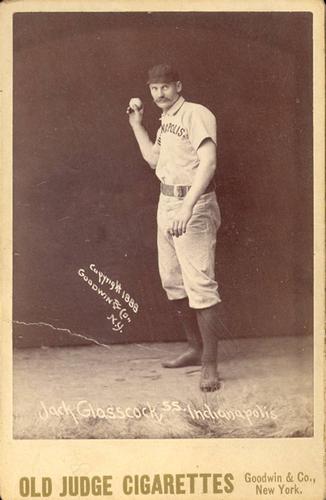 The New York Giants arrived in Indianapolis in August 1889 after winning five straight games – two against the Philadelphia Phillies, followed by a three-game sweep of the Chicago White Stockings. The Indianapolis Hoosiers had won two straight, and eight of their last 10 games, before facing the Giants.1

After the Hoosiers’ 14-4 win in the series opener on August 8, paced by shortstop Jack Glasscock’s five hits and cycle, the Brooklyn Daily Eagle concluded that the New Yorkers, who were in second place in the eight-club National League, trailing only the Boston Beaneaters, were too confident against the sixth-place Hoosiers, and “the result was the worst whipping the Giants have received at the hands of any Western team this season.”2

It must have looked like an intrasquad game to the 1,500 spectators at League Park.3 The Giants lost their baggage en route from Chicago and “played in a combination of old Indianapolis uniforms.”4 Evidently, the uniform trunks had been left in Chicago, so the visitors “had to depend on the Hoosier club for such apparel as was around loose.”5

Only four Giants had matching uniforms, while most had four or five different colors on. Mickey Welch, the Giants’ pitcher, “looked like a trick mule with [an] assortment of hose, white trousers, gray shirt and red belt.”6 The team’s headgear ranged from straw hats to white or black caps.

Giants captain Buck Ewing announced before the game “that their variegated uniforms would bring them luck,”7 but by the time nine innings had passed, the Giants “had been further disfigured”8 by the 10-run beating.

Welch, who had turned 30 years old a month earlier, was in his 10th year in the majors. He had won at least 22 decisions in each season with New York.9 The next season, on July 28, 1890, he won his 300th game, making him only the third pitcher in history to reach that milestone.10

Opposing Welch was Indianapolis’s Henry Boyle. The 28-year-old Boyle had debuted with the Union Association’s St. Louis Maroons in 1884, then remained with the Maroons during their NL tenure of 1885 and 1886, leading the NL with a 1.76 ERA in 1886. When the Maroons disbanded after the 1886 season, Boyle went to the league’s new Indianapolis club.11

Welch “never slackened his speed,”12 but the Indianapolis batters hit him hard. According to the Indianapolis Journal, the Hoosiers “were looking for singles, doubles, triples and home runs, and they found them without much effort.”13 The Giants hit Boyle’s offerings, but the Indy right-hander scattered the hits, seven of which were singles.

In the top of the first, Glasscock, who also served as the Hoosiers’ manager, doubled with one out and, an out later, scored on a single by Paul Hines. Welch walked Marty Sullivan and then Dick Buckley “drove a liner over left field”14 for a home run and a 4-0 lead. A double by Emmett Seery and a single by Glasscock gave the Hoosiers another run in the second.

In the top of the third, Welch retired the first batter, Sullivan, but Buckley lined the ball to the fence for a double. Jack McGeachey’s single drove in Buckley, and McGeachey advanced to second on the throw to the plate. With two down, Boyle helped his own cause with an RBI single, as McGeachey’s run made it 7-0.

Boyle had been perfect through the first two innings, but in the third, singles by Jim O’Rourke and Welch started a rally. Boyle retired Art Whitney and George Gore, but Mike Tiernan’s triple gave New York a pair of runs.

Glasscock led off the fourth for Indianapolis with a triple and scored on a single by Jerry Denny. An inning later, Seery singled with two outs and Glasscock launched a two-run home run over the right-field fence. With four hits in the first five innings, he had already completed the cycle. The home team now led 10-2 after batting in the fifth inning.

In the bottom of the fifth, the Giants were apparently gifted a run by the umpire, Jack McQuaid. O’Rourke singled and stole second base. Boyle retired both Whitney and Welch and had a full count on Gore. On Boyle’s next pitch, Gore “made a vicious lunge at the ball, but missed it.”15

Nevertheless, McQuaid did not call Gore out but awarded him first base with a walk. Tiernan doubled and O’Rourke scored. At this point, Ewing “gave up all hope of winning and retired.”16 William Brown entered the game as the New York catcher. Boyle induced a grounder to shortstop Glasscock, who threw to first baseman Hines for the final out of the inning.

New York added its final tally in the sixth. Singles by Roger Connor, Danny Richardson, and O’Rourke resulted in the Giants’ fourth run.

Welch blanked the Hoosiers from the sixth inning through the eighth, allowing just a double to Boyle. In the ninth, however, the home team “went at Welch again.”17 The first five batters reached. McGeachey’s single, consecutive doubles by Charley Bassett, Boyle, and Seery, and another single by Glasscock (his fifth hit of the game) gave Indianapolis four more runs.

The Giants managed a scratch single by Whitney in the bottom of the ninth, but Boyle stranded him on base, and the game ended with a 14-4 Hoosiers victory. The Indianapolis batters had pounded out 19 hits for 33 total bases.

Glasscock collected five hits, drove in four runs, and scored three times. He had become the first (and only) player in Indianapolis Hoosiers history to hit for the cycle. His rare feat marked the second time in the 1889 season that a batter hit for the cycle, following Louisville’s Pete Browning (June 7, against the Philadelphia Athletics in the American Association).18 Exactly one week after Glasscock, Larry Twitchell of the National League’s Cleveland Spiders hit for the cycle (on August 15 against the Boston Beaneaters).

In addition, he was a pretty good defensive player. His defensive WAR (1.7) led the major leagues in 1889, as he was tops in putouts (246), assists (478), double plays (60), and fielding percentage for a shortstop (.915). In fact, according to his SABR biography, Glasscock was dubbed “King of the Shortstops.”19 On this day, however, his bat made the headlines.

Three years before, Boyle (pitching for the St. Louis Maroons) and Welch faced each other on the mound when another batter hit for the cycle. On May 24, 1886, Maroons second baseman Fred Dunlap accomplished the rare feat. In both games, Boyle’s team had prevailed over Welch and the Giants.

1 Prior to this game, New York had beaten Indianapolis in seven of the 10 games they had played each other. By the end of the 1889 season, the two teams played 20 games against each other, with New York winning 13 of them.

11 After finishing 1886 in sixth place in the NL at 43-79-4, the Maroons withdrew their membership in the National League before the start of the 1887 season. Maroons owner Henry Lucas sold his team to Indianapolis on March 8, 1887, where they became the National League Hoosiers. See Joan M. Thomas, “Henry V. Lucas,” SABR Biography Project, https://sabr.org/bioproj/person/henry-v-lucas/. Accessed September 2022.

18 The was Browning’s second career cycle. He hit for the cycle for the first time on August 8, 1886, exactly three years before Glasscock’s feat.