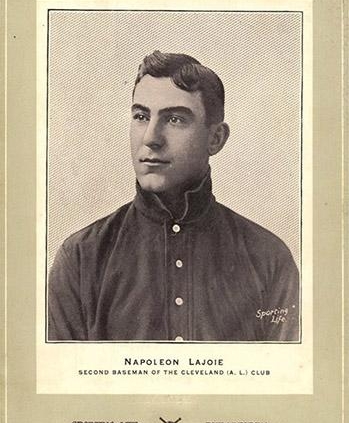 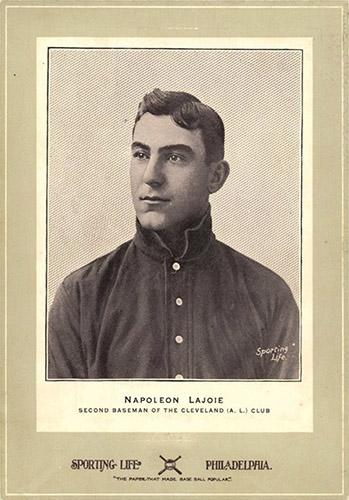 Less than a week before he boiled over on an umpire and caused his team to forfeit a game, Napoleon Lajoie was queried by a Chicago sportswriter about the toils of being among the finest ballplayers in the country.

“Being a headliner in this game is all right, but it has its drawbacks and the principal drawback is the crowd’s opinion of you,” Lajoie told W.A. Phelon Jr. of the Chicago Journal in a story published on August 3, 1903. “Once you get to the front, and have your name in the big type, the stand and bleachers immediately forget that you are just a ballplayer and that only a machine could play perfect ball.”1

Lajoie’s actions five days later during a tight game against the Detroit Tigers proved he was far from perfect, and 6,265 fans were there to formulate an opinion.

The Cleveland Naps trailed 6-5 going into the bottom of the 11th inning as dusk began to settle over League Park on August 8, and a well-used and stained baseball was put into play by umpire Tommy Connolly. Several of Cleveland’s players objected to using the ball, especially considering it had been rolled onto the field by Detroit’s backup catcher Fritz Buelow, but Connolly deemed it acceptable to use. Once Lajoie got his hands on the ball, Cleveland’s captain threw it over the grandstand, quickly resulting in a forfeit victory for Detroit – even though there were two strikes on the batter and two outs in the bottom of the inning.

“When I was brushing off the plate, I noticed a ball laying right near the batter’s box,” Connolly said. “[Detroit catcher Deacon] McGuire picked it up and handed it to me, and when the Clevelands protested it, I looked the ball over and found it up to the requirements. What else was I to do but use it when the time came, for I did not know whether the ball was thrown in by the man who looks after the fouls into the streets or the Detroits. I am not here to do any guess work, but do as I see, and I ordered the ball in play.”

“That was a mean trick Lajoie did on me, but he will have to suffer for it. As I was handing him back the balls that were not used after the game, he kicked me in the shins,” Connolly added. “That was the only rough treatment I received during my way from the park to the office. He shall hear from that.”2

While the game was already headed for a dramatic conclusion after Cleveland had overcome an early five-run deficit, the unexpected drama of the old baseball actually began in the top of the 11th.

Red Donahue, a veteran starter who had been acquired by Cleveland for the stretch run on August 1,3 was still looking for his first victory with the Naps and took his place on the mound against Detroit’s promising young starter George Mullin. Donahue had made his first appearance with Cleveland four days earlier, in the second game of what amounted to a six-game home series against the Tigers.4 Donahue also faced Mullin in that game, ultimately cutting Mullin’s day short when, as a batter, he lined a comebacker off his wrist, but Mullin showed no ill effects from the injury in pitching nine innings against the Naps on August 8.

Donahue had a slow start in his second go-around against the Tigers but settled in and retired 24 of 25 batters from the third inning to the 10th after allowing five runs in the first two frames.5 In the fateful 11th, two singles led to a run and a 6-5 lead that likely would have held up even without the forfeit.

The rally started when Billy Lush walked – the first one Donahue had issued in the game – but Sam Crawford was retired and Lush was forced out on Charlie Carr’s infield grounder. Carr took off to steal second, and Sport McAllister poked a hit through the hole created when Lajoie, Cleveland’s second baseman, broke away from his position to cover the bag. Carr continued to third, and McGuire popped a single that fell between Harry Bay and Jack McCarthy in left-center to bring in the decisive run.

Amid that offensive excursion, Buelow rolled the old, stained ball to the mound. Instead of tossing it out of play then and there, Donahue threw it to Connolly, who kept it in his pocket.

In the bottom of the 11th, Detroit reliever Rube Kisinger, who took over for Mullin in the 10th, retired Bill Bradley and Lajoie. Lajoie had fouled one ball out of play and Charlie Hickman fouled a ball out of the ballpark early in the next at-bat. That was when the stained ball was put into play.

It seemed no one could see the ball clearly – Hickman struck out swinging, but McGuire couldn’t catch the third strike, allowing Hickman to reach first. At that point, Cleveland entered a protest over use of the ball, but Connolly overruled the objection.

McCarthy hoped to muscle the ball out of play when he fouled the second pitch of his at-bat straight back, but the ball did not leave the field. Lajoie called for the ball to be thrown by the Cleveland bench, and he hurled it over the grandstand. That resulted in the forfeit win for the Tigers, on the same day the Cleveland Plain Dealer wrote that the Naps had recently been “playing ball that would disgrace a sandlot aggregation.”6

After Lajoie’s “unfortunate display of childish temper,”7 the crowd surrounded Connolly as he left the field, but no violence or injuries were reported – except Connolly’s claim about Lajoie, who denied the accusation.

“Neither intentionally nor accidentally did I kick Connolly,” Lajoie said, “and if I had, I do not see how I could be punished by [American League President] Ban Johnson, as the game was over when Connolly came up to me.”8

When the game started, it did not look as though extra innings – and additional baseballs – would be necessary. In the top of the first, Lush, Crawford, and Carr hit successive singles with one out. McAllister was hit by a pitch and Joe Yeager reached on the 63rd error of the season by Cleveland shortstop John Gochnaur, which altogether gave Detroit a 4-0 lead. In the second, Heinie Smith singled and moved to second on Mullin’s sacrifice. Jimmy Barrett grounded out to move Smith to third, and Smith scored because Gochnaur’s throw was wild, pushing the lead to 5-0.9

In the bottom of the frame, Cleveland rallied. Hickman singled and McCarthy walked with one out. After a balk was called and Harry Bemis struck out, Gochnaur hit a two-run single to right. Donahue helped his own cause with a single, and Elmer Flick added an RBI single to cut Detroit’s lead to 5-3.

Gochnaur walked, stole second, and scored on Donahue’s single in the fourth, and in the sixth, Flick reached on a two-base error by shortstop McAllister, stole third, and scored on Bradley’s single to knot the score.

With Donahue showing dominance after his early struggles, it was up to the offense to score again to give him his first win with the Naps, and they nearly did so in the eighth. With one out, Flick and Bay hit back-to-back singles and Bradley walked to bring Lajoie to the plate. He smashed one toward right field, but Smith, Detroit’s second baseman, made a jumping catch and doubled off Bradley to end the threat. Hickman, McCarthy, and Bemis were unable to kick off a rally in the bottom of the ninth.

The loss extended the worst stretch of baseball for the Naps since they opened the season at 2-7. They had lost nine of 13 and were in danger of falling below .500 for the first time since May 29 – a tough spot for a team that still had illusions of chasing down the Boston Americans for the American League pennant, despite falling 11 games behind with 48 games remaining. Undeterred by his team’s place in the standings, manager Bill Armour left the club after the forfeit to search for more talent because owners Charles Somers and John Kilfoyl “are determined to give Cleveland a winning team.”10

But perhaps Lajoie’s outburst was all that was needed to kick the team into gear. The Naps routed the Chicago White Stockings 10-2 two days later and followed with 12 wins in their next 13 games to jump into second place in the standings and shave 3½ games off their deficit.11 Included in the stretch were five shutouts, but despite the two weeks of dominance, Cleveland wouldn’t get any closer to the Americans.12

Detroit had been hovering near .500 for most of the season and wound up tied with Cleveland for fourth place after the forfeit, which was the only one in either major league that season but the fourth such game awarded to the Tigers in the first three years of the AL’s existence.13 The Tigers finished fifth at 65-71.

In addition to the sources cited in the Notes, the author consulted the Baseball-Reference.com, Stathead.com, and Retrosheet.org websites for pertinent materials and the box scores noted below. He also used information obtained from game coverage by the Cleveland Plain Dealer and the Detroit Free Press.

3 Donahue came to Cleveland from the St. Louis Browns, who acquired youngster Gene Wright in the deal.

4 The series was originally slated to be a four-game homestand at League Park, but a postponed game from the season-opening series in Detroit was moved to an open date for both teams on August 3, and a game scheduled to be played in Detroit on Sunday, August 9, was also moved to Cleveland to avoid conflicts with laws that prohibited baseball from being played on Sundays in Detroit. Cleveland had a similar law in place, so the game was played on Friday, August 7, in what was originally scheduled as an open date in the four-game series.

5 That eight-inning stretch foreshadowed what was to come from Donahue, who fired shutouts in three of his next four starts.

9 Gochnaur was charged with an American League-record 98 errors during the season.

11 The only loss during the stretch came to Boston on August 18 when Cy Young was pitching.

12 Boston won the pennant by 14½ games over the Philadelphia Athletics, who ended up finishing a half-game ahead of the Naps after taking two of three in a season-ending series.

13 The Tigers were awarded three wins by forfeit in 1901. The first came on May 2, when the Chicago White Stockings tried to stall play in the ninth inning as rain began to fall. Chicago’s hope was to have the game called for rain, which would have wiped out Detroit’s ninth-inning rally that put the Tigers into the lead. On May 31 the Baltimore Orioles roster erupted in a violent protest over a play at the plate on what was ruled a game-tying inside-the-park home run in the bottom of the ninth inning. When the Orioles refused to continue play, the game was awarded to Detroit. On August 21 the Tigers were at Baltimore, and Orioles players and fans became incensed over a call at first base. There had been several questionable calls that went against Baltimore in the preceding days, and players and fans stormed the field in protest, resulting in victory for the Tigers.