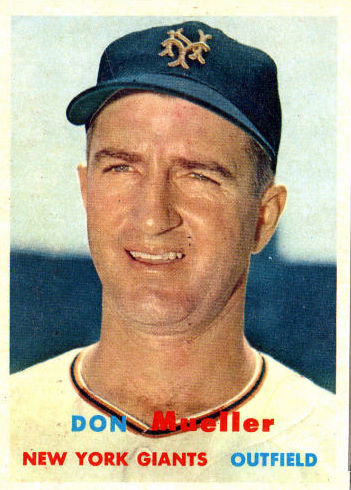 It could have been the first time ever.

From the very first occurrence of a major-league player hitting for the cycle (when Curry Foley used a grand slam to hit for the cycle on May 25, 1882) through the beginning of the 2020 season, there have been just two times when two major leaguers hit for the cycle on the same day.1 However, in both cases, the players played in different games. Yet, on a Sunday afternoon in July 1954, two members of the New York Giants — Don Mueller and Willie Mays — tried to make history by becoming the first pair of teammates to each hit for the cycle in the same game.

On July 11 the Giants and Pirates were slated to play a doubleheader at the Polo Grounds. These would be the last games of the season’s first half, with the All-Star break starting at the completion of the day’s games. A crowd of 21,504 came to the Polo Grounds to root for their Giants. Only a week after Independence Day, the fans were treated to an offensive fireworks display in the first game, as the two teams combined for nine home runs.

Twenty games into the 1954 season, the Giants found themselves in seventh place in the National League. They put together two six-game win streaks and climbed to third place as the month of May ended. Then the Giants played one of the best months in baseball history, winning 24 of 28 games in June (an .857 winning percentage!) to grab first place, and they never looked back. On the other side of the diamond, Pittsburgh had struggled all season. Winning only four of their first 11 games to start the 1954 campaign, the Pirates found themselves in the cellar and stayed there for the rest of the season.

Sal Maglie, a 37-year-old right-hander, made the start for the Giants. He was searching for his ninth win of the season and brought a 3.06 earned-run average into the contest. This was his third appearance against the Pirates in 1954. In his previous two outings, he had allowed only one run in 12 innings pitched. Opposing Maglie was fellow righty Vern Law, who was only 24 years old. The future Cy Young Award winner2 came into this game having lost his last four decisions. His ERA had been steadily rising since May, and it stood at 4.82 entering action on this day.

The Giants wasted no time going “wild at the plate”3 and according to the Pittsburgh Sun-Telegraph, the “early travesty that must go into the records as a baseball contest was not a contest after the third inning,”4 when New York had a nine-run advantage over the Pirates.

The scoring began in the first inning. After Maglie retired the Pirates in order, New York’s Whitey Lockman led off the bottom of the first with a double to left. An out later, Mueller also laced a double into left field, driving in Lockman with the game’s first run.

Maglie allowed two singles in the second, but he kept Pittsburgh off the scoreboard, something Law could not do. Monte Irvin led off the second by crushing Law’s pitch well beyond the fence in left field for his 16th home run. After Law retired Davey Williams, Wes Westrum singled and moved to second on Maglie’s sacrifice. Lockman blasted a home run to deep right, his 13th of the season. Al Dark followed with a bash of his own, sending the ball out of the park beyond the wall in left (number 10 of the season). Mueller grounded out to second baseman Dick Cole to end the inning, but not before the Giants scored four runs on four hits, three of them home runs. In fact, five of the six hits for New York in the first two innings had gone for extra bases.

The Pirates responded in the third. Gair Allie’s one-out single was followed by Bob Skinner’s home run, his sixth of the year. It was also a shot to deep right field. The Giants’ lead was now 5-2.

New York struck right back. Pittsburgh manager Fred Haney had pinch-hit for Law in the top of the third, so Bob Friend entered as a relief pitcher to pitch the bottom of the inning. Friend, normally a starter, had been rocked in his last two starts and was moved to the bullpen. Hank Thompson greeted him with a home run (14) to right. Mays then singled and moved to second on a fielder’s choice. Williams was hit by a pitch and Westrum singled into left field for an RBI. Maglie bunted again, but this time, he was safe, and the bases were loaded with only one out. Lockman’s sacrifice fly to center brought in Williams. Dark lined a single to right, driving in Westrum. Mueller pulled a pitch into the right-field corner for a triple, and two more runners scored. The six runs scored in the inning surely spelled the end for the Pirates. The score was now 11-2, and Haney strode to the mound with a call to the bullpen. Friend had lasted only two-thirds of an inning, and his ERA ballooned to 6.38. (This was his shortest outing of the season.)

Jerry Lynch touched Maglie for a leadoff home run in the fourth inning (his fourth), but that hardly dented the Giants lead. In the home half of the fourth, Mays got the run right back when he hit one “deep into the upper left-center stands”5 for his 31st home run.

Rookie Jake Thies, the third Pittsburgh hurler, and Maglie kept things in check for a few innings, although New York had a mini-rally in the fifth, when Mueller singled and Mays doubled. In the seventh, with Paul LaPalme now on the mound for the visitors, Mueller hit a pitch that “reached the right field patrons and gave him his cycle.”6 In five trips to the plate, he had gotten one of each type of base hit and had driven in four runs.

The blast off LaPalme was Mueller’s first home run of the season. Until this game (his 82nd of the season), he had been “the only New York regular without a home run.”7 The score now stood at 13-3.

Pittsburgh did not give up. In the top of the eighth, Frank Thomas hit a solo homer to deep left (his ninth home run).

Mays led off the bottom of the eighth for New York. In his previous four plate appearances, he had collected a single, double, and home run. His teammate Mueller had already completed the cycle. Facing LaPalme, Mays blasted a ball into center field, but Pittsburgh center fielder Thomas ran it down for an out. How many fans then began speculating that if that ball had fallen into the expansive outfield at the Polo Grounds, could Mays have legged out a triple for his own cycle?

In the final frame, Maglie wilted. Cole led off with a walk. After Vic Janowicz flied out, Sid Gordon pinch-hit for LaPalme and reached on an error by Giants shortstop Dark. Allie hit a groundball single to load the bases, bringing Skinner to the plate. He blasted a Maglie offering into deep center and cleared the bases with a three-run triple. As much as New York skipper Leo Durocher wanted Maglie to get a complete game, he made the move, replacing Maglie with Marv Grissom. Grissom faced two batters, retiring both Preston Ward and Thomas on strikeouts. The Giants won, 13-7.

The Giants’ 18 base hits totaled 41 bases. Ten of the hits went for extra bases. Six different New York batters hit home runs in this game. In the four-game series with the Pirates, the Giants hit 11 homers. Pittsburgh added three round-trippers to the game’s total. The play-by-play accounts (both Retrosheet and Baseball-Reference) point out that all of the round-trippers (seven of them were solo shots) were to “deep left” or “deep right”; there were no cheap shots in this game. Mueller’s 4-for-5 performance caused his batting average to reach .356; Mays was 3-for-5, and his average climbed to .332. The Say Hey Kid had just missed hitting for the cycle.

Mueller’s single, double, triple, and home run meant he was the first player in the majors to hit for the cycle since Larry Doby of the Cleveland Indians accomplished the feat against Boston on June 4, 1952, a span of over two seasons. Three more seasons went by until Mueller’s performance was equaled, when Chicago Cubs left fielder Lee Walls hit for the cycle in a losing cause against the Cincinnati Reds on July 2, 1957, at Wrigley Field.

Mueller’s accomplishment was the 16th time in Giants franchise history that a batter had hit for the cycle. It came 14 years after Harry Danning (June 15, 1940, also against the Pirates). After Mueller, Giants fans had to wait until July 8, 1970, when Jim Ray Hart joined the Cycle Club.

2 Law won the Major League Cy Young Award in 1960, the same season The Sporting News named him “NL Pitcher of the Year.” (From 1956 to 1966, only one award was given in the majors.) In 1967 each league began naming its own winner of the Cy Young Award.