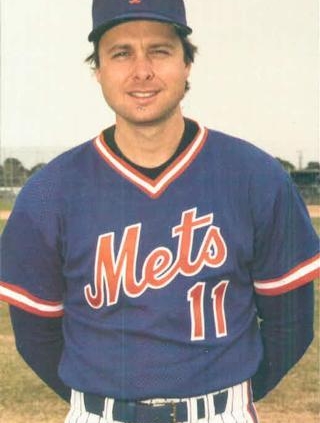 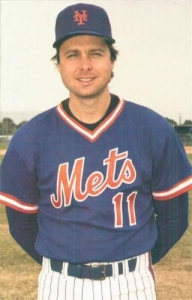 The New York Mets took sole possession of first place in the National League East Division on April 24, 1986, by defeating the St. Louis Cardinals 5-4 in 10 innings, for the sixth win of what turned out to be an 11-game winning streak.1 They built up a six-game lead over the rest of the division by going 18-9 in May. The Mets’ lead was eight games when they took the field against the Phillies on June 10 for the second game of a three-game series at Shea Stadium. Philadelphia arrived in New York 12 games back of the Mets, but their 3-2, 10-inning win in the first game of the series brought them one game away from .500.

Several Mets were struggling at the plate. Keith Hernandez had managed just one hit over the previous four games. Wally Backman was not much better with just three hits in his previous 24 plate appearances. Gary Carter entered the game batting just .230 after going 0-for-5 and leaving six runners on base in the previous day’s loss. Carter acknowledged his struggles, saying, “I’ve been trying to hit 10 homers and knock in 30 runs with one swing. One of these days I’ll learn you can’t do that.”2

Lefthander Bob Ojeda took the mound for the Mets. He entered the game with a 7-2 record and a 2.29 ERA. Five days earlier he had shut out the Pittsburgh Pirates.

Ojeda didn’t look sharp in the first inning despite keeping the Phillies from scoring. After leadoff batter Jeff Stone walked, Juan Samuel hit a one-out single to left. Then Glenn Wilson hit a ball to Kevin Mitchell at short. Mitchell—who had not played shortstop in his two years with Triple-A Tidewater and had been shuffled between the outfield and shortstop just two months into his rookie season—mishandled the ball and instead of a double play, the bases were loaded. Mitchell redeemed himself one batter later when he backpedaled into short left field to grab Von Hayes’s pop fly. Ojeda finally got out of the frame by fanning John Russell.

Ojeda retired the Phillies in order in the second, but they grabbed the lead in the third. Singles by Stone and Ron Roenicke, along with a steal by Stone, put runners at the corners. Stone crossed the plate with the Phillies’ first run when Samuel hit into a force at second. Philadelphia made it 2-0 one inning later on a pair of walks and Samuel’s RBI single.

Charles Hudson started for the Phillies. Hudson, in his fourth season with Philadelphia, had a 4-3 record and was looking to shake off two losing seasons in a row. The right-hander gave up just one hit through the first three innings, a two-out single by Ray Knight in the second.

Darryl Strawberry got the Mets’ second hit, a one-out double in the fourth. This brought up Carter, who had taken extra batting practice with hitting coach Bill Robinson earlier that day. When they were done, Robinson told him, “Leave something for the game, Kid,”3 but Carter ignored him and took several more swings.

The extra work paid off. Carter’s single brought Strawberry home to narrow the Phillies’ lead to one run. Two innings later, Carter struck again, following Strawberry’s leadoff walk by driving Hudson’s second pitch into the left-field bleachers to give the Mets a 3-2 lead.

After the game, Carter, who had had just two hits in the prior six games, said, “Well, someone pointed out that my average was exactly the same exactly a year ago, and I got hot and went on to have a productive season. It was bothering me that I wasn’t hitting. I do take those things personally. But maybe this is the start of something.”4

A pair of Phils singles, followed by Hayes’s sacrifice fly, tied the score in the seventh. Philadelphia jumped ahead again the eighth. Steve Jeltz led off with a walk and moved up a base on Darren Daulton’s sacrifice bunt. With one out, Roenicke hit a liner in the hole on the left side. Jeltz scored when Mookie Wilson’s throw home was late. Right-hander Doug Sisk relieved Ojeda and got Samuel to line out to left field for the final out.

Phillies southpaw Don Carman pitched a flawless seventh. After he got Strawberry to fly out to start the eighth, right-hander Steve Bedrosian came out of the bullpen to face Carter. Carter sent Bedrosian’s slider sailing over the left-field wall for his second homer of the night, tying the game again. “That’s strength against strength,” said Mets manager Davey Johnson. “Fastball pitcher against fastball hitter, and the hitter won.”5

The emotional Carter gave “three high fives to assorted on-deck hitters and batboys. One big fist to the crowd. Nine high fives in the dugout, believed to be two short of his career high. The noise came up again, and Carter jumped out, took off his helmet, and gave it the double striding fist.” Asked about his actions, Carter smiled said, “The fans seem to want it. And now they do it for everyone on the team who hits a homer. But it never happened to me in Montreal. Well, once. When I hit three home runs in a game, and that was in 1977. See, I had a lot of them saved up.”6

Neither team scored in the ninth, and they moved to extra innings in a 4-4 tie. Roger McDowell, the Mets closer, took over in the 10th and got the Phils out in order.

Randy Lerch, who pinch-hit in the top of the frame, stayed in the game as the Phillies’ fifth pitcher. It was his first major-league appearance in more than two years; Lerch, a member of the Phillies from 1975 to 1980, had returned after spending 1985 and the first two months of 1986 in Triple A. The 31-year-old left-hander “had enough adrenaline pumping to move a mountain when he walked out there to start the 10th.” He said later, “Last game I won was against the Mets [on August 25, 1984, while with the San Francisco Giants]. I was pumped up, unbelievably excited.”7  Lerch pitched a one-two-three inning, shutting down the Mets on a pair of fly balls and a groundout.

McDowell shut down the Phils again in the 11th for his second perfect inning of relief. Lerch returned to the mound in the bottom of the inning. The first batter he faced was Knight, who had the second-highest batting average in the league at .333. He hit a bouncer toward third. Just as Rick Schu was about to grab the ball for an easy out, it hit the edge of the grass and took a crazy hop, giving Knight a single instead.

“That was like an AstroTurf bounce,” Lerch said afterward. “It was a weird game. That used to happen to us [the world champion ’80 Phillies] when we were winning all the time. It seems like you get those kind of breaks.”8

Johnson now called for a hit-and-run. Rafael Santana’s groundout to the right side of the infield moved Knight to second. Then Johnson sent right-handed-batting rookie catcher Barry Lyons to bat for McDowell.

Lyons was hitless in eighth at-bats so far in the season, but Phillies manager John Felske told Lerch to intentionally walk him. Felske explained the move later, saying, “It’s a situation where I don’t know that much about him. And they tell me that Lerch was getting left-handers out in [Triple-A] Portland.”9 But lefty Lenny Dykstra foiled Felske’s move by drawing a walk to load the bases.

Johnson now sent right-handed Tim Teufel to hit for Backman, a switch-hitter who hit much better against righties than lefties.10 Teufel had joined the Mets over the winter in a trade from the Twins. Entering the game, he was batting .226 and had yet to get a hit coming off the bench. Teufel had pinch-hit the previous night in the ninth with a chance to win the game but fouled out to the catcher.

Teufel said he was embarrassed to come up short. “I haven’t been coming through the last couple of weeks,” he said. “I had a chance to win the last game and didn’t. This time, I didn’t want to hit it through the middle. I might’ve hit into a double play. I took a very compact swing, not a vicious swing.”11

As Teufel approached the plate, Shea Stadium’s public-address announcer mistakenly identified him as Backman. Asked about whether the crowd would’ve wanted Backman instead, Teufel said afterward, “They would have. Probably.”12

Felske wasted no time in replacing Lerch with right-hander Tom Hume and shifted right fielder Wilson behind second base in hopes of cutting off a groundball up the middle.

Hume got behind in the count 2-and-0. His next pitch was a fastball. Teufel “launched [the ball] over the drawn-in infield, over the two-man drawn-in outfield, over the blue fence.”13 Teufel said in the locker room, “Hume’s a sinkerball pitcher, but he got it up and I hit it on the nose.”14

Teufel rounded the bases and savored the first grand slam of his career. It was also the third pinch-hit grand slam in Mets history. Teufel had grown up in Greenwich, Connecticut, and felt like his trade to the Mets was like a homecoming. As he soaked up the excitement after the game, Teufel said, “This is right up there with the greatest feelings I’ve ever had.”15

Teufel continued to play a big role as one of the Mets reserve players and finished the season with a .247 batting average with 4 homers and 31 RBIs. He played in three World Series games, going 4-for-9, to help the Mets win the championship over Boston.

1 The Mets beat the Pirates 7-1 on April 22 to place them in a tie with St. Louis, which had lost to the Cubs 3-2. Prior to April 22, the Mets were 6-3 and had shuffled up and down the NL East early in the season. They fell to fourth in the division after three straight losses early in April before climbing up the ladder in the division over the next week. Their victory on April 24 placed them solely in first place, where they remained for the remainder of the season.