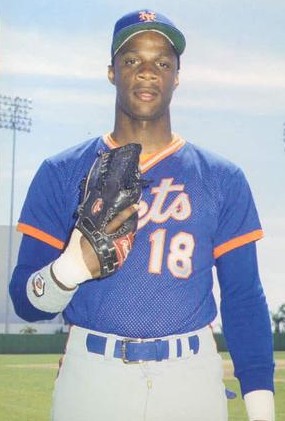 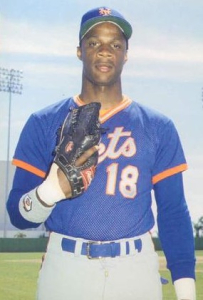 “For me, Friday the 13th was a good day.”—Darryl Strawberry 1

One could forgive the New York Mets and Pittsburgh Pirates for feeling a bit superstitious before opening their four-game set at Shea Stadium on Friday, June 13, 1986. After winning seven of the first eight meetings between the National League East clubs, the first-place Mets sent Dwight Gooden as their talisman against bad luck to the mound with a National League-leading ERA of 2.11. The fourth-place Pirates countered with Rick Reuschel and his 3.08 ERA. This was Gooden and Reuschel’s third matchup of 1986 and, considering the specter of supernatural associated with the date, perhaps the third time was going to be the charm for the Bucs.

The game opened with the reigning NL Cy Young Award winner, Gooden, striking out the eventual all-time home-run king, rookie center fielder Barry Bonds, who was appearing in his 16th major-league game after a May call-up from Triple A.

Both teams saw their number-three hitters reach base through errant defense in the first inning. Johnny Ray, who entered the game with the fourth-highest batting average in the NL (.325), was awarded first via catcher’s interference. Keith Hernandez gained first when left fielder R.J. Reynolds misplayed his sinking liner into an error. Neither team was able to turn these baserunners into runs.

Gooden was uncharacteristically wild in the second. Entering with a season average of 1.75 walks per game, the 21-year-old righty more than doubled that number in this frame alone.

The inning started with a strikeout of Reynolds, who had homered off Gooden on Opening Day in Pittsburgh. Catcher Tony Peña followed by lining a high 3-and-2 fastball down the right-field line. Strawberry fielded the ball on the first bounce and returned it to second baseman Wally Backman to hold Peña to a single. Nine pitches later, the seven and eight hitters, Jim Morrison and Rafael Belliard, were on with walks, loading the bases with one out.

Reuschel squared to bunt on the first pitch of his at-bat. Gooden’s pitch rode up and in, eluding Gary Carter’s mitt and sailing to the backstop. Reuschel spun awkwardly and fell on Carter’s right leg as Carter turned to retrieve the wild pitch. Carter, who had undergone arthroscopic surgery on his right knee during the prior offseason, appeared injured and was unable to get to the ball.2

Gooden hustled back and picked up the ball as Peña scored and the other two runners moved up to second and third. Play stopped as manager Davey Johnson and the Mets’ trainer checked on Carter. Carter remained in the game, and Reuschel struck out on a 2-and-2 fastball for the second out.

Bonds then drew a four-pitch walk. Joe Orsulak fouled off two pitches and worked a 3-and-2 walk, Gooden’s fourth in the inning, to drive in the second Pittsburgh run. Ray’s fly out to Mookie Wilson in center closed out the inning. “Never have I had an inning like that. Not even back in Little League,” Gooden said.3 “… Instead of letting it go, I was aiming the ball.”4

The Mets got one run back in their half of the second. Carter, who had singled, was on third, and Knight on first with one out. Shortstop Rafael Santana hit a high bouncer off the plate, toward shortstop. Belliard fielded it, looked to come home to get Carter, then fired to Sid Bream to retire Santana at first as Carter crossed the plate.

Bream led off the top of the third. He pulled his hands inside and barreled up Gooden’s high inside 3-and-1 fastball over the fence in right-center between the 371- and 396-foot signs, pushing the Pirates’ lead back to two, 3-1.

After the leadoff homer, Gooden struck out the side, finishing Reynolds with a fastball and Peña and Morrison with curveballs.

As in the second, the Mets answered in the bottom half. Mookie Wilson led off by lining a 2-and-0 fastball to the right of the 396-foot sign in right-center for his third home run of the season, cutting the deficit to 3-2.

Backman followed with a drag bunt past Reuschel for a single. One out later, Backman was on third and Strawberry on first for Carter. Reuschel’s first pitch was wide of the plate, and Peña could not backhand it.

Backman scored the tying run; Strawberry turned the bag at second and headed to third as Peña retrieved the ball from the backstop. The throw to third was high, but Morrison leapt, caught it, and tagged a headfirst-sliding Strawberry for the out. Still, the Mets had drawn even, 3-3.

The fourth and fifth were efficient innings for Gooden; he retired all six batters, adding three more strikeouts, and needing only eight pitches in the fourth. Of Gooden’s return to form, first-year Pirates manager Jim Leyland said, “I never saw a guy get on top of his game for four or five innings after struggling and be so awesome.”5

Reuschel matched Gooden in the fourth but ran into trouble in the fifth.

With one out, Backman grounded a single through the box, over Reuschel’s glove. Hernandez hit Reuschel’s 1-and-0 offering to deep center. Bonds made an athletic attempt at the fence to bring the ball back into play. It sailed over his outstretched glove and landed to the left of Shea Stadium’s “Home Run” hat, out of which an illuminated apple adorned with the Mets logo appeared after New York home runs. This two-run shot, Hernandez’s fourth of the season, pushed the Mets in front, 5-3.

Gooden now had a lead for the first time all night. He retired the Pirates in order in the sixth, fanning Peña and Morrison. Belliard’s infield single and Bonds’ second walk of the game gave Pittsburgh two on with one out in the seventh, but Gooden retired Orsulak on a medium fly ball and struck out Ray—his 13th of the game, more than twice his season average of 5.9 coming in—to end the threat.

One more scoreless inning completed Gooden’s night. He worked around an error in the eighth, finishing with 143 pitches.6

Left-hander Larry McWilliams had relieved Reuschel and pitched a clean seventh. The Mets threatened to expand their lead in the eighth, loading the bases against McWilliams and Cecilio Guante. But Guante fanned Santana to keep it a two-run game.

Three outs from victory, Johnson went to the bullpen in the ninth. New York’s primary closer, left-hander Jesse Orosco, had pitched six times in the past seven days. Johnson had a secondary option in righty Roger McDowell, who had converted four of five save opportunities. He gave Orosco the ball and the chance for his 12th save.

Belliard led off with a looping liner to right-center that dropped in front of Len Dykstra—a defensive replacement for George Foster—for a single. Former Met Lee Mazzilli, who had remained in the game in left after pinch-hitting for Reuschel in the seventh, walked.

Bonds was due up, but Leyland went with the platoon advantage and sent up righty-swinging Mike Diaz, a 26-year-old former college football recruit who had hit his first major-league homer off New York’s Sid Fernandez five days earlier in Pittsburgh.7 When Diaz walked, the Pirates had the bases loaded with no outs. Pitcher Bob Kipper ran for Diaz.

Johnson stuck with Orosco against right-hander Bill Almon, another former Met. Almon flied to medium center field; Dykstra made the catch and threw to the cutoff man Santana to keep the runners at first and second while Belliard scored to close the gap to 5-4.

Ray walked to load the bases again. Bream flied to shallow left field. Wilson’s throw to the plate was off-line and Mazzilli scored the tying run. Finally, Orosco struck out Reynolds looking on three pitches to end the inning. But the Pirates—once again taking advantage of a burst of wildness from Mets pitchers—had tied it up and handed Orosco his third blown save of the season.

Left-hander Pat Clements was Pittsburgh’s fourth pitcher in the bottom of the ninth. Mookie Wilson placed a one-out blooper between Ray at second and Reynolds in center for a single. “A Texas Leaguer in New York,” Wilson called it.8

Backman, a switch-hitter batting right against Clements, tapped a ball in front of the plate. Peña fielded it, saw that no one was covering second, and threw out Backman at first for the second out.

With Wilson on second and first base open, Hernandez was intentionally walked. Said Leyland, “That is not a good situation to be in. To me, you have a guy in Hernandez who over the years has been one of—if not the—best clutch hitters in baseball. Walking him made sense.”9

On the 1-and-0 pitch, Strawberry,10 who had been slumping against left-handed pitching,11 hammered a sinking line drive into right field to drive in Wilson for a 6-5 Mets win.12

A friend and I attended this game as high-schoolers. We sat in the right field mezzanine. On the train ride home, neither one of us second-guessed pinch-hitting for Bobby Bonds’ son, who was still a rookie. However, we questioned the logic of awarding the win to a reliever who lost the lead with two earned runs on three walks and one hit in one inning, rather than the starter, who went eight innings with 13 strikeouts.

In addition to the sources cited in the Notes, the author consulted Baseball-Reference.com and Retrosheet.org for pertinent information, including the box score and play-by-play. He also reviewed a recording of the WOR-TV game broadcast on YouTube.

6 During the top of the ninth inning of the WOR-TV broadcast, a graphic was placed on the screen that showed Gooden’s pitch count as 143 (93 strikes and 50 balls). The New York Daily News article by Frank Brown listed Gooden’s pitch total as 142.

7 Of the 42 times Bonds was replaced for a pinch-hitter during his career, only four times was he replaced as a potential tying or go-ahead run (three times during his rookie season of 1986 and once in 1987). Three of the four were against lefties (Bob McClure, Orosco, and Randy Myers—Todd Worrell was the righty). This was the second of those four times.

11 Per the Chicago Tribune, prior to the walk-off hit, Strawberry had been 10-for-70 against left-handers and hadn’t driven in a run against a lefty since April 25.

12 The single in the ninth was the second of Strawberry’s nine career walk-off hits.