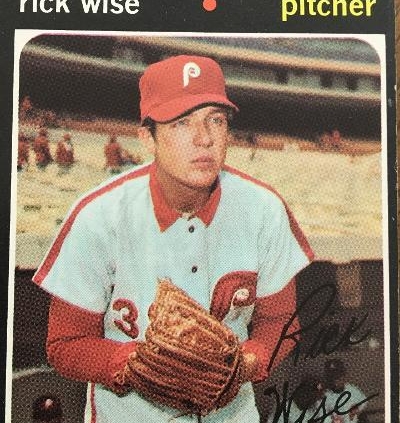 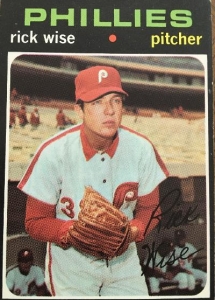 The Cincinnati Reds, defending National League champions, were hosting the Phillies for a four-game series in June 1971. The Big Red Machine was not having a good season. At 32-38 they were in fourth place in the NL West, 14 games behind San Francisco. The visiting Phillies were no better off: At 27-40 they were last in the NL East, 15½ games behind Pittsburgh. Despite the teams’ records, a crowd of 13,329 showed up on a hot1 Tuesday evening and witnessed some history.

The Phillies were holding down the basement in their division, but Rick Wise was not the cause: He had a 7-4 record and a 3.19 ERA. However, he felt terrible that morning, still recovering from a weeklong bout with the flu. But he knew it was his turn in the rotation, so he went to the ballpark and tried to warm up. It was not promising: He felt as if the ball was going only halfway to the plate.2

The Reds sent rookie Ross Grimsley (4-2, 3.51 ERA) to the mound. He had debuted the month before—this was only his ninth game. He started off well, inducing groundouts of Terry Harmon and Larry Bowa before walking Tim McCarver. Deron Johnson grounded to third—the force out at second ended the frame.

Wise started the bottom of the frame with two groundouts: Pete Rose and George Foster. A strikeout of Lee May finished the first.

The Phillies got on the board in the top of the second. Grimsley plunked Joe Lis. Willie Montañez doubled, putting runners on second and third. Lis scored on Roger Freed’s groundout. Grimsley avoided further damage with a pop fly out and Wise hitting into a fielder’s choice.

Wise faced the heart of the Big Red Machine in the bottom of the second. Johnny Bench and Tony Pérez grounded out. Hal McRae flied out to center, with Montañez making a running catch at his knees.3 Wise felt stronger as the game went along. He recalled that the heat from the AstroTurf, which had been building up all day, helped him sweat out the remaining effects of the flu,4 though he did go through three shirts during the game.5

Both pitchers worked clean innings in the third. The closest the Reds came to a hit off Wise was Tommy Helms’ hot grounder down the third-base line. John Vukovich backhanded the ball from his knees and made the throw to first in time for the out.6

Grimsley walked Johnson to open the fourth but erased him on a one-out double play.

The ever-dangerous Rose lined out to start the bottom of the fourth. Montañez again made the defensive play, catching the liner in deep center field.7 Foster was out on a foul pop, and May grounded out to end the fourth with the Reds still hitless.

Freed, the first batter of the Phillies’ fifth, doubled to right. Vukovich’s groundout brought Wise to the plate with one on, one out. His two-run homer off a high slider,8 deep to left, was his third home run of the season. Perhaps Grimsley should have been prepared—Wise had tripled in his previous outing, and homered and doubled in the game before that. Although Wise was batting only .162 entering the game, he was less than two years from hitting .270 in 1969, his career high. That was all for the Phillies, though: Two fly outs ended the frame.

The heart of the Big Red Machine was up again in the bottom of the fifth. Again they walked back to the dugout without reaching base. Wise was well aware of the no-hitter possibility. Some teammates weren’t talking to him, some were talking about it,9 and Phillies manager Frank Lucchesi was pacing in the dugout.10

For Grimsley, the top of the sixth was similar to the top of the fourth. The first batter reached base, the second lined out, and the inning ended quickly on a double play.

Wise finally allowed a baserunner in the bottom of the sixth. After Helms grounded out, making it 16 up, 16 down, Wise walked David Concepción. Wise recalled that it was a good call on ball four—he definitely threw it high.11 After the walk, McCarver12 went out to the mound to suggest that Wise take a few deep breaths, which helped him calm down.13 Concepción was left at first when pinch-hitter Bernie Carbo flied out and Rose grounded right to first. Having sweated through three undershirts in the early-summer heat, Wise gave up on them for the rest of the game.14

Clay Carroll took over the pitching for the Reds in the top of the seventh and made short work of the Phillies: Two groundouts and a strikeout.

Wise opened the bottom of the seventh with a strikeout of Foster. May flied out and Bench grounded to short for another hitless frame. By now, the Cincinnati crowd realized that they had a chance to see history and were cheering for Wise.15 Wise, and at least some of his teammates, were not superstitious and were discussing the no-hitter in the dugout. On the other hand, Lucchesi wouldn’t talk about it, and he sat in the same place for five innings (when he wasn’t pacing).16

Wise was up first in the top of the eighth. His leadoff homer off Carroll put the Phillies up 4-0.17 It was the first two-homer game of Wise’s career.18 McCarver hit a two-out single and Johnson19 walked, but Carroll got Ron Stone20 to line out to leave them on base.

Wise returned to the mound in the bottom of the eighth with the no-hitter possibility in sight. Pérez grounded to third, McRae flied out to center, and Helms grounded to short. Three more outs to go.

Wayne Granger was the final Reds pitcher. All he allowed in the top of the ninth was a two-out single by Vukovich. Wise was the last out, grounding out after fidgeting nervously with his cap, bat, and sleeves in the on-deck circle.21

Now all that stood between Wise and history was Rose (batting .292 as he entered the game), trying to get a hit to avoid his team being no-hit for the second time in three weeks.22 The Cincinnati fans were cheering each strike and booing each ball.23

On a full count,24 Rose hit a solid line drive—right at Vukovich, who was playing a few steps off the third-base line.25 With the ball still in his glove, Vukovich ran to the mound to hug Wise. With that performance, Wise earned a unique spot in the history books. He was the only pitcher to throw a no-hitter and hit two home runs in the game.26 Oh, and he’d done it on 9327 pitches—a Maddux to boot!28

Wise had been close to a no-hitter before—in both senses of the word. Seven years earlier, he was on the bench when Jim Bunning threw his perfect game in the first game of a doubleheader on Father’s Day 1964. Wise pitched the second game of the doubleheader, earning his first major-league win. To hear Wise tell it, this game should have been his second no-hitter. On August 8, 1968, he’d allowed only one hit to the Dodgers, but Wise contended that it should have been scored as an error.29

The Phillies and Reds finished the season in the position they were on that hot day in June: last and fourth in their respective divisions.

After years with a last-place team, Wise finally got to taste the postseason in 1975 with Boston, after being traded there in 1973. He started Game Three and closed Game Six of the 1975 World Series. He earned the win in Game Six when the Red Sox walked off in the bottom of the 12th after he pitched a scoreless top of the frame. Four of the hitters he faced in that inning were Reds he had faced in this no-hitter four years earlier: Bench, Pérez, Foster, and Concepción.

Baseball card is Rick Wise’s 1971 card from the author’s collection.

18 However, it was not the last. He also hit two home runs two months later, in the second game of a doubleheader on August 28, 1971.

19 Johnson might have been a good-luck charm: This was the sixth no-hitter he’d played in. Bill Conlin.

20 Stone replaced Lis in left field in the top of the seventh.

22 Ken Holtzman of the Cubs had no-hit the Reds on June 3. “Players Talked Freely During No-Hit Game.”

26 It’s not “Where have you gone, Joe DiMaggio,” but Rick’s achievement is mentioned in a song by the band The Baseball Project, “Pastime,” from their 2008 debut album (“Two round-trippers and a no-hitter/That’s Rick Wise/Not Bobby Wine”). https://www.youtube.com/watch?v=YZbearvNxRI. Retrieved July 22, 2021.