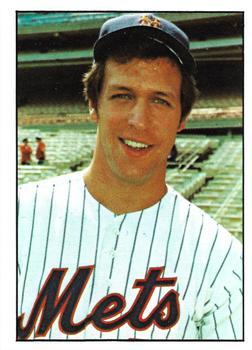 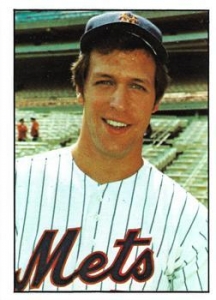 The New York Mets won the 1973 National League pennant only to lose to the Oakland A’s in the World Series. They struggled to stay competitive in 1974, going 29-42 through June 27, and their chances of making the playoffs again were not looking good as the end of June approached. The Mets were in the NL East cellar, 8 games out of first, when the St. Louis Cardinals came to Shea Stadium for a four-game series.

New York’s strength in 1973 had been its starting pitchers. Ace Tom Seaver won 19 games and his second Cy Young Award. Jerry Koosman, George Stone, and Jon Matlack all turned in clutch performances during the season’s final weeks, as the Mets surged with 24 wins in 33 games. They finished with an 82-79 record to rally past the rest of a weak NL East.

But Koosman was the only member of the group pitching well and getting wins in 1974. Seaver had a 4-6 record when he went on the disabled list after his June 21 start. Stone was 2-6 with a 5.28 ERA.

Matlack, New York’s starter on June 29 against the Cardinals, entered the game with a 2.68 ERA, the best on the team, and 77 strikeouts. Unfortunately for the 24-year-old southpaw, “the Mets batters, it seemed, had called a strike whenever he was scheduled to pitch over the past six weeks.”1 Matlack was winless since May 18, when he shut out the Montreal Expos.

The Cardinals had taken over first place in the NL East on June 27 when they beat the Mets in the first game of the series. After the second game was postponed by rain, Matlack took the mound on Saturday afternoon, June 29. In the words of Dick Kaegel of the St. Louis Post-Dispatch, the Cardinals were “poised to start running off with the race for the National League Eastern Division [but] along came Jon Matlack to trip them up out of the starting block.”2

A crowd of 37,317 showed up on the sunny afternoon with the Mets celebrating Old-Timers Day before the game.3 Once the Old-Timers celebration finished, the Mets took the field. Matlack breezed through the first inning. He walked Ted Sizemore but struck out the other three Cardinals he faced.

The Mets jumped on left-hander John Curtis in their half of inning, scoring two runs. Wayne Garrett led off with a single and moved to second on Jerry Grote’s groundout to third. With two outs, Cleon Jones hit his sixth home run of the year to put the Mets in front, 2-0. It was Jones’s 86th career home run, one more than Ed Kranepool’s 85, making him the Mets all-time leader in home runs at the time.

The two runs turned out to be all that Matlack needed. “I think I’m the kind of pitcher where if you give me a run or two in the first three innings, I’m going to be set,” he said afterward.4

Jones was glad to support his teammate, saying, “I went up there with the idea of hitting the ball hard. It was a good pitch. I was lucky to hit it for a homer. It’s a lot easier to play the game for the hitter, too, when you’re ahead.”5

Matlack breezed through the second, facing just three batters. He gave up another walk, the second of three he issued in the game, to Luis Melendez. But Melendez was caught stealing second when he broke too soon and was trapped in a rundown. Ken Reitz lined out for the third out.

After getting Mike Tyson to ground out in the third, the lefty Matlack faced left-handed Curtis, who had two hits in 1973 and was batting .065 so far in 1974. But the pitcher managed to slice the ball into left field for a single. Curtis advanced no further when Lou Brock lined out and Sizemore grounded into a force play.

“Curtis hit a fastball. It was a good pitch too, outside and low. I was very happy with it,” Matlack said afterward. “I never dreamed at that point it would be the only hit of the game.”6

Curtis pitched well through the second, third, and fourth innings, allowing only two hits. A Cardinals defensive error almost cost him a run in the fourth. Ted Martinez hit a line drive into left-center. Center fielder Melendez tried to make a circus catch, and “[w]hen the ball flicked off Melendez’s glove, Martinez continued to second. Then when Brock, moving over from left to back up Melendez, butchered the pickup, [Martinez] reached third.”7 But Curtis retired Ken Boswell and Matlack to strand Martinez.

The Mets gave Matlack an insurance run when Garrett led off the fifth with his seventh home run of the season. It was Garrett’s eighth straight game with a hit, helping him pull out of a midseason slump. The homer raised his batting average to .201 after he started the month hitting just .150.

Garrett said later, “They don’t post the averages on the scoreboard here. In other ballparks they do. It really doesn’t bother me. To look up and see .150 or .175 or .200 doesn’t bother me. That’s what I’ve done in the past. What counts is what I do that time at the plate.”8

Cardinals manager Red Schoendienst pulled Curtis, who had also surrendered two home runs in his previous start, for a pinch-hitter in the sixth. Mike Thompson replaced Curtis. Thompson was in his second season with St. Louis and had struggled all year. He entered the game with a 0-2 record and a 5.81 ERA.

The right-hander made it through the sixth, but the Mets tagged him for a fourth run in the seventh. He walked Garrett to start the frame. Garrett moved to second on a groundout and came home on Jones’s double, giving the Mets a 4-0 lead. Rich Folkers pitched a scoreless eighth after replacing Thompson, who was removed for a pinch-hitter.

Jones, who finished with two hits and three RBIs, said afterward, “A pitcher needs to get ahead once in a while for a breather. Then he can go out and try to hit the corners. Unfortunately, in the past when (Matlack has) been pitching good, we weren’t able to score.”9

Matlack shut down the Cardinals over the final three innings. He finished the game with seven strikeouts and three walks and allowed only three outfield flies.

“Today was one of those days you have once in a great while where everything falls into place,” Matlack said. “You make mistakes and they take them or they swing and miss. The biggest thing to me was the stuff that I had on the ball. I’ve got to put everything together to pitch well. The leg muscles, the back muscles, all have to go towards the plate. When those things are together, my ball explodes at the hitter, it rushes at him the last 10 feet.”10

Cardinals first baseman Joe Torre agreed, saying, “This is the kind of day you have to tip your hat. You knew you’d been had.”11 Matlack’s second one-hitter came against a formidable lineup with three future members of the Baseball Hall of Fame in Brock, Torre, and Ted Simmons. It also had four players who retired with career batting averages of at least .285 (Brock, Simmons, Reggie Smith, and Torre).

The win broke Matlack’s four-game losing streak and raised his record to 6-5 for the season. Despite pitching well down the stretch and finishing with a .241 ERA and 195 strikeouts for the season, he did not get much more run support from the Mets. His final record was 13-15.

The Mets were never able to recover the magic of their 1973 season and finished with a 71-91 record. Manager Yogi Berra remained under a lot of pressure to win throughout the season. When things didn’t improve in 1975, he was replaced by Roy McMillan.

The Cardinals competed for the division title right up to the end of the season, when they eventually fell behind the surging Pittsburgh Pirates and finished in second place, 1½ games back.

Matlack’s victory was the 11th one-hitter in Mets history.12 He had pitched a one-hitter against the Houston Astros on July 10, 1973. Tommy Helms was the player who ruined it for Matlack in that game.

Seaver joked with Matlack after the game, “If they had a DH in this league, you’d have had a no-hitter.”13

3 One of the players there for Old-Timers Day was Jack Hamilton who had pitched the Mets’ second one-hitter, on May 4, 1966.

12 A Mets pitcher didn’t hurl a no-hitter until June 1, 2012, when Johan Santana pitched one against the Cardinals.