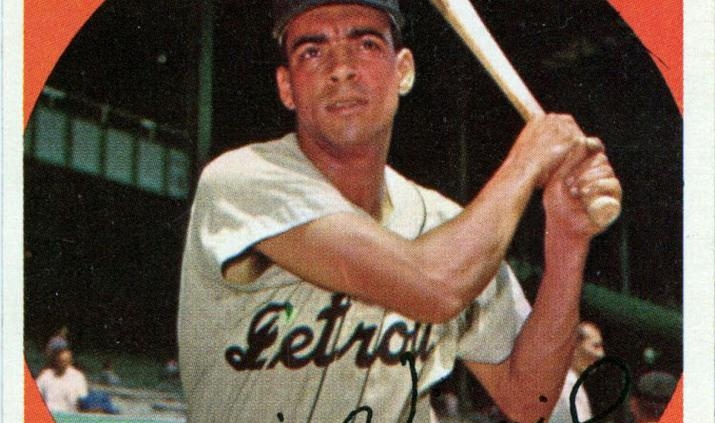 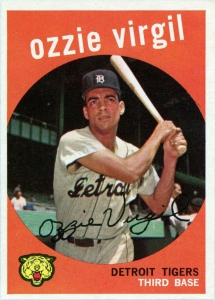 Entering the 1958 season, only two major-league teams – the Detroit Tigers and the Boston Red Sox – had never employed a Black player. Controversy in each city guaranteed that the first player across the line would play under extra attention and pressure.

The Tigers acted first, introducing their first Black player in June.1 The task of breaking Detroit’s color barrier fell to a pioneering utilityman whose long career was marked by intelligence and class, if not by Hall of Fame talent.

Ozzie Virgil was not African American, but rather a native of the Dominican Republic – the first of many Dominicans to reach the major leagues.2 His family resettled in the Bronx in 1947, when he was about 15.

Growing up in the home borough of the Yankees, Virgil became a Brooklyn Dodgers fan instead. To further complicate matters, he signed with New York’s third team, the Giants, in 1953 after a scout spotted him playing sandlot baseball. Virgil played 99 games with the Giants in 1956 and 1957 before a trade in January 1958 sent him to Detroit.3

Virgil began the season with the Triple-A Charleston (West Virginia) Senators of the American Association. Above him, racial tension had been brewing in Detroit for some time, as a Black newspaper, the Michigan Chronicle, regularly criticized the Tigers for failing to sign Black players. When Tigers leadership refused to commit to a timeline for integration, a group known as the Boycott Committee advocated for a picket of Briggs Stadium, though the planned boycott was ultimately canceled.

On June 5, shortly after the threatened picket, the Tigers called up Virgil from Charleston.  Tigers management denied any connection between the community criticism and Virgil’s promotion. Instead, they linked Virgil’s call-up to a slump by third baseman Reno Bertoia, whose average had dropped from .293 on May 9 to .234 on June 5. “We need infield help,” general manager John McHale Sr. said. “On his record, Virgil has earned a chance.”4

Virgil made his Tigers debut in Washington, where the team was beginning the second stop of a four-city road trip.5 Only 6,315 fans came to see two of the American League’s worst teams. Cookie Lavagetto’s Senators sat in sixth place at 21-25 and one tie, 11 games behind the first-place Yankees. Jack Tighe’s Tigers were seventh at 20-25, 11½ games out. The Tigers fired Tighe four days later; he never managed or coached in the majors again.6

Tighe gave the start to struggling lefty Billy Hoeft, in his seventh season with Detroit. Hoeft entered the game with a 3-5 record and a 4.53 ERA and had been bounced from the starting rotation to the bullpen in late May after three straight starts in which he failed to make it through the third inning. He had pitched three shutout innings against the Senators in the first game of a May 25 doubleheader, a performance later ruled a save in baseball’s record books.7

Opposing Hoeft was righty Hal Griggs, in his third season with the Senators. AL batters had lit up Griggs in his previous full season, 1956, when he went 1-6 with a 6.02 ERA in 34 games. In 1958 Griggs had shown some degree of improvement, entering the game with a 2-1 record and a 4.54 ERA. He threw a complete-game win against the Tigers in the second game of a May 7 doubleheader, allowing seven hits, five walks, and four runs in an 11-4 walkover.

The first inning was uneventful, with each team turning a double play. Virgil, hitting sixth, made his first plate appearance in the second, flying to Jim Lemon in right field. The batters on either side of him put the Tigers on the scoreboard. First baseman Gail Harris drew a walk, and center fielder Johnny Groth hit his first homer since 1956 for a 2-0 lead. Washington got two runners on in the bottom half but did not score.

The Tigers piled on in the third, starting with a triple by Hoeft – the third and last three-base hit of his 15-year career. Hoeft scored when Washington shortstop Rocky Bridges misplayed second baseman Frank Bolling’s grounder. After a sacrifice, Tigers left fielder Gus Zernial hit his third homer of the season, making the score 5-0. In the bottom half, Senators pitcher Al Cicotte made the only pinch-hitting appearance of his five-season career. Hitting for Griggs, he fouled out to Virgil. Cicotte was a Tiger by month’s end: Washington traded him to Detroit on June 23 for Vito Valentinetti.

Chuck Stobbs – who led the AL in losses and earned runs8 the previous season – took over for Washington in the fourth. Detroit added a sixth run when Groth and Red Wilson singled and moved ahead a base on the throw in. Hoeft drove in the run with a sacrifice fly. Detroit could have had more, but Wilson was thrown out at home trying to score on a wild pitch.

The game stayed at 6-0 until the top of the seventh, when Wilson doubled and took third on a bunt single by Hoeft. Frank Bolling scored Wilson on a sacrifice fly to left field, and shortstop Billy Martin drove in Hoeft with a double to left. One out later, right fielder Al Kaline made it 9-0 with a triple to right.

The Senators ended Hoeft’s shutout in the bottom half. Left fielder Roy Sievers singled and Lemon scored him with a triple to center field. Bridges’ sacrifice fly to Kaline made the score 9-2. Hoeft retired second baseman Ken Aspromonte and catcher Clint Courtney to stop the rally.

Virgil, who was hitless to that point, started Detroit’s eighth-inning rally. With righty Bud Byerly on the mound, Virgil led off with a ground-rule double that bounced through the bullpen gate. He stayed at second base on Groth’s infield single.9 Wilson’s double to left drove in Virgil. One out later, Frank Bolling’s sacrifice fly scored Groth for an 11-2 lead. Frank’s brother Milt, playing his final major-league season, pinch-hit for Martin and drew a walk but was stranded at first.

The Tigers put two men on in the top of the ninth – including Virgil, who reached on an error – but could not score. In the bottom half, Washington also put two on with a walk and a single. Hoeft got pinch-hitter Bobby Malkmus to foul out to first base, ending the game in 2 hours and 29 minutes. Hoeft gave up four hits and three walks while striking out three to pick up his first win in almost a month. Griggs took the loss.

Bridges, with two hits and an RBI, was the closest thing to an offensive star for Washington. For Detroit, the bottom of the order shone: Groth, Wilson, and Hoeft combined to go 8-for-12 with four RBIs and six runs. Virgil went 1-for-5 with a run scored and had a quiet day afield, smoothly handling two grounders and a foul pop. The game was Tighe’s last win as a major-league manager, as Detroit lost the next three leading up to his firing.

Virgil hit .244 in 49 games, making his home debut on June 17 in another lopsided win over Washington. He also started at third base for Jim Bunning’s no-hitter against Boston on July 20. His debut on June 6 drew special attention in the Detroit Free Press, which ran a photo and a story about him, declaring his play “impressive, but not spectacular.”10

Virgil was not, however, universally welcomed in Detroit’s Black community. “Unfortunately, most of the people in Detroit did not accept me as a Black player. They said I was a Dominican player and they wanted one of their own,” he later said.11 Black outfielder Larry Doby, who integrated both the Cleveland Indians and the AL in 1947, started the 1959 season with Detroit – a season Virgil spent at Triple A.12

Virgil played parts of six more major-league seasons with five teams. Primarily a third baseman, he made appearances at every position but pitcher and center field. His playing career ended with a single at-bat with the 1969 San Francisco Giants, where he served as a coach. It was 13 seasons and a cross-country flight away from where he began in 1956.

Virgil’s baseball-smart reputation led to a 19-season career as a coach with the Giants, Expos, Padres, and Mariners. His son, Ozzie Jr., who was about a year-and-a-half old in June 1958, played parts of 11 seasons in the majors. The Virgils’ paths crossed at the 1985 All-Star Game in Minneapolis: Ozzie Sr. was on the National League coaching staff, while Ozzie Jr. made the NL team as a representative of the Philadelphia Phillies.13

As the man who simultaneously paved the way for baseball’s wave of Dominican legends and for Black Tigers stars like Willie Horton, Lou Whitaker, and Curtis Granderson, Virgil is not as widely recognized as he could be. But those who followed have spoken of him with respect. “Virgil should be for my country as important as [Jackie] Robinson [is] to the African American,” David Ortiz, the Dominican-born Boston Red Sox star, said in 2006.14

1 The Red Sox finally integrated on July 21, 1959, when infielder Pumpsie Green pinch-ran in a game against the Chicago White Sox and stayed in to play shortstop.

3 Virgil and first baseman Gail Harris went to Detroit in exchange for infielder Jim Finigan and $25,000.

4 Watson Spoelstra, “Tigers Obtain First Negro, Call Up Third Sacker Virgil,” The Sporting News, June 11, 1958: 10. According to this story, Virgil was hitting .292 when called up.

6 Hal Middlesworth, “New Pilot Norman Tigers’ Last-Ditch Pitch for Pennant,” The Sporting News, June 18, 1958: 7. Tighe subsequently managed in the Milwaukee Braves’ minor-league system in 1962 and 1963, and in the Tigers’ system from 1967 through 1969. He was named Minor League Manager of the Year by The Sporting News for 1968, when he led the Toledo Mud Hens of the Triple-A International League to an 83-64 finish, and also won International League Manager of the Year honors in 1967 and 1968.

7 The major leagues did not officially recognize the save as a statistic until 1969.

8 Stobbs and Early Wynn of Cleveland tied for the most earned runs given up, with 126. Stobbs led the loss category on his own, with 20.

9 Groth’s single was his 1,000th hit, and the ball was presented to him as a souvenir, according to the Detroit Free Press. He finished his career with 1,064 hits.

12 Doby played only 18 games in Detroit and hit .218 before the Chicago White Sox purchased him in mid-May. A story in the October 22, 1958, issue of The Sporting News tabbed shortstop Maury Wills as a candidate to become the Tigers’ second Black player. While Wills was added to the team’s 40-man roster, however, he never played for the Tigers. Detroit sent him to the Los Angeles Dodgers, where he became a star, in April 1959.

13 The elder Virgil was on the San Diego Padres’ coaching staff at the time. Padres manager Dick Williams managed the NL All-Star team in 1985 by virtue of having won the NL title the season before. He brought along Ozzie Sr. to serve as a coach.