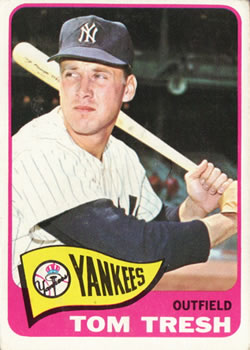 Time and time again over the decades, the New York Yankees and Boston Red Sox have met in high-stakes, high-intensity games with a direct bearing on the American League pennant race.

Their game played on Tuesday night, May 18, 1965, was not one of those epochal battles. Both teams were struggling, showing early signs of the disappointing finishes that awaited at season’s end. Still, the crowd of 12,371 who showed up for the first of a three-game series at Yankee Stadium enjoyed a tight extra-innings matchup, including a memorable Yankee ninth-inning comeback.

Manager Johnny Keane’s eighth-place Yankees were 12-18, 10 games behind the first-place Chicago White Sox. After winning their 29th American League pennant in 44 seasons in 1964, the Yankees were beginning a slide out of contention that lasted into the mid-1970s. As of mid-May, many onlookers were blaming their poor start on early injuries to key players. One observer who saw beyond that easy answer was Bill Veeck, the tell-it-like-it-is former owner of the Browns, Indians, and White Sox. In a syndicated interview, Veeck targeted the Yankees’ failure to develop prospects: “The Yankees aren’t going to win. They weren’t the best team last year and they aren’t this year. … Growing older is no sign of improvement and that’s all the Yankees have done.”1

Manager Billy Herman’s Red Sox stood in seventh place with a 13-15 record, eight games back. The Red Sox and Yankees had met in a four-game series at Fenway Park from May 10-13, with Boston winning three games. The Yankees had also lost three of four to Baltimore from April 30-May 2, and three of four to Washington from May 7-9.

Boston starter Dave Morehead brought a 2-3 record and 5.76 ERA into the game. In his previous start, on May 13, he’d pitched a five-hit complete game to beat New York 4-1. Bill Stafford opposed him for the Yankees, with a 1-1 record and 2.21 ERA in five appearances. On May 10, Stafford had lost a 3-2 complete game against Boston, surrendering an eighth-inning homer to Carl Yastrzemski for the margin of defeat.

Yastrzemski did not appear in Herman’s lineup. Boston’s star left fielder had been on a tear at the plate, hitting for the cycle with two home runs and 5 RBIs against Detroit on May 14. But two days later, he suffered a bruised kidney when he collided with Tigers second baseman Jake Wood.2 “Yaz” did not play again until May 25, with Lenny Green starting in left against the Yankees. Green typically started in center field for Boston; Gary Geiger, who appeared in only 24 games in 1965, took his place there.

The Yankees’ lineup was even more patched-together. Phil Linz spelled Tony Kubek at shortstop. Kubek, hitting .198 in his final big-league season, was suffering from a short-term hand injury.3 Doc Edwards replaced Elston Howard behind the plate as Howard recovered from right elbow surgery that cost him six weeks of playing time.4 Joe Pepitone started in right field in place of Roger Maris, who had been out of action since late April with a hamstring pull in his right leg, while Ray Barker subbed for Pepitone at first base.5 Howard and Maris visited the clubhouse before the game, raising their teammates’ spirits.6

Green proved an adequate substitute for Yastrzemski on the night’s first pitch, which he lined off the right-field foul pole to give Boston an immediate 1-0 lead.7 The home team struck back in the second. After an inning-opening fly out by Pepitone, Morehead walked Barker, third baseman Clete Boyer, and Edwards – the Yankees’ sixth, seventh, and eighth hitters – to load the bases. Stafford belted a 415-foot shot to center field. Geiger ran it down for a “splendid catch,” but Barker tagged up and scored to tie the game, 1-1.8 Morehead issued a fourth walk, to Linz, but got second baseman Bobby Richardson to fly to right to keep the game tied.

Several taut innings followed. From the second inning through the fifth, Stafford surrendered only one single and one walk. After getting out of his second-inning jam, Morehead gave up only one additional walk through the end of the fifth.

Morehead took a walk-scarred no-hitter into the seventh but lost it on singles to Barker and Hector Lopez, pinch-hitting for Edwards. He escaped the inning without yielding a run; in the eighth, he settled down and issued only a walk to left fielder Mickey Mantle.

In the ninth, though, Morehead lost both the shutout and the win. Barker led off with his first major-league home run, into the right-field bleachers. Herman called for ace reliever Dick Radatz, known as “The Monster,” who had never lost to New York.10 One out later, rookie pinch-hitter Horace Clarke and replacement catcher Bob Schmidt hit back-to-back singles. Linz grounded out to second as Clarke advanced to third base. Boston was one out away from a win. But Richardson nicked Radatz with a single to center, scoring Clarke – who eventually replaced him as the Yankees’ starting second baseman – to tie the game, 3-3.

Radatz dominated the 10th and 11th innings, striking out six straight Yankees – one shy of the American League record.11 The Red Sox briefly rallied in the 10th, with back-to-back walks to Jones and Mantilla, and in the 12th, with a single by Radatz and a walk to Jones. Pedro Ramos, who had replaced reliever Hal Reniff after the 10th-inning walks, was equal to the challenge. Boston could not push home a run in either inning.

The New York Times suggested that Radatz “lost something on the way” during his 12th-inning trip on the basepaths.12 He came within one strike of a record-tying seventh straight strikeout, but walked leadoff batter Linz on a 3-and-2 count. Linz stayed at first when Richardson popped up a bunt attempt for the first out. Then Tresh, 0-for-5 to that point in the game, tripled to deep right-center field, just beyond the grasp of Boston’s Tony Conigliaro, to drive in Linz for a 4-3 win.13

Ramos earned his second win of the year with 2⅔ innings of shutout ball. Radatz took the loss in a game that lasted 3 hours and 32 minutes. It was one of 11 losses in 1965 for Radatz, who saw his ERA balloon to 3.91 from 2.29 the previous season.

The Yankees finished the season in sixth place – their lowest position since 1917 – with a 77-85 record, 25 games out of first. Boston was even worse. The Red Sox closed in ninth place in the 10-team AL with a 62-100 record, 40 games out; Morehead’s no-hitter against Cleveland on September 16 was one of the year’s few highlights. Two years later, Boston broke out of its doldrums with the dramatic “Impossible Dream” 1967 American League championship run. Yankees fans endured a 10th-place finish in 1966, then ninth in 1967; they had to wait until 1976 for their team’s next postseason appearance.

Many years ago, the author found a ticket for this game among his late grandfather’s personal effects. (The ticket is pictured.) The author does not recall his grandfather specifically discussing this game but wanted to write about it anyway. 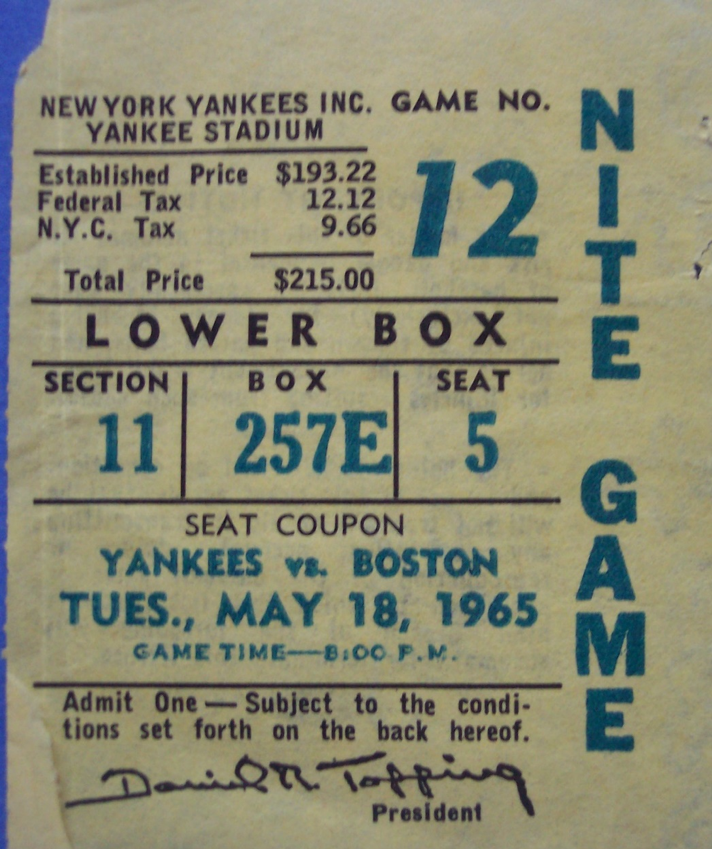 1 Milton Gross (North American Newspaper Alliance), “Veeck Curves,” Tampa (Florida) Times, May 6, 1965: 16A. This interview appeared in several US newspapers in late April and early May.

5 Associated Press, “Yankees Send Maris Home for Two Weeks,” El Paso (Texas) Times, May 1, 1965: 3B. Despite the two-week diagnosis inferred in the headline, Maris did not play again until May 25.

9 Foley. Game narratives on Retrosheet and Baseball-Reference cite Stafford for a “bad pickoff throw” on this play. This story opts for Foley’s description, which mentions both off-target throws by Tresh (to third) and Stafford (to second), with Stafford’s throw leading directly to a Red Sox run and cited as the game’s only error. Birtwell’s story in the Boston Globe mentions a “wild throw” by Stafford but does not characterize it as a pickoff. Still other game accounts – including United Press International, the New York Times, and the Hackensack (New Jersey) Record – do not describe the play at all.

13 Birtwell. The New York Times noted that Tresh’s triple hit the right-field scoreboard on a bounce.