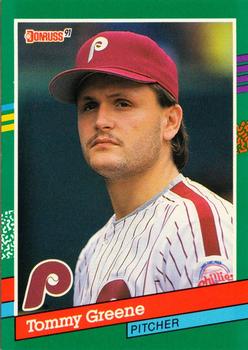 When Tommy Greene graduated from Whiteville High School in June 1985, the North Carolina native was one of the most sought-after young pitchers in the country. As a senior he had a 0.10 ERA with 151 strikeouts in 67 innings.1 For his high-school career, he tossed nine no-hitters. The Atlanta Braves selected Greene in the first round, 14th overall, in the June draft. Control issues and inconsistency, however, slowed Greene’s progress through the Braves’ farm system, and while he spent some time with Atlanta in 1989 and 1990, he never established himself on the major-league staff.

“At times he looked like he was going to be a pretty good pitcher,” Atlanta scout and former Phillies shortstop Bobby Wine said, “but at other times he’d just fall back and be so-so. He just never progressed.”2 On August 9, 1990, he was the player to be named later in a deal that sent Dale Murphy to the Philadelphia Phillies for pitcher Jeff Parrett and others.

In the spring of 1991, Greene was toiling in the Phillies bullpen when starting pitcher Danny Cox pulled a groin muscle and had to miss his scheduled May 23 start against the Montreal Expos. Greene was chosen to replace Cox. It was his second start of the season and only the 15th of his major-league career. Since Greene hadn’t been getting regular work,3 some reporters asked him how long he thought he could go in the game. “I don’t know,” Greene said. “I’ll just go as hard as I can as long as I can. I don’t think they’ll let me throw too many pitches … unless I’m throwing a no-hitter or something.”4

One-hundred and thirty pitches later, before a small crowd of 8,833 at Olympic Stadium, Greene completed the first no-hitter by a visiting pitcher in Montreal’s 22-year major-league baseball history.

Coming into the game, the Phillies and Expos were both hovering around .500 at 19-20 and trailing the division-leading Pittsburgh Pirates by five games. Jim Fregosi was one month into his tenure as manager of the Phillies; his predecessor, Nick Leyva, had been fired on April 22, after the Phillies got off to a 4-9 start. The Greene no-hitter was part of a 1-10 stretch for Montreal, resulting in their manager, Buck Rodgers, being replaced by Tom Runnells.

Not only was this just Greene’s 15th major-league start, but it was also only the 17th start for his batterymate, Darrin Fletcher. Fletcher started this game in place of regular backstop Darren Daulton. The entire Phillies starting lineup for this Thursday afternoon getaway game was a patchwork of regulars and bench players. Journeyman Rod Booker, who was filling in for Charlie Hayes at third base, called it their “F Troop lineup,”5 after a popular television comedy about an inept Old West cavalry. Other subs included John Morris in right field for Dale Murphy and Ricky Jordan starting at first base, moving regular first baseman John Kruk to left field. The Expos fielded their standard lineup, including Marquis Grissom, Andres Galarraga, Larry Walker, Delino DeShields, and Tim Wallach. Veteran Dennis “Oil Can” Boyd was the Expos’ starting pitcher.

The Phillies got Greene a 1-0 lead in the first inning. With two out Kruk grounded a ball between DeShields at second and the second base bag and hustled into second ahead of center fielder Grissom’s throw for a double. After a wild pitch moved Kruk to third, Jordan smashed a Boyd curveball down the third-base line for a triple that scored Kruk.

In the bottom of the first, Greene quickly established what would be his pattern for the game, throwing lots of high fastballs, mixing in an occasional breaking ball, and piling up both strikeouts and walks. After DeShields grounded out, Greene struck out Grissom, walked Ivan Calderon, and after Calderon stole second base, whiffed Galarraga.

Greene struck out Walker looking to start the second, then issued consecutive walks to Wallach and Ron Hassey. He escaped by inducing easy groundballs from Spike Owen and pitcher Boyd.

The score remained 1-0 through the middle innings as Boyd escaped jams in the third and fifth, while Greene retired 11 Expos in order. Catcher Hassey got the closest thing to a hit off Greene when he scorched a line drive right at second baseman Wally Backman. On television, Phillies broadcaster Richie Ashburn threw out a rare compliment to the home-plate umpire, “Jim Quick is doing an excellent job. He has been right on every pitch.”

Greene dug a hole for himself in the sixth by walking the speedy DeShields to lead off the inning. With Grissom at the plate, DeShields stole second base. Grissom then went down swinging for the third time in the game. With Calderon batting, DeShields took off for third but was thrown out by Fletcher. After the game, manager Fregosi said, “That might have been the biggest play [of the game].”6 Greene then walked Calderon but escaped the inning by striking out Galarraga again.

Greene struck out two and walked one in the seventh inning. In the eighth he again walked the leadoff hitter, Eric Bullock, batting for Boyd. After DeShields sacrificed Bullock to second, Greene got fly-ball outs from Grissom and Calderon. Through eight innings, Greene had struck out nine, walked seven, and yielded no hits. His pitch count was well over 100, but Fregosi gave him a chance to finish off his gem.

In the top of the ninth, Rodgers brought in lefty Scott Ruskin to face the Phillies’ left-handed hitters Von Hayes and Fletcher. The Phillies foiled the strategy, scoring a run, as Hayes and Fletcher lined back-to-back doubles to left. Calderon made a diving attempt at Fletcher’s drive, and should have made the catch, but the ball eluded him and rolled to the warning track.

Greene jogged out to the mound for the ninth with a two-run lead and three outs to get. Galarraga led off the inning, and Greene attacked with high fastballs. With the count at 2-and-2, Galarraga swung through a high hard one, losing the grip on his bat in the process. Next up, future Hall of Famer Larry Walker also worked the count to 2-and-2 before bouncing an easy hopper to Booker at third for the second out.

Wallach strode to the plate. Greene stood on the mound, touched the bill of his cap, wiped his brow, looked in for the sign, wiped his brow nervously again, and then wound up to throw his 130th pitch of the game. Wallach hit it hard on one bounce right up the middle. Greene snared it, Wallach threw up his hands in disgust, and then Greene started the celebration, raising his arms over his head in triumph as he ran toward first base and flicked an easy toss to Ricky Jordan for the final out.

Greene followed the ball to first and jumped into Jordan’s arms as his teammates ran to congratulate him. A special hug was reserved for fellow pitcher Terry Mulholland, who had pitched his own no-hitter a season earlier in Philadelphia. The small but appreciative Montreal crowd gave the opposing player a standing ovation for his effort.

Interviewed on the field by Ashburn, Greene drawled, “I never thought I would accomplish something like that. It is just something that never crossed my mind even doing. I had a good fastball. I was high with it, but I was getting by with it.”

The Expos hitters generally agreed with that assessment. Calderon lamented, “He threw me maybe three strikes all game. We chased him all over the place, but we couldn’t make contact.”7 Walker said, “He just blew it by me, basically.”8 But a grumpy Wallach was not about to be so generous: “I’m not talking about the way he threw or anything like that. He already knows he did well. Why should I make him feel any better?”9

In the Phillies locker room, Greene received a call from his wife, six months pregnant and working in Richmond, Virginia, as a real-estate agent. “I about went into labor and I’m not due for another three months yet,” she said.10 Excitement was also high in Greene’s hometown of Whiteville, where his parents still lived.11

Greene’s no-hitter, the eighth in Phillies history, was no thing of beauty. His seven walks equaled the third highest total ever in a no-hit game.12 But beautiful or not, Greene’s feat earned him a regular spot in the Phillies’ rotation for the rest of the year. He responded well, going 13-7 with a 3.38 ERA.

In 1993 Greene was a key member of the staff that helped the Phillies go from worst to first and capture the National League pennant, going 16-4 with a 3.42 ERA and 3.6 bWAR. He was the winning pitcher over the Braves in the deciding game of the National League Championship Series. After that high point, Greene struggled with arm problems, retiring after the 1997 season with a 38-25 record in 119 major-league games.

In addition to the sources cited in the Notes, the author consulted baseballreference.com and retrosheet.com as well as the video transcription of the game on YouTube.com.

3 Greene did, however, have some interesting mound adventures in relief. On April 20 he worked 7⅔ innings behind Jason Grimsley, giving up 6 earned runs in a Phillies 12-1 loss to the Cardinals. On May 17, in a relief appearance that preceded the no-hitter, he pitched the final four innings of a 16-inning shutout as the Phillies defeated the Chicago Cubs, 1-0 on Dickie Thon’s walk-off single.

11 Greene’s mother, Bonnie, said, “I’m so excited; I can hardly think. I got to hurry up and get my hair done, because the local television station is coming over tonight to interview me.” Dwyer.

12 Jim Maloney of the Cincinnati Reds walked 10 in his August 19, 1965, no-hitter against the Chicago Cubs. Nolan Ryan, Dock Ellis, Cliff Chambers, and Johnny Vander Meer walked eight in no-hitters that they pitched. Since Greene’s gem, A.J. Burnett walked nine in his 2001 no-hitter.