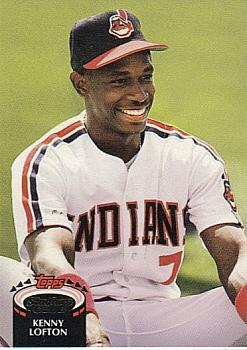 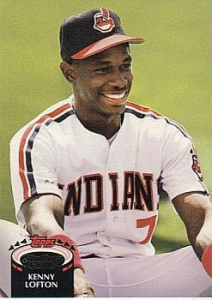 Baseball fans primarily think of Kenny Lofton as a pesky leadoff hitter who terrorized teams on the basepaths. In his first five full major-league seasons, from 1992 to 1997, he led the American League each year in steals, averaging 65 per year. He finished his 17-season career in 2007 with 622 stolen bases, as of 2022 the 15th-most in major-league history and trailing only Vince Coleman among players who debuted in 1980 or later.

But Lofton also had some pop in his bat. He belted 130 career home runs—119 from the leadoff spot—while reaching double figures in seven seasons.

Although he played baseball in high school, Lofton attended the University of Arizona on a basketball scholarship. In four seasons and 128 games with the Wildcats, he averaged 4.8 points per game and was instrumental as their sixth man in 1988 when they reached the NCAA Final Four.1

In his junior year, he played part-time on the Arizona baseball team and was impressive enough to be drafted in the 17th round by the Houston Astros in 1988. Lofton moved quickly through the minors. After hitting .331 with 62 steals for Osceola in the Florida State League in High-A, he was promoted straight to Triple A in Tucson of the Pacific Coast League in 1991. He hit .308 with 17 triples and 40 steals in 130 games and earned a September call-up to the Astros.

Lofton made his major-league debut on September 14, 1991. Leading off at Cincinnati, he walked on four pitches in his first plate appearance. After a groundout in his first official at-bat, he slapped two infield singles before lining a double to left against Rob Dibble. He finished the season hitting .203 in 20 games with that lone extra-base hit.

After the season, Lofton was traded to Cleveland, which had finished 1991 with a .352 winning percentage, second worst in franchise history, and was rebuilding around young talent.2 As the 1992 season opened, Lofton was the Indians’ starting center fielder and leadoff hitter.

He struggled at the plate early on and was dropped to ninth after batting .214 in his first 20 games. As Cleveland entered the finale of a two-game series against the Texas Rangers at Arlington Stadium on May 7, Lofton had just one extra-base hit in 24 games—a double against Jeff Johnson of the New York Yankees on April 19.

With a crowd of 19,573 on hand on a Thursday night, Texas entered at 16-14, in third place in the AL West Division, 1½ games behind the Chicago White Sox.

The Rangers were an AL-best 13-6 on the road but had gone 3-7 during their first homestand of the season. Their current seven-game homestand was off to a bad start; Cleveland was last in the AL East at 11-18, already 9 games behind the first-place Toronto Blue Jays, but had taken the first game of the series, 7-2.

Texas rookie right-hander Roger Pavlik, recalled from Triple-A Oklahoma City on April 28,3 was making his second career start; on May 2 he had allowed six walks against the Chicago White Sox—but just one hit—in six scoreless innings to win his major-league debut.

His opponent was lefty Dennis Cook.4 Cook, who had spent his first four seasons in the National League, was 1-2 with a 4.15 ERA in five starts after coming over from the Los Angeles Dodgers in an offseason trade.5

With one out in the top of the first, Cleveland’s Mark Lewis doubled. Carlos Baerga reached on a single to the shortstop; Lewis scored, and Baerga took second on the throw to the plate. Pavlik walked Albert Belle and Mark Whiten to load the bases, but escaped further damage by striking out Paul Sorrento and getting Brook Jacoby to line out to right.

Brian Downing started the bottom half with an infield single to shortstop and was balked to second. Rafael Palmeiro reached when Baerga dropped an infield pop fly for an error. Cook retired the next two batters, but Monty Fariss singled Downing in, and Dean Palmer doubled Palmeiro home before Dickie Thon grounded to third for the final out. Both runs were unearned, but Texas had a 2-1 lead.

Texas increased its lead to 4-1 in the second. Rangers catcher Iván Rodríguez, an emerging star at age 20, led off with a home run to left. Cook walked the next two, Al Newman and Downing, When Palmeiro flied to deep right, manager Mike Hargrove turned to his bullpen. Reliever Rod Nichols6 gave up a single to 22-year-old slugger Juan González that scored Newman.7

Staked to an early lead, Pavlik continued to struggle with his control. In the third he walked Lewis, who was forced at second on Baerga’s grounder to short. With two outs, Pavlik issued a free pass to Whitten and uncorked a wild pitch to move both runners up. Sorrento lined a two-run single to center to bring the Indians within 4-3.

An inning later, Pavlik allowed singles to Junior Ortiz and Lofton before Lewis smacked a one-out single to score Ortiz and tie the game. Texas manager Bobby Valentine lifted Pavlik for reliever Mike Campbell,8 who closed out the inning with no further damage.

In the fifth with one out, Whiten doubled to right and advanced to third on Sorrento’s grounder to first. Ortiz bounced a single into left to score Whiten and put Cleveland up 5-4.

Lofton stepped in and hammered Campbell’s next pitch to right for a three-run homer, giving Cleveland an 8-4 lead.9

Lofton admitted that the homer was an accident: “I was just up there trying to get a base hit. That was just luck. I was just looking for a pitch I could hit and I got one.”10

The ball was retrieved from the stands and presented to Lofton after the game. “I don’t know what they gave them for it and I don’t care,” he said.11

After allowing González’s RBI single in the second, Nichols retired 11 of 12 batters, allowing just a fourth-inning walk to Downing. But he ran into trouble in the sixth.

Thon led off with a single to left. One out later, Newman reached on an error by shortstop Lewis. Downing followed with a single to score Thon. Cleveland right-hander Mike Christopher12 relieved Nichols and ended the threat by getting Palmeiro to fly to shallow right and striking out Gonzalez.

After Campbell pitched a perfect seventh, Texas rallied. Sierra lined a triple on a full-count pitch and scored on Kevin Reimer’s single to right. Palmer reached on third baseman Jacoby’s error to put two on with no outs. Christopher grabbed Thon’s bunt and forced Reimer at third.

After Rodriguez popped out, Jack Daugherty’s pinch-hit double down the left-field line scored Palmer and make the score 8-7. With the tying run on third, Eric Plunk13 came out of the Indians bullpen and retired Downing on a foul pop to first base.

Palmeiro reached on first baseman Sorrento’s error, Cleveland’s fourth of the game, to start the eighth, but he was stranded at second when Derek Lilliquist struck out Reimer.

After getting the final two outs of the eighth, Kenny Rogers, who led the AL with 81 pitching appearances in 1992,14 allowed a leadoff single in the top of the ninth to Lewis but struck out Baerga and Belle and retired Sorrento on a grounder to keep the Rangers within one.

Palmer started the ninth with a double against Cleveland reliever Steve Olin and went to third on Geno Petralli’s grounder to third. With the infield in, Rodriguez grounded out to third as Palmer held at third. After hitting Jeff Huson, Olin got Downing on a pop to third to preserve the 8-7 win.15

Despite his team’s shoddy defense, Hargrove was pleased, saying, “It’s always nice to win, but that wasn’t pretty. You have to give the Rangers credit for keeping up the pressure and coming back.”16

The Rangers were philosophical about their struggles at home. “Being up 4-1, then losing, that’s not the ideal scenario,” Valentine said. “A lot of times you get hot and cold. We were real hot on the road. We’ll get hot here.”17

“That’s baseball,” added Palmeiro. “These things are going to happen. I guarantee you by the end of the season, we’ll have a better record at home than on the road.”18

At the end of season, Palmeiro’s prediction was unfulfilled—the Rangers finished 41-40 on the road, but just 36-45 at home. They finished fourth in the AL West, 19 games behind the first-place Oakland A’s.

Cleveland’s 76-86 finish was only a game better than the Rangers—but a 19-game improvement over the 1991 Indians. Within three years, Cleveland’s youth movement resulted in a .694 winning percentage in 1995, second-best in franchise history, and the Indians claimed their first pennant since 1954. Lofton’s play was a major factor in Cleveland’s resurgence; in nine seasons from 1992 through 2001, he made six All-Star teams, earned four Glove Gloves, and contributed a .303 batting average.

The author attended this game with his wife one month before their first wedding anniversary. As Lofton rounded the bases, he remembers saying to her, “I think that’s his first career home run.” 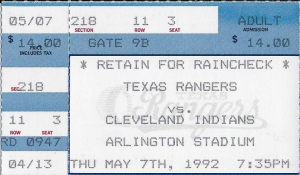 This game was fact-checked by Jim Sweetman and copy-edited by Len Levin.

1 Lofton’s Washington High School in East Chicago has the distinction of producing the only the two men to appear in both the Final Four and the World Series. Tim Stoddard won a National Championship with North Carolina State in 1974 and the World Series with the Baltimore Orioles in 1983.  Rich Bogovich, https://sabr.org/bioproj/person/kenny-lofton/.

2 Lofton was traded along with Dave Rohde for Willie Blair and Ed Taubensee. “We project him as an impact-type player who has a chance to help us in 1992,” said John Hart, the Indians’ director of baseball operations. “We see him as a prototype lead-off hitter/center fielder.” Paul Hoynes, “Indians Get ‘Impact-Type’ Center Fielder,” Cleveland Plain Dealer, December 11, 1991: 1E.

4 Both Pavilk and Cook were from the Houston area and Cook played at the University of Texas.

6 Nichols pitched four innings, allowing one unearned run, and received the win. Entering the game, he was 0-2 against Texas in four career appearances and had allowed 13 earned runs in 11⅓ innings. This was his last appearance against the Rangers.

7 With an 0-2 record and 5.56 ERA, Nichols was on the verge of being sent down. He had eaten lunch earlier in the day at a Chinese restaurant and was sick to his stomach. He threw up in the dugout tunnel after the second inning but his performance in this game kept him in the majors until the end of May. He would start nine games for Triple-A Colorado Springs in the Pacific Coast League before being recalled in late July and finishing the season with the Indians. Paul Hoynes, “Nichols Wins Game, Stays in Majors,” Cleveland Plain Dealer, May 8, 1992: 1D.

8 This was Campbell’s first career relief appearance and his first major-league action since he started for the Seattle Mariners on April 26, 1989. This would be his only game of the 1992 season.

9 Lofton hit just one other homer from the bottom spot in the lineup. It came on July 17, 2004, against Detroit’s Jeremy Bonderman.

12 This was Christopher’s fourth major-league appearance. After three games for the Los Angeles Dodgers, he had been traded along with Cook to Cleveland. Christopher had arrived earlier in the day from Triple-A Colorado Springs.  He would appear in four games in the next 12 days before being sent back down. He was called back up in September and pitched in five more games.

13 This was Plunk’s first game with the Indians. After being released by the Yankees on November 20, 1991, he was signed less than a month later by the Blue Jays, only to be released near the end of spring training on March 27, 1992. He was picked up by Cleveland on April 9.

15 It was his sixth save of the season. He finished with a career-high 29 saves before dying in a tragic boating accident in spring training the following year along with teammate Tim Crews.