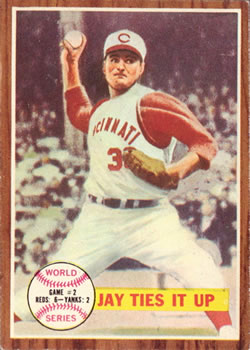 Heading into the 1961 season, the National League pennant race looked to be a five-team battle. Only three teams, the Cubs, Phillies and Reds, appeared to have no chance to challenge for first place.1 However, Cincinnati manager Fred Hutchinson was optimistic about the team’s prospects. “I don’t care about anyone’s pick,” he said on the eve of Opening Day. “We’ve got a club that can go a long way. The young pitchers hold the key to our success. Man for man at the other positions, there’s no club in the league any better than we are.”2

Part of Hutchinson’s optimism was based on the acquisition of right-handed pitcher Joey Jay and third baseman Gene Freese in a three-team trade made at the winter meetings. The Reds sent Roy McMillan, their two-time All-Star shortstop, to the Braves in exchange for Jay and lefty Juan Pizarro, two promising young pitchers. Cincinnati immediately traded Pizarro and veteran pitcher Cal McLish to the Chicago White Sox for Freese. Frank Lane, who as Cleveland’s general manager had traded McLish to the Reds a year earlier, felt the two deals helped Cincinnati. “Jay will solidify the Reds’ pitching staff,” he commented. “Freese is an exciting player. He can run like the devil and he has good power. For the Reds, he should hit from 22 to 25 homers.”3

With a 6-10 record at the end of April, last-place Cincinnati looked like the team that finished 20 games under .500 in 1960. However, the Reds won 26 of 32 games in May, with Jay the winning pitcher in six of the contests. The Reds and Giants ended the month tied for first. The Dodgers were third, one game behind the leaders. By the time Jay registered his 20th win, a 1-0 shutout of the Braves on September 13, Cincinnati had opened up a 5½-game lead over Los Angeles. San Francisco had fallen 9½ games off the lead. The Reds clinched their first pennant in 21 years on September 26, with a 6-3 victory over the Cubs in Chicago.4

In the American League, New York and Detroit were in a close fight for first place during most of the summer, with the Yankees holding a 1½-game lead at the end of August. New York started September with a three-game sweep of the Tigers at Yankee Stadium. That was the beginning of a 13-game winning streak that would stretch the Yankees lead to 11½ games. By the time New York officially clinched the pennant, beating the Orioles 4-2 on September 20, the focus of the press following the team had shifted to whether Roger Maris would break Babe Ruth’s single-season home-run record.5

Frank Robinson had an MVP season for the Reds with 37 homers, 124 RBIs, and a .323 batting average. With Freese and Gordy Coleman each hitting 26 homers, and Vada Pinson batting .343, Cincinnati had a dangerous attack. However, the experts favored the Yankees based on New York’s home-run power, led by Maris and Mickey Mantle. Thirteen of the 18 baseball writers surveyed by The Sporting News picked the Yankees to win the World Series.6 Even though the injured Mantle would miss the first two games, Cincinnati was a 12-5 underdog as the World Series began at Yankee Stadium.7

Jim O’Toole, a 24-year-old lefty who had won five games for the Reds in September to finish the year with 19 wins, started Game One for Cincinnati. O’Toole pitched well, allowing only two runs on solo homers by Elston Howard and Bill Skowron, before being lifted for a pinch-hitter in the eighth inning. However, New York’s Whitey Ford, a 25-game winner who would win the Cy Young Award after the Series, pitched better. Ford scattered two singles and a walk in the 2-0 Yankees win, his third consecutive World Series shutout.

Game Two starters were Jay, who finished the season with 21 wins for Cincinnati, and New York’s 16-game winner Ralph Terry. For three innings the game looked to be a repeat of the previous day’s low-scoring pitchers’ duel. Terry allowed only a two-out single in the second and a two-out walk in the third. Jay, after giving up a leadoff single to Bobby Richardson in the first inning, allowed only a two-out walk in the second.

With one out in the top of the fourth, Robinson reached first when his grounder to the normally sure-handed Clete Boyer bounced off the third baseman’s chest for an error.8 Coleman followed with a home run to deep right-center to put the Reds ahead 2-0. The Yankees tied the score in the bottom of the inning. After a leadoff walk to Maris, Berra homered to deep right field.

Cincinnati manager Hutchinson later said that what occurred in the top of the fifth inning “could have been the key play, the one that turned the ballgame our way.”9 Two-out singles by Elio Chacon and Eddie Kasko put runners at first and third for the Reds. With Pinson at bat, Terry’s slider got away from Howard. Kasko headed for second and Chacon, with the ball only 10 to 15 feet away from the catcher, broke for the plate. “I didn’t see (Chacon) right away,” Howard said after the game. “When Kasko broke I expected to throw to second, but when I caught Chacon out of the corner of my eye he was starting to slide, so I dove on top of him. It was a close decision.”10

New York, trailing by one run, failed to score in the fifth. With one out and Yankees at first and second, Jay struck out Tony Kubek and Maris to end the inning. In the sixth, a two-out double by Wally Post and an intentional walk to Freese brought Cincinnati’s eighth-place batter, rookie catcher Johnny Edwards, to the plate. Edwards, a .186 hitter in the regular season, grounded an 0-and-2 pitch into right field for a single, making the score 4-2, Reds. “I tried to waste a pitch, low and inside,” said Terry, “Instead, it was waist high and over the plate.”11

The Reds added two insurance runs in the eighth. Luis Arroyo, now pitching for New York, walked the first batter he faced, Robinson. Coleman hit a slow roller toward third that Arroyo fielded. His throw went into right field. Robinson scored, but Coleman was thrown out trying to reach third. Post hit a sinking fly to left that Berra misplayed for a three-base error. Freese was again intentionally walked. Edwards doubled, scoring Post and making the score 6-2 in favor of Cincinnati.

With the Yankees down by four runs, Kubek led off the eighth with a single. Maris was the next batter. Jay struck him out for the second time in the game, and the next two batters were retired on a fly out to center and a foul popup to third. The Reds failed to score in the top of the ninth inning, leaving Pinson stranded at second after his one-out double. Jay retired the first two Yankee batters, Howard and Skowron, in the bottom of the ninth, but then issued his sixth walk of the game, to Boyer. Pinch-hitter Billy Gardner lined to shortstop for the final out in Cincinnati’s 6-2 victory.

Jay had pitched well despite walking six, giving up only four hits and striking out six. Asked if he had made any mistakes against the Yankees, he replied, “About a half-dozen, I’d say. But overall, I worked well. My fastball, curve, slider, and sinker went mostly where I wanted them to go.” Jay gave credit to his catcher, Edwards: “Johnny forgot the excitement of being in his first World Series and caught a wonderful game. I shook him off only once.”12

Upon arrival back in Cincinnati, where the Reds would host the next three games, general manager Bill DeWitt declared, “Today we found out the Yankees are not supermen. We proved on the field we are just as good as they are.”13

Maris hit a ninth-inning home run to give New York a 3-2 win in Game Three. The Reds lost Games Four and Five, 7-0 and 13-5. Jay started Game Five, but was removed with two outs in the first inning after giving up two singles, a double and a home run.

Despite Cincinnati’s World Series loss, The Sporting News ranked the rise of the Reds to NL pennant winners as the third most notable event in baseball during 1961, topped only by each league’s expansion to 10 teams and Maris hitting 61 home runs.14

The author accessed Baseball-Reference.com and Retrosheet.org. for box scores/play-by-play information, player, team, and season pages, pitching and batting game logs, and other data.