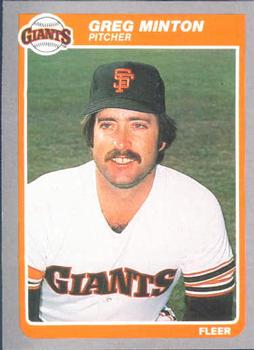 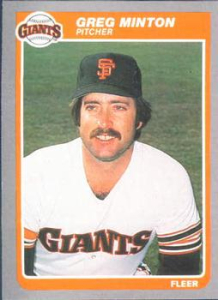 The dreary weather for the San Francisco Giants’ 1985 finale matched the gloom that engulfed the downtrodden franchise.

Some 14,537 fans showed up on a Sunday afternoon – a large crowd by Giants’ standards of the day1 – potentially to witness unwanted history and possibly to see their team play in San Francisco for the last time. Frustrated by his inability to garner support for a new ballpark to replace maligned Candlestick Park, owner Bob Lurie was seriously considering moving the franchise to Oakland-Alameda County Coliseum as cohabitants with the Oakland A’s.2

The 1985 Giants were miserably dreadful. With one game to go, they were trying to avoid becoming the first team in the franchise’s 103-year history to lose 100 games. The Giants had held off that undesirable distinction by winning the first two games of their season-ending series with the Atlanta Braves; they entered October 6 with a 62-99 record.

“It will show what we’re made of to go out tomorrow and bust our butts and not be a team that lost 100 games,” said Vida Blue on October 5 after pitching the Giants’ second straight complete-game victory over the Braves. “I know I don’t want to be remembered as a member of the 1985 Giants club that lost 100 games. I don’t want that kind of record at all by my name.”3

San Francisco battled but could not pull off three victories in a row, falling 8-7 on a gray and misty day.

Giants rookie left-hander Colin Ward, making the second start of his career (on three days’ rest),4 matched up against Braves righty Steve Bedrosian, a former and future relief ace who spent the entire season in the starting rotation and entered with a 7-15 record.5

Atlanta, faring only a few games better than the Giants at 65-96, scored a run in the first inning, four in the second, and one in the fourth for a seemingly commanding 6-0 lead. Andres Thomas and Albert Hall both had two-run singles in the second. Ward was knocked out after 1⅔ innings, charged with five runs, all earned. Frank Williams (1⅓ scoreless innings), Bobby Moore (one run in two-thirds of an inning), and Jeff Robinson (2⅓ scoreless) followed him to the mound.6

Staked to a six-run advantage, Bedrosian cruised through five innings, allowing only a second-inning triple by Rob Deer while striking out five. But he walked the first four batters of the sixth, including Mike Woodard with the bases loaded to make it 6-1.

Braves interim manager Bobby Wine7 summoned Jeff Dedmon from the bullpen, but San Francisco’s rally marched on as Jeff Leonard greeted Dedmon with a two-run single and Woodard scored on a wild pitch.

With the lead down to 6-4, Dedmon seemed to settle the situation down by retiring Dan Driessen and Deer, then getting ahead 1-and-2 on backup catcher Alex Treviño, who played for the Braves in 1984 before being traded to the Giants in April 1985. But Dedmon hung a breaking ball, and the 165-pound Treviño swung hard, finishing his follow-through with his back knee almost touching the ground.

The ball carried over Candlestick’s see-through fence in left field, into a crowd of spectators who had hopped down from their seats, and it finally landed in a fan’s glove. Treviño’s three-run homer, his sixth of the season, capped the uprising and put the Giants in front, 7-6. Treviño obliged a curtain call from the suddenly frenzied crowd. Thanks to five walks, San Francisco had scored its seven runs on just two hits.

In the seventh, the Giants turned the game over to closer Scott Garrelts, their lone All-Star in 1985 and the team leader with 13 saves. But Atlanta tied the game on a one-out, pinch-hit single by Chris Chambliss, and Mark Davis allowed an ensuing pinch-hit RBI single by Claudell Washington that put the Braves back on top, 8-7.

Gene Garber pitched the final three innings to earn his first save of the season.8 The sidewinder allowed one hit while striking out two batters – David Green and Ron Roenicke – for the final outs of the game.

Home-plate umpire Randy Marsh rang up Roenicke on a called strike three that was “a fastball about a foot outside and six inches off the ground,” according to Roenicke, who had walked four times in four plate appearances a day earlier. “It wasn’t a strike. … It’s a situation where everyone wants to get out of there. … Obviously you don’t want to make the last out. But somebody’s got to do it.”9

Garrelts ended an otherwise strong season with losses in his final two appearances. On being charged with the loss in the Giants’ historic defeat, he said, “It’s something I can live with.”10

The Giants had won their season opener, 4-3 over the San Diego Padres, but their last winning record in 1985 was 3-2. Sinking into last place in the National League West Division on April 18, San Francisco wallowed there for all but five days the balance of the season. It was the second straight year the Giants finished in the cellar. (They went 66-96 in 1984.11)

With their final record of 62-100, the Giants finished 33 games behind the division-winning Los Angeles Dodgers, beating out only the Cleveland Indians (60-102) and Pittsburgh Pirates (57-104) for the worst record in the majors. The Giants’ .383 winning percentage ranked fourth worst in franchise history as of the 2022 season.12

Hitting was a season-long issue. San Francisco, which had traded slugger Jack Clark to the eventual NL champion St. Louis Cardinals in February 1985 and experienced significant drops in production by several veterans, finished last in the majors with a .233 batting average and 556 runs scored (3.4 per game).13 The Giants were sixth in the NL with a 3.61 ERA and second with 985 strikeouts, behind the New York Mets’ 1,039.

“Even when you’re winning in ’82 (87-75 record) and you come to the ballpark and it’s semi-snowing here, you have to mentally make yourself get up for the game,” said relief pitcher Greg Minton, a Giant since 1975 who pitched the ninth inning of the finale.14

Catcher Bob Brenly, who finished his fifth season in San Francisco, admitted, “I’m really looking forward to going somewhere where the weather won’t be the topic of conversation every night after the game.

“If it was the last ballgame, I guess it’s appropriate that it was misting and gray and cold and miserable because that’s the way it was 95 percent of the time. I guess we went out on the same note we came in on.”15

Speculation about the Giants’ future continued until January 1986, when Lurie announced that the team was returning to Candlestick.16

Meanwhile, there were foundations of better days for the Giants on the field. In September 1985 Lurie had fired longtime general manager Tom Haller and first-year manager Jim Davenport, both former popular players with the Giants, and hired Al Rosen as president and general manager, who in turn hired Roger Craig as manager. Lurie gave the duo “a mandate for change.”17

Under Craig, the Giants went 6-12. “I saw things I didn’t want to see,” he said.18 In a letter distributed to fans during a series against the Dodgers in September, Rosen said of Craig: “Roger is a winner. He’s also a motivator and will immediately address the attitude problem which is so obvious with the Giants.”19

In further assessing the team, Rosen said: “There is a certain chemistry that you have to have. I don’t think the present players have that chemistry.”20

Rosen didn’t overhaul the roster during the offseason, but he did acquire two players who made considerable contributions, outfielder Candy Maldonado and pitcher Juan Berenguer.21 More significantly, the Giants reached into their farm system and promoted a pair of future stars in first baseman Will Clark and second baseman Robby Thompson.

With Craig, the Giants experienced an attitude adjustment. From the first day of spring training in Scottsdale, Arizona, he sold the players on his positivity, which included such catchy phrases as “Humm Baby” and “Don’t get your dauber down.” He also stressed making Candlestick Park a home-field advantage. New team policies were implemented, including a more stringent dress code, a ban on loud music in the clubhouse, and an obligation to stand at attention on the top step of the dugout during the national anthem. “They need new direction,” Craig said. “We’ve got a program now, and if they don’t like it, they can go somewhere else.”22

The Giants had just six new players on Opening Day 1986, but the refreshing mindset permeated the roster, including veterans like Brenly, outfielders Leonard and Chili Davis, and pitcher Mike Krukow.

As late as July 20, the Giants were in first place in the NL West, and they ended up third with an 83-79 record, 13 games behind the Houston Astros. Their 21-game improvement from 1985 made them just the ninth team in major-league history to follow a 100-loss campaign with a winning season.

In addition to the sources cited in the Notes, the author consulted the Baseball-Reference.com and Retrosheet.org websites for pertinent material and the box scores noted below. He also reviewed a recording of the WTBS-TV broadcast posted on YouTube.

4 Ward had made his first career start four days earlier against Houston, working six innings and allowing just one run and three hits with two walks and five strikeouts. He was traded to the Cincinnati Reds on November 11, 1985, for pitcher Bob Buchanan, but the trade was voided on January 30, 1986. Ward subsequently was traded to the San Diego Padres on April 25, 1987, along with infielder Steve Miller, for infielder Mark Wasinger and pitcher Tom Meagher. Ward never pitched in the majors again after his start in the 1985 season finale.

6 Moore, like Ward, was a Giants call-up from Triple A when rosters expanded in September 1985. And as with Ward, this was Moore’s final major-league game.

16 Lurie wound up being rebuffed by the Oakland-Alameda County Coliseum board of directors, then explored Denver as a temporary home until a new ballpark would be built in San Francisco. Lurie never got the new ballpark. He sold the Giants in 1993 to a group of local investors headed by Peter Magowan, who began building a privately financed ballpark in 1997. Pacific Bell Park opened in 2000, and as of 2022 it was known as Oracle Park and was regarded as one of the major leagues’ finest ballparks.