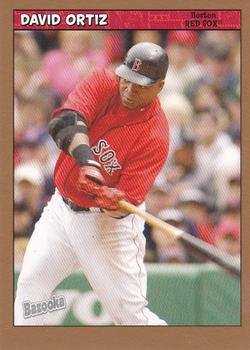 With his 51st home run of 2006, hit off Johan Santana of the Minnesota Twins in the first inning on September 21 at Fenway Park, David Ortiz set a new Boston Red Sox record for the most home runs in one season, passing Jimmie Foxx, who hit 50 home runs in 1938.1

Foxx’s franchise record had stood for 67 years. The new mark of 51 lasted just six innings – Ortiz added his 52nd homer in the seventh inning, leading the Red Sox to a 6-0 win over the Twins.

A series of Hall of Fame-bound Red Sox power hitters had chased after Foxx’s mark over the years, each getting a little closer than the last. Ted Williams, who debuted the season after Foxx’s big year, played four seasons alongside Foxx and finished his career just 13 homers shy of Foxx’s total of 534, was the first challenger. Williams’s best was 43 home runs, hit in his American League MVP campaign of 1949.

Carl Yastrzemski reached the majors in 1961, the season after Williams retired, taking his place in left field. In 1967, Yastrzemski hit 44 home runs while winning the Triple Crown, earning MVP honors, and leading the Red Sox to their “Impossible Dream” pennant. In 1978, with Yastrzemski batting cleanup, another Boston left fielder, Jim Rice, hit 46 homers from the third spot in the order, on the way to an MVP season of his own.

Several generations of sluggers took aim at Fenway’s fences from Rice’s retirement in 1989 through Ortiz’s arrival in 2003, with Mo Vaughn’s 44 homers in 1996 the closest to Foxx’s record.

Released by the Twins after the 2002 season, Ortiz signed with the Red Sox and as the DH, hit 31 homers in his first year in Boston.2 A 41-homer season followed in 2004, and Ortiz helped see the Red Sox all the way to their first World Series win in 86 years, notably driving in the game-winning runs in the crucial Games Four and Five of the American League Championship Series against the New York Yankees.

In 2005 Ortiz outdid Williams, Yastrzemski, Rice, and every other Red Sox batter since Foxx by hitting 47 home runs, while leading the major leagues with 148 RBIs and finishing second in the American League MVP voting. (Teammate Manny Ramirez added 45 homers in 2005, coming closer to Foxx than anyone but Ortiz and Rice. Ramirez and Ortiz combined for 92 homers in 2005.)

Ortiz, now 30 years old, homered in the season’s first game in 2006. After five homerless games, he homered three games in succession, ending the month of April with 10. His pace slowed with five in May, then eight in June. In the first week of July, though, he hit seven homers and added another seven before month’s end for a total of 37 so far in the season.

Ten more homers followed in August. When Ortiz hit his 47th home run of the season on August 27, he had thus already matched his 2005 total – the second-most of any Red Sox player and only three behind “The Beast,” Jimmie Foxx.

After the August 27 game, he didn’t play again until September 5, due to what was described as an irregular heartbeat that needed to be assessed. He checked himself into Massachusetts General Hospital and was discharged the next morning. He missed eight games in all.

In his fifth game back, on September 10, Ortiz hit home run number 48. It took another week for number 49, in the first game of two at Yankee Stadium on September 17. With 12 games left on the schedule, it appeared only a matter of time before “Big Papi” would hit number 50 and then add on.

The Twins, the team that released Ortiz back in 2002, came to Fenway Park on September 19. He went 0-for-5 that night, in part due to the flu. He said he hadn’t been pressing, going for the mark. “I swung at strikes,” Ortiz said. “I chased [only] one pitch that was a ball.”3 He did add, “I’m just playing my game. When you’re thinking about hitting a home run, it’s time to walk away from the game.”4

He hit number 50 on September 20, a solo home run to right-center off Boof Bonser in the sixth inning, giving Boston a 2-1 lead.5 The lead didn’t hold, however, with the Twins scoring four unanswered runs in the eighth and three more in the ninth. It wasn’t the kind of game any Red Sox fan was going to celebrate. But fans did celebrate David Ortiz, as did his teammates. There was a curtain call and the song “Simply the Best” was played over the Fenway Park sound system.6

On Thursday night, September 21, Josh Beckett took the mound for Terry Francona’s Red Sox. He was 15-10. Twins manager Ron Gardenhire countered with ace Santana, who was 18-5 and on his way to his second Cy Young Award-winning season and a major-league-leading 19 victories.

Both teams were in second place in their respective divisions. The 90-61 Twins were only a half-game behind the Detroit Tigers in the AL Central. The 81-71 Red Sox were a full 11 games behind the New York Yankees.

Joe Mauer, headed for his first of three career batting titles, doubled with two outs in the top of the first but was the only baserunner for Minnesota.

Second baseman Dustin Pedroia, who had made his major-league debut a month earlier, led off for the Red Sox and flied out to center field. First baseman Mark Loretta grounded out to his counterpart at first base, Justin Morneau, unassisted.

That brought up the DH, David Ortiz. He didn’t wait a moment. He jumped on Santana’s first pitch and hammered it “just over the fence at the far left-hand side of the Sox bullpen.”7

Ortiz said of Santana, whom he had known since both of them came up with the Twins, “Johan has the best stuff in the league. You might get one pitch to hit and then everything you see afterwards is nasty. So I was very prepared walking from the on-deck (circle) to the plate and that was the pitch I was going to see and I tried not to miss it.”8

Writing about Ortiz in the next morning’s Boston Globe, Gordon Edes asked, “Do mythical creatures exist?”9

Ortiz walked in the second inning and singled to left in the fourth. The Red Sox built a 4-0 lead through 6½ innings. After five, Matt Guerrier had come in to relieve Santana.

With one out in the bottom of the seventh, on the ninth pitch of the at-bat (with the count 2-and-2), Ortiz hit his second homer of the night into the center-field bleachers.10

It was his sixth multihomer game of 2006. It was number 52 of the season. This time the Red Sox gave him the cold shoulder, pretending to ignore him as he returned to the dugout until another round of hugs and backslapping broke out.

It had apparently been quite a blast. Patrick Reusse of the Minneapolis Star-Tribune said it “almost resulted in multiple fatalities in the center field bleachers.”

Homer 51 had been caught by 29-year-old Joel McGrath of Waltham, Massachusetts, number 52 by 10-year-old Tommy Valerini of Boxford, Massachusetts. They were both greeted after the game by Ortiz, who posed with them and exchange some items for the two baseballs.11

After things settled down, third baseman Mike Lowell stepped into the batter’s box and hit the next pitch Guerrier threw for another home run, giving the Red Sox their sixth and final run of the game. Beckett had thrown eight scoreless innings, with six hits. Keith Foulke completed the shutout with a scoreless ninth inning.

Ortiz did not stop after setting the record. On September 24, in Toronto against Gustavo Chacin, Ortiz hit homer number 53 in the first inning. It was his 32nd home run of the season hit on the road, tying the American League record Babe Ruth had set in 1927.12

The Red Sox finished third in the AL East, but the Twins won in the Central. Boston was swept in the ALDS by the Oakland A’s. The Tigers beat Oakland, then lost to the St. Louis Cardinals in the World Series.

Ortiz not only led the league in homers and RBIs, but with 119 walks and 355 total bases. He finished third in the MVP voting. Justin Morneau won the award.

In addition to the sources cited in the Notes, the author relied on Baseball-Reference.com and Retrosheet.org. Thanks to Stew Thornley.

1 Foxx led the major leagues in RBIs in 1938 with 175. The home-run leader was Hank Greenberg, who hit 58 home runs for the Detroit Tigers.

2 Twins GM Terry Ryan was forthright regarding who had been responsible for giving Ortiz his release in December 2002. “Plain and simple, it was a bad decision. I just made a bad decision. It was me. Nobody else is to blame. If I knew he was going to be first, second, or third in the MVP voting the last three years, I certainly wouldn’t have released him.” Nick Cafardo, “Twins Get Better of This Deal,” Boston Globe, September 20, 2006: F1, F5.

3 Cafardo, “Twins Get Better of This Deal.”

11 Prior to hitting number 50, Ortiz had posed for photographs with fans who donated $100 to the Alisha Fund at Boston Children’s Hospital to help raise funds for a young girl’s care. He offered the ball hit for number 50 to be auctioned off on the Red Sox website for charity. Mike Fine, “Big Night for Big Papi,” Quincy Patriot Ledger, September 22, 2006: 19, 24. Whatever money was raised was to be shared between the Boys and Girls Clubs of America and the Plaza de Salud Hospital de Niños in Santo Domingo. See Joe Christensen, “Gardy Likes Punto at This Next Year, Too,” Minneapolis Star Tribune, September 22, 2006: C9.