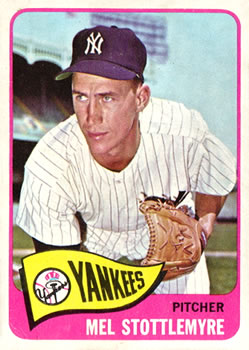 With the designated hitter in place in both leagues starting in the 2022 season, no pitcher will be able to match what Mel Stottlemyre did in 1964. As the New York Yankees won their 11th game in a row and closed in on a fifth straight pennant, their rookie sensation had five hits in five at-bats against the Washington Senators on September 26.

In addition to his batting heroics, which included driving in two runs and scoring another in New York’s decisive six-run second inning, Stottlemyre also tossed a two-hit shutout. A month earlier, the Senators had beaten Stottlemyre, 2-0, for his first loss after he opened his major-league career with three straight wins. The win in the rematch gave him five victories in a row and a 9-2 record.

This sunny afternoon, before a paid crowd of 7,642, the 22-year-old Yankee matched up against ninth-place Washington’s top pitcher, 14-game winner Claude Osteen.

Osteen yielded back-to-back singles to Phil Linz and Bobby Richardson to open the game, but a popout by Roger Maris and a double-play grounder by Mickey Mantle ended the threat.1

Stottlemyre allowed a one-out single to Don Zimmer in the bottom of the first but started a double play on Chuck Hinton’s grounder back to the mound to get out of trouble.

The top of the second doomed Osteen and Washington. Elston Howard led off with a walk. Tom Tresh singled him to second. Osteen hit Joe Pepitone with a pitch to load the bases.

Against reliever Dave Stenhouse, the Yankees weren’t done. Linz lined out to second, but Richardson singled to left and Maris walked, loading the bases. When Stenhouse got Mantle to pop out to short, it looked as though the Senators might get out of the inning.

But Howard and Tresh walked, bringing in two more runs and bringing in the Senators’ third pitcher, Steve Ridzik. Pepitone looked at strike three for the third out, but New York had scored six times.

The Yankees’ long time at bat had little effect on Stottlemyre. He got two quick outs in the bottom of the inning before veteran Joe Cunningham doubled to center for Washington’s second hit of the game, which turned out to be its last. A groundout ended the inning.

With one out in the third, Stottlemyre singled to center, but was stranded. The Senators pinch-hit for Ridzik in the bottom of the inning, bringing in Jim Bronstad for the fourth.

In the fifth, after Boyer singled, Stottlemyre bunted and beat it out for his third hit. A double-play grounder by Richardson got the Senators out of the inning.

Stottlemyre walked the first two batters, Don Lock and Cunningham, in the fifth, but immediately induced a 4-6-3 double play. Lock was left at third base when a grounder to short ended the inning.

Bronstad held New York scoreless through the sixth, but against reliever Alan Koch, the Nats’ fifth pitcher, Pepitone opened the seventh inning with his 27th homer of the season. After Koch struck out Boyer, Stottlemyre singled to left, his fourth hit.

Stottlemyre’s fifth hit, a double to center, came off Koch in the ninth.

On the mound, Stottlemyre held Washington hitless over the final seven innings. He lowered his earned-run average to 1.97. He walked five and struck out five for the second shutout of his career.

Stottlemyre had made his debut on August 12. Shortly after his loss to the Senators exactly one month earlier, the Yankees began an amazing run, winning 19 of 22 through this game. “The triumph carried the Bombers’ runaway September drive almost to ridiculous lengths,” Leonard Koppett of the New York Times wrote.3

Stottlemyre’s pitching and hitting this day extended the Yankees’ winning streak to 11, tied for most in the AL that season. The Yankees’ magic number for clinching the pennant was reduced to four.4 The Senators beat New York, 3-2, in 11 innings the next day to end the streak.

Stottlemyre’s win was the 95th for the Yankees, who finished the season at 99-63. Richardson had three of the Yankees’ 15 hits.5 Howard and Boyer had two each. The Yankees maintained their four-game lead over the Orioles and White Sox, who both won.

In his previous start, September 22 in Cleveland, Stottlemyre had singled his final time up, so the five hits in Washington gave him six in a row. He raised his batting average 124 points to .257, in what turned out to be the only season in his 11-year major-league career that he hit better than .200.

Before Stottlemyre, eight pitchers in the twentieth century had five hits in a game, but it hadn’t been done since 1936, according to a list in the SABR publication Great Hitting Pitchers. Babe Ruth had a five-hit game as a pitcher in 1918.6

Since Stottlemyre, 15 pitchers have had four hits in a game, according to a list provided by Al Yellon for the SABR-L digest on March 11, 2022.7 Dan Haren was the last, in 2010. Noted for his hitting as much as his pitching, Micah Owings had two of those four-hit games. Shohei Ohtani may well have games with five hits before his career ends, but he will do so as a designated hitter, even if he pitches. (A special rule lets pitchers like Ohtani – if another emerges – remain in the game as the DH if taken out as a pitcher.)

Osteen’s loss was his 13th, but he won his last start for the Senators to finish at 15-13 for a team 38 games under .500. His trade to the Dodgers in December 1964 would be significant for both teams. Osteen joined a World Series-bound rotation of Sandy Koufax and Don Drysdale. Washington got the franchise’s premier slugger in Frank Howard, regular third baseman Ken McMullen and starting pitchers Pete Richert (an All-Star) and Phil Ortega.8

“A real hit as a pitcher,” Bob Addie of the Washington Post wrote ruefully of Stottlemyre’s performance. The Post’s beat writer had just watched the ninth-place Senators get shut out for the 20th time in what would soon be a fourth consecutive 100-loss season.9 The Senators were blanked twice more before the season mercifully came to a close, but they did achieve a modest preseason goal: “Off the Floor in ’64” by finishing ahead of the Kansas City Athletics.10

The Yankees clinched the 29th pennant in franchise history by beating the Cleveland Indians 8-3 on October 3, the next-to-last day of the regular season. They lost the World Series to the St. Louis Cardinals in seven games; it was their last pennant until 1976. Stottlemyre concluded his rookie season by starting three World Series games, winning one, losing one, and evoking memories of his late-September batting spree with a Game Five single off future Hall of Famer Bob Gibson. The 1964 World Series starts were Stottlemyre’s only appearance in the postseason.

1 Mantle had an especially tough game before exiting after six innings. He hit into a double play, popped out with the bases loaded and struck out twice.

5 Richardson’s three hits raised his average to .267 (a point below his lifetime mark) with an on-base percentage of .294 (five points below his career figure).

8 The Dodgers also got infielder John Kennedy and $100,000. The Senators also got first baseman Dick Nen as the player to be named later.