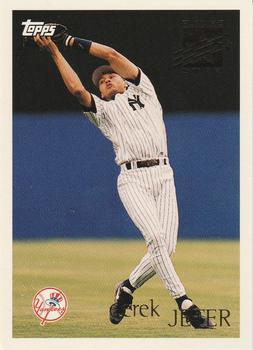 The Cleveland Indians were scheduled to open the defense of their first pennant in 41 years on April 1, 1996, against the visiting New York Yankees. But a blizzard on April Fool’s Day covered Cleveland’s Jacobs Field with 4 to 5 inches of snow,1 and the game was rescheduled for the next afternoon. The postponement delayed not only the pregame ceremonies celebrating the Indians’ 1995 American League championship, but also the debut of New York’s new manager and starting shortstop.

George Steinbrenner introduced Joe Torre as the next Yankee skipper on November 2, 1995. It was the 20th time Steinbrenner had changed managers since he bought the team in 1973.2 Torre replaced Buck Showalter, who guided the 1995 Yankees to their first postseason appearance since 1981. After the Yankees won the first two games of the American League Division Series against Seattle, the Mariners took the next three games to win the best-of-five series. Torre had previously piloted the Mets, Braves, and Cardinals, posting a combined won-lost percentage of .471 in 1,897 games as a manager.

Rookie Derek Jeter opened 1996 as New York’s starting shortstop. Jeter had been called up from Triple-A Columbus at the end of May 1995 after injuries sidelined three Yankee infielders.3 He started 13 games before being sent back to Columbus in mid-June. Recalled in September, he played in two games that month. “When I came aboard (in November), people in our organization felt Jeter was ready,” Torre said. “I heard he was a good hitter. My only concern was the defensive part of it.”4 The 21-year-old Jeter got off to a 0-for-11 start at the plate in spring training in 1996, but his defense impressed the new manager. “If he hits .240 and plays solid defense, he’ll be fine,” said Torre.5

Dennis Martinez was Cleveland’s starting pitcher for the rescheduled game. The veteran, who would turn 41 in May, was making his third straight Opening Day start for the Indians since he signed as a free agent before the 1994 campaign. New York countered with 33-year-old David Cone, whom they acquired from Toronto in a midseason 1995 trade.

A sellout crowd of 42,289 watched Martinez retire the first two Yankee batters before Paul O’Neill doubled to center field. Ruben Sierra followed with a popout to shortstop Omar Vizquel for the final out.

Cone issued two walks in the bottom of the first inning, both on full counts, but Eddie Murray flied out to center, ending the scoring threat. Dennis Martinez followed suit in the Yankees second, issuing a leadoff walk to Tino Martinez and a two-out walk to Joe Girardi. Jeter, batting ninth in the New York lineup, left both runners stranded when he took a Martinez side-arm delivery for strike three.6

Cone walked Jim Thome to start the Indians’ second inning but needed only four more pitches to retire the side. The first two outs came on a double-play grounder to Tino Martinez at first, with Cone taking the relay from Jeter, who was covering second. Jeter then went far to his right, made a backhanded grab of Sandy Alomar’s grounder and threw out the Cleveland catcher at first for the third out.7

With one out in the third, Yankee second baseman Mariano Duncan hit a line-drive single to right. O’Neill doubled down the left-field line, scoring Duncan for the first run of the game. Martinez retired the next two batters to limit the damage, but the score stood 1-0 in New York’s favor.

The Indians went down in order in the bottom of the third, as did the Yankees in the top of the fourth. Cone and Martinez both struck out the final two batters of each frame. In the Indians’ half of the fourth, Cone issued a two-out walk to Murray on four pitches. Murray stole second base. With Manny Ramirez on deck, Cone walked Thome. Ramirez hit a 3-and-1 pitch to deep right that was caught for the final out of the inning.

Jeter led off for the Yankees in the top of the fifth. With the count 2-and-0, he hit a high fastball deep over the left-field wall for his first major-league home run. “He saw the fastball out there, and he jumped out and hit it way out,” Martinez said after the game.8 The Yankees led, 2-0.

Martinez retired the next three batters. Cone, now pitching with a two-run lead, set the Indians down in order in the bottom of the frame. Through five innings Cone walked five batters, but had not allowed a hit.

New York did not score in the top of the sixth, managing only a one-out infield single. Leading off the bottom of the inning, Julio Franco singled, slicing a 1-and-0 fastball into right field for the Indians’ first hit. “He was pitching me in and out,” said Franco. “The first pitch was a fastball outside, and he started to go back inside, but he left the ball over the middle of the plate.”9 Carlos Baerga grounded into a double play. Albert Belle walked, but Murray popped up to the third baseman for the last out of the inning.

The Yankees were retired in order in their half of the seventh. After the Indians started the bottom of the inning with a fly out and a strikeout. Alomar lined Cone’s 3-and-2 pitch to deep right field for a double.

On the first pitch from Cone, Vizquel hit a short fly ball to left-center. With his back to the plate, Jeter made a running catch for the third out. “That was a big play for them,” said Vizquel. “I thought it was going to drop.”10

Alan Embree relieved Martinez as the eighth inning began. He struck out the first batter he faced, but walked O’Neill. Ruben Sierra singled to left, with O’Neill holding at second. A groundout to second moved the runners to second and third with two out. Bernie Williams hit Embree’s 2-and-0 pitch deep over the left-field wall for a three-run homer, giving New York a five-run lead.

Bob Wickman replaced Cone to pitch the eighth inning for the Yankees. Kenny Lofton singled through the shortstop-third base hole. Lofton stole second base and, with Franco walking on the pitch, stole third base. Baerga’s grounder to the second baseman forced Franco, with Lofton scoring the Indians’ first run. Steve Howe relieved after Belle’s infield single and retired the next two batters, ending the threat.

New York added two more runs in the ninth on O’Neill’s two-out RBI single off reliever Paul Assenmacher, followed by Sierra’s RBI double. John Wetteland relieved to start the bottom of the ninth, retiring the Indians in order, and the Yankees won, 7-1.

Martinez gave up two runs on five hits, striking out five and walking two over seven innings in a losing effort. In assessing his performance Martinez said, “I think I threw decent, but David Cone pitched better. … It was a pitching duel, and he pitched well.”11 Cone allowed only two hits and no runs, with four strikeouts over his seven innings of work. But he also walked six batters. “I was flirting with disaster out there,” Cone said in his postgame comments. “Pitching the way I did today is not a formula you want to use too often against this team in this park.”12

The key play of the game was Jeter’s catch of Vizquel’s fly ball in the seventh inning, when the Yankees’ lead was still only two runs. “That play really showed his athletic talent,” said Cone.13 Jeter’s home run in the fifth and his catch in the seventh, both occurring while the game was still tight, made the rookie shortstop’s debut memorable. His manager summed up Jeter’s performance by saying, “He was everything you could ask for today.”14

A friend of mine who worked in downtown Cleveland was able to get two tickets for Opening Day and invited me to attend. At the time I was living in Kalamazoo, Michigan. Derek Jeter played high-school baseball for Kalamazoo Central, and I had followed his progress through the minors in the sports section of the Kalamazoo Gazette.

My most vivid memory of the game was Jeter’s catch in the seventh inning. Although a lifelong Indians fan, I feel lucky I was able to witness the start of a 12-year run for Jeter and Torre that produced 11 division titles, six AL pennants, and four World Series championships.

George Steinbrenner was not at Jacobs Field that day to see the beginning of the Jeter-Torre partnership. The Yankees’ owner was in California shooting an episode of Seinfeld.15

The author accessed Baseball-Reference.com and Retrosheet.org. for box scores/play-by-play information, player, team, and season pages, pitching and batting game logs, and other data.