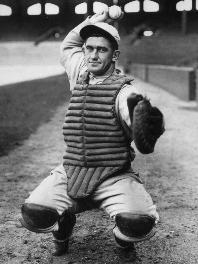 As August 1933 began, the race for the American League pennant was down to two teams, the Washington Senators (61-35) and the New York Yankees (60-36). The Philadelphia Athletics (47-49) were holding down third place in the standings, but, as they were 14 games behind the top spot, the task of winning the title seemed insurmountable. In fact, four other teams were all within 2½ games of third place in the AL.

The Yankees had ended July by splitting a four-game series with the Senators and now hosted a three-game set with the A’s at Yankee Stadium. Philadelphia had closed out July by losing six straight (to Washington and Boston). None of those losses were close games,1 and manager Connie Mack might have been concerned as his team traveled to the Bronx to take on the defending World Series champions. In the seven previous games played at Yankee Stadium this season, the home team had won them all. However, the day before, Philadelphia had played an exhibition game in Watertown, New York, defeating that squad 21-1. Had their luck changed?

A 100-degree heat wave prevailed as the game was played.2 New York’s Daily News reported, “Not a breath of air was stirring. Flags atop the Yankee Stadium hung limp against the poles to which they were attached.”3

Future Hall of Famer Red Ruffing started for the Yankees. Although he had pitched complete games in his previous two outings, he had absorbed the loss in each. George Earnshaw got the pitching nod for Philadelphia. He, too, had lost his last two starts, but he had lasted only two-thirds of an inning in his last time on the mound.

Max Bishop “opened the game with a home run drive to the right field sunfish.”4 It was his fourth round-tripper of the year. After Doc Cramer singled to center, Mickey Cochrane “hoist[ed]”5 his 10th home run of the season into the right-field bleachers. Ruffing had faced three batters and each had scored. He allowed a double and single later in the inning, but poor baserunning kept the A’s from scoring again.6

In the top of the third, Cochrane led off with a line drive to left field. He tried to stretch the hit into an inside-the-park home run but was thrown out at home plate, as Yankees shortstop Frankie Crosetti made a perfect throw from his relay position. The next three Philadelphia batters reached (a throwing error and two walks), and the bases were loaded with just one out. Danny MacFayden was summoned to relieve Ruffing. He struck out Pinky Higgins for the second out, but Dib Williams stroked a single to right. Babe Ruth fielded the hit and threw the ball to catcher Bill Dickey, who fired to first baseman Lou Gehrig as Williams headed for second. Gehrig threw to second base, where third baseman Joe Sewell tagged Williams out, However, all three runners crossed the plate before Williams was out (all runs were unearned). The A’s led, 6-0.

Earnshaw had allowed only two walks in his first two innings of work. In the bottom of the third, he walked Earle Combs with one out and Sewell broke up the early no-hitter with a single to short center. Ruth drew his second walk of the game, loading the bases. Earnshaw then buckled down, retiring Gehrig and Ben Chapman, preserving the shutout.

The score remained 6-0 until the top of the fifth. Cochrane led off with a walk. Two outs later, Bob Johnson singled to left. Higgins walked, loading the bases. Williams came through again, with a single to left. Cochrane and Johnson scored (earned runs this time). New York answered in the home half of the fifth. With runners at the corners and one out, Gehrig rolled a grounder to second baseman Bishop, who threw to shortstop Williams for a force out at second, and Combs scored the Yankees’ first run of the game.

The A’s got the run right back in the top of the sixth. Bishop singled to open the inning but was forced out at second by Cramer. Cochrane walked (his second free pass of the game). With Jimmie Foxx at bat, Cramer was picked off second base. Foxx then doubled to left and Cochrane scored.

In the top of the seventh, Jumbo Brown became the third New York pitcher. With one out, Higgins doubled to right. After Williams walked, Earnshaw drove Higgins home with a bloop single to left. Bishop walked, and Philadelphia had once more loaded the bases. Cramer’s fly ball brought Williams home. Back-to-back singles by Cochrane and Foxx resulted in two more runs and another trip to the mound to make a pitching change, as George Uhle relieved Brown. Uhle walked Ed Coleman, loading ’em up again, but Johnson, batting for the second time in the inning, flied out to end the rally. Now it was 13-1.

After the seventh-inning stretch, Ruth led off with a walk. Samuel Byrd ran for him. After striking out Gehrig and getting Chapman to fly out, Earnshaw gave up a single to Tony Lazzeri and an RBI single to Dickey, but that was all the New Yorkers could manage.

The eighth inning featured an exciting rundown. With one out, Higgins on third and Williams at first, Bishop bounced a grounder to Gehrig. The Yankees first baseman threw home to get Higgins, who had taken off for home, but he stopped halfway toward the plate. Arndt Jorgens, who had entered the game in this inning, replacing Dickey, threw the ball to third baseman Sewell, who thought he could chase Higgins toward home plate and tag him out. According to the Philadelphia Inquirer, “Higgins simply opened the speed throttle and pulled away from Joe to score easily.”7 Meanwhile, Williams advanced to third base on the play and scored on Cramer’s force out of Bishop at second. Cochrane grounded a double into right field, plating Cramer. Three more runs were added to Philadelphia’s tally. The two-bagger meant that Cochrane had just hit for the cycle.

Rube Walberg came on the pitch the final two innings for the A’s. In the ninth, singles by Gehrig, Doc Farrell, and Jorgens produced a run for New York, but when Crosetti flied out to end the game, not too many of the 5,000 fans who remained noticed that the Yankees had scored three runs. Instead, the 16 runs by Philadelphia surely carried the conversation.

The Philadelphia Inquirer summed up the game’s action with, “Cochrane Paces Mates With Bludgeon.”8 Further, Cochrane’s 4-for-4 performance (plus two walks) was described as such: “Every one of his hits was as clean as the queen’s notepaper.”9 The Philadelphia backstop raised his batting average to .289 and added 33 points to his slugging percentage (.498). He had scored three times and driven in four runs. This began a hot streak for Cochrane, who batted .417 (43-for-103) in August, raising his batting average to .319. Two weeks later (on August 18 against the Detroit Tigers), Cochrane had another 4-for-4 game, but he was a triple shy of the cycle.

Earnshaw looked impressive in his lucky sevens (in seven innings of work he allowed seven hits and seven walks, while striking out two) and earned his fifth victory of the season. Ruffing’s record fell to 7-9. Every starting player for the Athletics contributed at least one hit. Williams knocked in five runs. For New York, Ruth was 0-for-1, but he drew three walks. His average dropped to .318, which still led the Yankees starters.

This game marked the most runs allowed by the Yankees all season. In addition to allowing 19 base hits, “the wildness of enemy pitchers greased the way to the plate, the A’s receiving eight passes.”10 Philadelphia swept the series, outscoring the New Yorkers 31-6 in the three games, including a 7-0 shutout on August 3.

The standings on August 1, 1933, served as a predictor for the season. Although the Athletics had dropped into fifth position in late July, they rebounded and finished the season in the third spot. The Yankees were 31-23 down the stretch but finished eight games behind the American League champion Senators.13

The National League featured a doubleheader on August 2 between the Philadelphia Phillies and New York Giants. In Game One, the home team Phillies won 13-6, but the Giants roared back to claim the second game, 18-1. So, on this day in history, in three games, Philadelphia teams outslugged their New York opponents, 40-17.

1 Philadelphia allowed 42 total runs in the six games while scoring only 15.

6 Coleman had doubled and was later out at third base trying to advance on a groundball to third.

11 This record of eight batters hitting for the cycle in the same season was tied in 2009. In both seasons (1933 and 2009), each of the eight cycles was accomplished by a different batter.

12 The other players who hit for the cycle in 1933 were Pepper Martin (St. Louis Cardinals, May 5), Chuck Klein (Philadelphia Phillies, May 26), Arky Vaughan (Pittsburgh Pirates, June 14), and Babe Herman (Chicago Cubs, September 30). That was Herman’s third career cycle.

13 The Senators lost to the New York Giants in the 1933 World Series, four games to one.