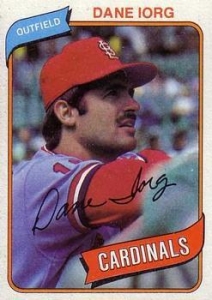 The postgame talk after the St. Louis Cardinals defeated the Atlanta Braves 11-2 on August 28, 1980, focused on Cardinals outfielder Dane Iorg—and with good reason. A day after going 4-for-5 against the Houston Astros, the veteran left-handed batter collected a career-high seven RBIs with two doubles and a single.

But the following day, all attention turned to Whitey Herzog, who resigned as manager—a position he had assumed on June 8 after Ken Boyer was fired—to become general manager. Herzog replaced John Claiborne, who was fired on August 18.

“I don’t want to manage the Cardinals if I don’t have control of my own destiny,” Herzog said.1

With Herzog as manager, the Cardinals went 38-35—a significant improvement over their 18-34 record before he arrived. Yet they were still saddled in fifth place in the National League East Division at 56-69, 12½ games behind the co-leading Montreal Expos and Pittsburgh Pirates, with the Philadelphia Phillies trailing the front-runners by two games.

“I sure as heck didn’t come here to be general manager, but I can do more for the Cardinals as G.M. than as field manager,” Herzog said. “I feel I’m the right guy for the job. I don’t know how anybody can be better qualified for it than me.”2

Although six other candidates were interviewed for the general manager post by Lou Susman, attorney and consultant for club President August A. Busch Jr., Herzog was Busch’s top pick from the beginning.3

Heading into the opener of the four-game series with the Braves at Busch Stadium, the Cardinals boasted the top three batters in the NL: right fielder George Hendrick (.325), shortstop Garry Templeton (.323), and first baseman Keith Hernandez (.323). Their pitching staff’s 3.93 ERA, however, was second-worst in the league.

The Cardinals scored early and often against Atlanta: two runs in the first inning, six in the second, and three in the fourth. Iorg, primarily a backup and pinch-hitter throughout his career, made his second straight start in left field and fourth in a row overall, and he contributed to all three rallies.

With two outs in the first, Hernandez drew a walk from Doyle Alexander and Hendrick was hit by a pitch. Iorg followed with a two-run double to left field to give the Cardinals a 2-0 lead.

In the second, the first four Cardinals singled: Ken Reitz, Mike Phillips, pitcher Bob Forsch, and Ken Oberkfell. Oberkfell’s hit drove in Reitz to make it 3-0.4 An RBI groundout by Tony Scott scored another run, and Hernandez followed with an RBI double that knocked out Alexander. Atlanta reliever Al Hrabosky walked Hendrick intentionally to load the bases—setting up a lefty-lefty matchup with Iorg, who was just 2-for-25 against left-handers coming into the game. Iorg promptly cleared the bases with a double to right to extend the lead to 8-0.

Iorg drove in his final two runs in the fourth with a single to center against Hrabosky, plating Hernandez, who walked leading off, and Hendrick, who followed with a double. Iorg took second on the throw trying to nab Hendrick at the plate, advanced to third on a groundout by Terry Kennedy, and scored on a wild pitch with Reitz batting.

“I’ve been happier driving in more important runs than I did tonight,” Iorg said. “Pinch hitting in the eighth or ninth inning and winning a game … that’s kind of the ultimate, even more so than driving in seven runs.”5

With his 3-for-5 performance, Iorg continued a hot streak that saw him record 13 hits in 22 at-bats, a robust .591 average. He boasted an eight-game hitting streak, including four games in which he had just one at-bat, lifting his season average to .314.

“I’ve been in the game a long time,” said the 30-year-old Iorg, who made his major-league debut in 1977 with the Phillies and was acquired by the Cardinals later that season.6 “I’ve stopped worrying about whether I’m going to play or not. I know when I come to the park and see my name in the lineup, I’ll go play. If not, I’ll just try to stay ready.”7

Iorg went on to start eight more games in a row (all in left field) and extend his hitting streak to 11 games, and he finished the season with a .303 average while playing in a career-high 105 games, including 57 starts.8

St. Louis started its top pitcher, Forsch, and the right-hander authored his seventh complete game of the season, limiting the Braves to six hits with one walk and three strikeouts. Atlanta, which had won nine of its previous 10 games, did not score until the top of the sixth—a leadoff pinch-hit home run by Biff Pocoroba. Another solo homer, by Jerry Royster with one out in the eighth, accounted for the Braves’ other run. With his third consecutive win and fifth in six decisions, Forsch improved to 10-7 while dropping his ERA to 3.47.

The home crowd of 7,203 was the Cardinals’ smallest of the season to that point.9

Former Cardinals manager and longtime coach Red Schoendienst was tabbed as interim manager for the balance of the season, as Herzog began to consider who would become the permanent replacement heading into the 1981 season. Names that surfaced included Gene Mauch, Buck Rogers, and Don Zimmer. One that didn’t: Herzog himself. “I don’t see myself coming back on the field,” he said. “Right now, I’m the general manager.”10 Under Schoendienst, the Cardinals went 18-19 to finish 74-88 and fourth in the NL East, 17 games behind the eventual World Series champion Phillies.

In their third season under future Hall of Fame manager Bobby Cox, the Braves wound up 81-80 for their first winning campaign since 1974. They finished fourth in the NL West, 11 games behind the Astros.

Herzog’s first order of business as general manager came an hour after he was named. He was involved in contact negations with Forsch that ultimately led to a six-year contract worth about $3.5 million for the free agent-to-be.

“In the back of my mind, I thought before the club ever made a decision that Whitey would make an outstanding general manager,” Forsch said. “From a selfish standpoint, though, I thought we’re losing one of the best managers we’ve had. It’s a positive move on behalf of Mr. Busch and the front office. Whitey’s been down on the field, and he’s able to assess the players’ talent and attitude.”11

Less than three weeks after the 1980 season ended, on October 24, Herzog named himself manager, and he filled both roles until April 1982.12 At the 1980 Winter Meetings, Herzog began to transform the Cardinals with three blockbuster trades involving 21 players.13 He was named NL Manager of the Year and MLB Executive of the Year in 1981 by United Press International.

Herzog served as St. Louis’s manager until July 1990—winning the 1982 World Series and two more NL pennants in 1985 and 1987 along the way—and compiled an 822-728 record. He is the third-winningest manager in Cardinals history, trailing Tony La Russa (1,408 wins) and Schoendienst (1,041). Herzog was elected to the National Baseball Hall of Fame in 2010 by the Veterans Committee.

In addition to the sources cited in the Notes, the author used the Baseball-Reference.com and Retrosheet.org websites for player, team, and season information, as well batting and pitching game logs and the box scores for this game:

3 Hummel, “Whitey Had No Alternative but to Become GM.”

4 Oberkfell and Phillips, filling in for Garry Templeton, both had three hits in the game. The Cardinals outhit the Braves 14-6.

6 The Cardinals acquired Iorg, outfielder Rick Bosetti, and pitcher Tom Underwood from the Phillies in exchange for outfielder Bake McBride and pitcher Steve Waterbury on June 15, 1977.

10 Hummel, “Whitey Had No Alternative but to Become GM.”