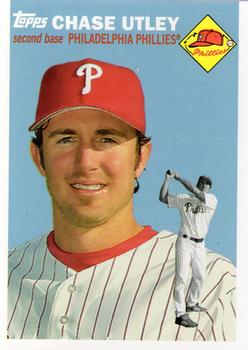 It took the Philadelphia Phillies and New York Mets nine innings, 37 players, 366 pitches, eight pinch-hitters, 13 walks, six stolen bases, two blown saves, and exactly four hours of a Thursday afternoon to play one of the most exciting games of the 2007 season. The Phillies prevailed, 11-10, on August 30 to complete a four-game sweep, closing their gap with the National League East-leading Mets, which had been six games when the series began on August 27, to just two games.

The Phillies had been chasing the Mets all season. In the spring, Phillies shortstop Jimmy Rollins brazenly declared Philadelphia “the team to beat” in the division.1 even though the Mets had won the NL East in 2006 and were heavily favored to repeat,2 while the Phillies had not reached the postseason since 1993.

Coming into the late August series, the teams had battled each other to a near standstill, with the Mets holding a 6-5 lead in head-to-head competition. But the Phillies took the first three games of this series: a 9-2 rout of minor-league call-up Brian Lawrence3 on August 27, a 4-2 walk-off win on Ryan Howard’s 10th-inning homer a night later, and then a 3-2 win behind 44-year-old lefty Jamie Moyer.

The August 30 game was a back-and-forth offensive struggle from the outset. The Phillies’ starting pitcher for the game was Kyle Lohse, who had come in a trade-deadline deal with the Cincinnati Reds for left-hander Matt Maloney.4 The six-year veteran was 1-0 with a 3.95 ERA in five starts for the Phillies.

Orlando Hernandez was the Mets’ starter. The 41-year-old El Duque was in his second year with the Mets after his highly publicized 1997 defection from Cuba and after toiling for eight major-league seasons, primarily with the New York Yankees.5 He came into the game as the Mets’ ace, with a 9-4 record and a 3.07 ERA and having won his last five decisions.

The Phillies were happy to have their star second baseman, Chase Utley, back in the lineup. Utley was playing in his third game after missing a month with a broken hand suffered when he was hit by a pitch from the Washington Nationals’ John Lannan. That injury had forced a deadline deal for Tadahito Iguchi of the Chicago White Sox.6 Iguchi filled in capably for Utley, hitting well over .300.7 Both Utley and Iguchi played prominent roles in this game.

Howard got the Phillies on the board in the first inning when, after Rollins doubled, he deposited an offering from El Duque into the bushes in center field for his 36th home run of the season. Another show of Phils firepower made it 5-0 in the third. Pat Burrell followed Utley’s single with his 24th home run of the year, and after Howard struck out, Aaron Rowand cracked his 22nd.

Lohse blanked the Mets on two singles and a walk through the first three innings, but the Mets struck back in the fourth. David Wright led off with a double and, after Carlos Beltran struck out, Lohse hit Carlos Delgado with a pitch. Shawn Green followed with a double that scored Wright and sent Delgado to third.

Delgado scored on Ruben Gotay’s groundout, Mike Difelice walked, and the Mets narrowed the margin to 5-3 when Lastings Milledge, pinch-hitting for Hernandez, blooped a single to left. That was all for Lohse; manager Charlie Manuel replaced him with Geoff Geary, who retired Jose Reyes to on a groundout to end the inning.

Aaron Sele relieved Hernandez in the fourth and escaped a two-on, two-out situation by getting Mets-killer Burrell to ground weakly to Reyes at short.8 The Mets soon drew even. In the top of the fifth, Endy Chavez doubled, Wright singled and an infield single by Beltran scored Chavez. Deep fly balls by Delgado and Greene’s sacrifice fly brought Wright home with the tying run.

The Phillies quickly regained the lead. With two out and two on in the bottom of the fifth, consecutive singles by Carlos Ruiz, pinch-hitter Shane Victorino, and Rollins scored three runs. The score stood at 8-5 Phillies after five innings.

It stayed that way until the eighth, as relievers Clay Condrey for the Phillies and Pedro Feliciano for the Mets each tossed two shutout innings.

Lefty J.C. Romero took the mound for the Phillies in the eighth. After getting Green to ground out, Romero walked Gotay and was replaced by right-hander Antonio Alfonseca, who got nobody out.

Three walks – one intentional – surrounded a double by Marlon Anderson and Chavez’s single. Four runs were in and Alfonseca was out, replaced by Jose Mesa. Mesa, at age 41 and in the final season of his 19-year career, gave up another run on a groundout, and the Mets had forged ahead, 10-8.

Mets manager Willie Randolph was desperate to salvage a win after three straight losses, so he brought in his closer, lefty Billy Wagner, for a two-inning save.9 Wagner gave one run back on Burrell’s second home run of the game, sandwiched between strikeouts of Utley and Howard. After Rowand walked, Wes Helms, batting for Mesa, brought the crowd to its feet with a long fly to right, but Chavez tracked the ball down.

Tom Gordon set the Mets down in the ninth and the Phillies came to bat down by one, 10-9. Wagner returned to the mound after having thrown 22 pitches in the eighth. Jayson Werth led off with a broken-bat single to left. Ruiz flied out to deep left center.

Manuel then sent Iguchi up to bat for reliever Gordon. On the second pitch, Werth, taking advantage of Wagner’s deliberate delivery, stole second without a throw. On the next pitch to Iguchi, Werth stole third without a throw.

“I was just thinking about making pitches,” said Wagner.11

With the Citizens Bank Park crowd of 42,552 now in a frenzy, Iguchi lashed a line single to left to score Werth and tie the game.

The switch-hitting Rollins came to the plate batting right-handed against Wagner. On Wagner’s second pitch, Iguchi stole second base, as catcher Paul LoDuca’s throw was very wide and very late.

With first base open, Randolph chose to walk Rollins intentionally, to set up a lefty-lefty duel between Wagner and Utley. The move seemed sound. Wagner had struck out Utley in the eighth and he was coming off an injury. Rollins had worn the Mets out all year.12 Wagner had been one of the game’s top relievers for over a decade and was headed for his eighth season in the league’s top 10 in saves.

Utley worked the count full. The next pitch was Wagner’s 41st of the game. Utley lashed a fastball just out of the reach of first baseman Delgado and into right field. Iguchi came around third and slid home ahead of Chavez’s desperation heave. The Phillies walked off with the win, 11-10.

In the announcer’s booth, Phillies analyst Chris Wheeler said, “What an unbelievable game! That’s a four hour, nine-inning game you will never forget.” Fellow analyst Gary Matthews said, “It doesn’t get any better than this.”13

“This was a huge win,” manager Manuel told the Philadelphia Inquirer. “We won four in a row from them. That speaks for itself. Werth’s two stolen bases were huge.”14

Wagner took the blame for the loss. “If you get the opportunity to win a game like that, you’ve got to do it,” he said. “I didn’t get it done.”15

“You’ve got to admire the way they played ball the last four days,” opined Mets manager Randolph. “They took it to us.”16

Burrell, the eight-year Phillies veteran, who had two home runs in the game and four in the series, said, “You’ve got to hand it to the fans. It was the best I’ve seen it since I’ve been here.”17

Phillies center fielder Rowand, who had won a World Series in 2005 with the Chicago White Sox said, “These types of games, these types of series, are momentum builders and confidence builders.”18

As it turned out, the series sweep was not a source of momentum for the Phillies, but an omen for September. The Mets rebounded to rebuild a seven-game lead by September 12, a game better than they stood before the August sweep in Philadelphia.

But the Phillies had one more sweep up their sleeve, taking three games at Shea Stadium from September 14 to 16. That series catapulted the Phillies to 13 wins in their final 17 games, while New York collapsed, finishing 5-12. Philadelphia overtook the Mets and clinched the NL East title on the final day of the season.

This article was reviewed by John Fredland, fact-checked by Bruce Slutsky, and edited by Len Levin.

In addition to the sources cited in the Notes, the author consulted Baseball-Reference.com and Retrosheet.org for pertinent information, including the box score and play-by-play. The YouTube clip shows only the ninth inning of the game.

3 Lawrence was a five-year veteran of the San Diego Padres’ starting rotation, but he had missed a full year after undergoing shoulder surgery. The Mets had signed him as a free agent. He pitched for their New Orleans affiliate until the Mets demoted Jorge Sosa from the starting rotation and brought up Lawrence.

4 Maloney was a top Phillies pitching prospect after being drafted in the third round in the June 2005 amateur draft. He eventually appeared in parts of four major-league seasons with Cincinnati and Minnesota.

5 Hernandez is the half-brother of Livan Hernandez, who had a 17-year major-league career, primarily with Montreal/Washington and Florida. Livan had defected in 1996, a year earlier than Orlando.

7 Filling in for Utley, Iguchi reached base by hit or walk in the first 14 games he played for the Phillies. He had 21 hits in the 14 games for a .362 average.

8 In his career, Burrell hit 42 home runs against the Mets in 551 at-bats, including two in this game.

9 Wagner had not appeared in the first three games of the series after complaining of a “dead arm.”