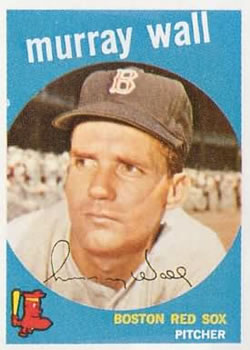 Only two of Murray Wall’s 91 major-league games were played with a team other than the Boston Red Sox. The first came on the Fourth of July, 1950, when the former All-American pitcher at the University of Texas1 made his big-league debut in a late-inning mop-up role with the crosstown Boston Braves.

The second came almost nine years later, as part of an unusual three-day sojourn to Washington. On June 11, 1959, the Red Sox traded Wall and infielder Billy Consolo to the Senators in exchange for pitcher Dick Hyde and infielder Herb Plews. When Hyde arrived in Boston with a sore arm, the teams decided to void the pitching part of the trade, sending Hyde and Wall back to where they started.2 Hyde never pitched for the Red Sox. But Wall appeared in a single game in blue-and-white Senators pinstripes, at Griffith Stadium on June 13, before being shipped back to Fenway Park to complete the season and his career.

It was the first of a three-game series between the Senators and the Cleveland Indians. Manager Joe Gordon had his Cleveland club in contention early on: They stood in second place, 1½ games behind the first-place Chicago White Sox, with a 28-24 record. The Indians had stumbled through a 1-9 stretch between May 30 and June 9 but righted themselves with two straight wins over Baltimore before coming to Washington.

Outfielder Rocky Colavito paced American League hitters with a .606 slugging average, and his 18 home runs placed him one behind Washington’s Harmon Killebrew for the league lead. Among pitchers, Cleveland’s Herb Score was tied for the AL strikeout lead with 77 – he was also second in the league in walks, with 48.3

Manager Cookie Lavagetto’s Washington squad had taken up its usual position near the bottom of the AL standings. With a 24-31 record, the Senators sat in seventh place, seven games out of first, ahead of only Boston. The Senators had gone 3-7 in their previous 10 games. Third baseman Killebrew, on a breakout season as his 23rd birthday approached later in the month, was the Senators’ bright star, leading the league in runs, homers, and RBIs as of June 13. Staff ace Camilo Pascual led the AL in complete games at the start of the day, with eight, and was also among the league leaders in innings pitched.

Righthander Mike García, a holdover from the Indians’ 1954 AL champion team, got the start for Cleveland. Garcia, nearing the end of a distinguished career, entered the game with an 0-4 record and a 2.40 ERA. He’d pitched a complete game against Washington on May 3, losing 3-1 on a trio of unearned ninth-inning runs.

Cuban righty Pedro Ramos opposed him for Washington, bringing a 6-6 record and a 4.25 ERA into the game. Ramos was in the midst of leading the AL in losses for four straight seasons (1958 through 1961). At various points during that stretch, he also led the league in hits, home runs, runs, earned runs, and doubles surrendered, even setting an AL record by serving up 43 round-trippers in 1957.4 That said, Ramos was a legitimately talented pitcher who won 117 games in a 15-year big-league career. Like Roger Craig and Al Jackson with the expansion Mets a few years later, his won-lost record might have been better with a more talented team behind him.

It looked for a time as if the 9,342 fans who turned out for the Saturday day game might go away disappointed. After Killebrew struck out to end the bottom of the first, a rain delay of almost 90 minutes ensued. When the umpires resumed play, the Senators struck for a run in the second inning. First baseman Roy Sievers walked and catcher Clint Courtney singled. A double-play grounder moved Sievers to third, and second baseman Reno Bertoia singled him home. Washington also threatened in the third inning when Ramos tripled to center field with one out on a ball that center fielder Tito Francona nearly caught.5 But right fielder Faye Throneberry and center fielder Bob Allison could not drive him in.

A promising start turned disastrous for Ramos in the fourth. First, Vic Power homered to tie the game at 1-1. Then Francona lined a ball off Ramos’s pitching arm. Ramos recovered to throw out Francona at first but had to leave the game for X-rays.6 Reliever Tex Clevenger struck out Colavito to end the inning.

Sloppy fielding by Cleveland handed the home team two more runs in the bottom half. Sievers reached base when third baseman Granny Hamner misplayed his grounder. Courtney singled to right field, and an error by Colavito allowed Sievers to reach third and Courtney to move to second. Left fielder Jim Lemon drove in both runners with a single.

The teams swapped home runs in the fifth. A solo shot by Hamner made the score 3-2. It was Hamner’s last major-league dinger, and the only one of his 104 career homers to be hit in the American League.7 Killebrew responded with his 20th homer of the season in the bottom half, scoring Throneberry, who had beaten out a bunt. Through five innings, the Senators held a 5-2 lead.

The home-run fireworks were just beginning. With one out in the sixth, Cleveland loaded the bases on singles by shortstop Woodie Held and Power, followed by a walk to Francona. Colavito cleared the sacks with a grand slam. His 19th homer of the year gave the Indians their first lead of the game, 6-5. After left fielder Minnie Miñoso doubled, Wall came in to replace Clevenger. He got Hamner to pop out to second base, which turned into an inning-ending double play when Miñoso was caught off base.

Veteran righty Bud Podbielan had a six-game trial with the 1959 Indians, and he came on to pitch the sixth. The Senators tied the game on a double by Courtney and a single by Bertoia. Gordon pinch-hit for Podbielan in the following inning; the game was Podbielan’s 173rd and last big-league appearance.

In the seventh, Wall surrendered a leadoff single to catcher Dick Brown, then picked him off first. The next hitter, second baseman Ray Webster, hit still another home run to put Cleveland back in the lead, 7-6. It was Webster’s second and last homer in a 47-game big-league career. He was playing, in part, because Billy Martin was hospitalized for possible stomach ulcers.8 Wall retired pinch-hitter Jim Baxes and gave up a single to Held. At that point his Senators career ended: Reliever Hal Griggs came on to get Power on an inning-ending grounder.

Twenty-two-year-old rookie Jim Perry, a future AL Cy Young Award winner,9 came on to pitch the seventh. Allison tied things up once again, 7-7, with the game’s sixth and final homer.

The game stayed tied until the top of the ninth, with Griggs still on the mound for Washington. With one out, Webster hit his only major-league triple, to right-center field, and pinch-hitter Jim Piersall followed with a sacrifice fly to center to give Cleveland an 8-7 lead. The Senators mustered no offense in the bottom of the ninth against reliever Dick Brodowski, and the game ended in 4 hours and 27 minutes10 for the Indians’ third straight win. Perry was the winning pitcher, Griggs took the loss, and Brodowski retroactively got the save.11

For Wall, the game against the Indians was a footnote to a frustrating season. Before the trade, he’d been 1-4 with a 5.40 ERA in 15 games with Boston. After it, he pitched 11 more games for the Red Sox, going 1-1 with a 5.71 ERA. He was demoted to the minor leagues in late July and never returned to the majors, though he continued pitching into 1961. It was a dramatic turnaround for the pitcher who had been Boston’s “bullpen bulwark” the year before, appearing in more games than any other Red Sox hurler.12

As a side note, the June 13 game was also one of the last major-league contests umpired by Frank Tabacchi, who worked third base. AL President Joe Cronin demoted Tabacchi to the American Association on June 22, ending Tabacchi’s big-league career in the middle of his fourth season.13 The move was not publicly explained, although it came in the midst of widespread complaints about the quality of umpiring in the AL. Cleveland general manager Frank Lane opined that Tabacchi was “a better umpire than some others in the league,” adding, “The umpires are a bunch of punch-drunk ex-football players.”14

Image of 1959 Topps card #42 downloaded from the Trading Card Database.

2 Hy Hurwitz, “Sox Get Harshman from O’s for Hoeft,” Boston Evening Globe, June 15, 1959: 31. Consolo and Plews were allowed to stay with their new teams.

3 Chicago’s Early Wynn was Score’s co-leader in strikeouts. New York’s Bob Turley led the AL in walks with 50, with Score and Wynn right behind at 48.

6 Schlemmer. Ramos missed a start but returned to the mound on June 21 to pitch a complete-game win against Detroit.

7 Hamner played 1,531 major-league games, all but 30 of them with the Philadelphia Phillies in the National League. He played 27 games as an infielder with Cleveland in 1959, and three as a knuckleball pitcher with the 1962 Kansas City A’s.

8 Schlemmer’s game story reported that Martin did not have ulcers but would remain in the hospital for more tests and treatment.

10 Schlemmer. Retrosheet gives a game time of 2 hours and 53 minutes, which presumably does not include the lengthy rain delay.

11 Major League Baseball did not recognize the save as an official statistic until 1969.