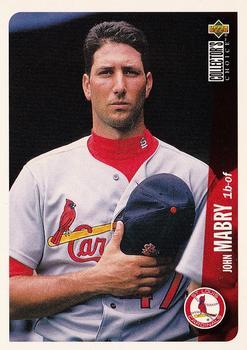 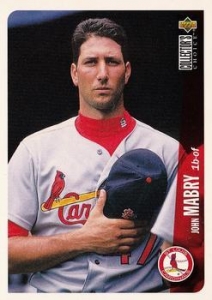 Good hitters have high batting averages; good sluggers have high slugging percentages. Early in his career, St. Louis Cardinals first baseman John Mabry was characterized as a good hitter for average, but not much of a power hitter. In his 1995 rookie season, he batted .307 but slugged only .405. That equates to an average of about three hits in every 10 at-bats, but only four total bases on those three hits. Of Mabry’s 119 base hits during his rookie campaign, 92 were singles, 21 were doubles, and he added one triple and five homers.1

In his sophomore season of 1996, Mabry increased all of his season totals, posting what turned out to be career bests in games (151), at-bats (543), hits (161), doubles (30), triples (2), home runs (13), and runs batted in (74). Mabry’s performance on May 18 against the Colorado Rockies at Coors Field did not by itself earn him the label of “slugger,” but he collected the four hits necessary to hit for the cycle. Further, his four hits were in order of increasing total bases (single, double, triple, home run), known as a natural cycle.

Tony La Russa’s ballclub had not yet found its groove. Although St. Louis finished the 1996 season in first place in the National League’s Central Division, through their first 41games, the Cardinals had a 17-24 record. They had lost eight of their last 11 games coming into this contest. The Rockies were streaky; they won four straight to start the month of May, then lost seven games in a row, and had won their last two before this contest. Manager Don Baylor gave the start to Marvin Freeman. The 6-foot-7-inch right-hander was making his eighth start of the year, bringing a 4.65 ERA with him. Veteran righty Mike Morgan started for the Cardinals, his first appearance of the season.2 A sellout crowd of 48,103 fans packed Coors Field on a Saturday night.

Freeman threw 27 pitches in the first inning, allowing a single and walk but no runs. Morgan was more economical, retiring the side in order on 10 pitches.

Mabry led off the second inning with a single up the middle. An out later, David Bell walked on four pitches, but Freeman retired the next two St. Louis batters. Although Larry Walker reached on a Mabry error in the second, Morgan kept the Rockies hitless in the second and third innings.

Gary Gaetti led off the top of the fourth with a solo home run, well beyond the wall in left-center. The left-handed-batting Mabry then “rip[ped] one down the line,”3 just over first base, and pulled into second with a stand-up double. Bell once again drew a walk after Tom Pagnozzi lined out to right, and Morgan’s sacrifice advanced both runners into scoring position. Freeman stranded Mabry and Bell when Mark Sweeney grounded a ball to first baseman Andres Galarraga, who threw to the pitcher covering the bag for the third out.

Morgan’s no-hitter was broken up in the fourth, when Dante Bichette launched a one-out home run. Both pitchers had made it through four innings, and the score was tied, 1-1. That changed in the fifth. With one down, Brian Jordan walked, for Freeman’s fourth free pass of the game. Ray Lankford smashed his 10th home run of the season to put St. Louis back in front. Gaetti walked, bringing up Mabry. He stroked Freeman’s first offering off the center-field wall, just out of Walker’s reach, and by the time Walker returned the ball to the infield, Gaetti had scored and Mabry had a triple. Pagnozzi drove in Mabry with a single to left, and the Cardinals led 5-1.

Colorado threatened in the home half, loading the bases on Jeff Reed’s single and walks to pinch-hitter Quinton McCracken and Ellis Burks, but Morgan escaped damage. However, he had thrown 75 pitches in his first five innings of work and was tiring.

Left-hander Lance Painter pitched a one-two-three sixth for the Rockies, and Morgan was quickly back on the mound. Walker blasted a leadoff homer to deep right. Galarraga singled. Vinny Castilla hit into a double play, but that was all for Morgan. Tony Fossas entered in relief. Reed, who was batting .336 against Fossas in his career (100 points higher than his career batting average against all teams),4 hit a towering home run to the seats in right. Walt Weiss reached on an infield single, and La Russa made his second trip of the inning to the mound, bringing in reliever T.J. Mathews, who struck out pinch-hitter Pedro Castellano to end the inning, but the Rockies had trimmed the lead to 5-3.

The see-saw scoring continued in the top of the seventh. Gaetti singled off Mike Munoz, the third Colorado hurler, with one out. Mabry, who already had a single, double, and triple, swung at a 2-and-0 pitch and deposited it into the bullpen beyond the wall in right-center for his second homer of the season. After his circuit clout, Mabry’s teammates were cheering his accomplishment, but he didn’t realize he had just hit for the cycle, saying, “I thought they were just congratulating me for the home run.”5 The Rockies got one run back in the bottom of the seventh, on back-to-back doubles by Bichette and Walker.

The score remained 7-4 until the final frame. John Habyan was now on the mound for Colorado. Lankford singled to start the Cards’ inning and stole second base. This proved to be fortuitous for the Cardinals, as Gaetti grounded a ball to second, and instead of a double play, it produced only one out, with Lankford advancing to third, and Mabry coming up. The St. Louis hero was intentionally walked, and with Pagnozzi batting, Habyan uncorked a wild pitch, plating Lankford. Pagnozzi and Bell both grounded out, but St. Louis once again had a four-run advantage.

Dennis Eckersley was summoned from the St. Louis bullpen to close out the ninth. The future Hall of Famer was in his 22nd season and had last pitched on May 12, which was the last game in which the Cardinals had a save opportunity. He had not allowed an earned run in his first 11 games of 1996, but in his last six games, he had allowed six runs (five earned) in 7⅓ innings.

Eric Young Sr. started the fateful inning by drawing a walk. This was only the second free pass of the season allowed by Eckersley.6 Burks smacked his ninth homer, trimming the Cardinals’ lead to just two runs. Bichette grounded a ball into the hole at short for an infield single. Walker swung at Eckersley’s first pitch and singled to center. Galarraga grounded a ball to Mabry, who threw to second baseman Luis Alicea for the force on Walker. Colorado now had runners at the corners with only one out. Castilla had had only one hit in his last five games, so Baylor inserted John Vander Wal as a pinch-hitter. The move proved genius, as Vander Wal took ball one and then launched the next pitch out of the park. The “Rockies’ Horror Show”7 had led to a walk-off win, 9-8.

For the Rockies, both Bichette and Walker collected three hits, and each was a triple shy of hitting for the cycle.

Mabry’s cycle was the first in 1996. Boston’s John Valentin cycled on June 6 against the Chicago White Sox, and the New York Mets’ Alex Ochoa attained the rare feat on July 3, against the Philadelphia Phillies. Mabry’s accomplishment marked the 18th time in St. Louis franchise history that a batter hit for the cycle. The St. Louis Post-Dispatch suggested that Mabry could be perhaps the only batter to hit for the cycle “before stealing his first major-league base.”9

1 Mabry had 157 total bases in 388 at-bats. He finished tied for fourth in the National League Rookie of the Year Award voting. This is somewhat misleading, as Hideo Nomo (1st) and Chipper Jones (2nd) took all of the first-place votes, and Mabry, who tied with New York Mets pitcher Jason Isringhausen and Montreal Expos pitcher Carlos Perez, received only a 3 percent share of the votes.

2 Neither starting pitcher made it through the sixth inning. Coincidentally, neither finished the season with his respective club. Freeman was claimed on waivers by the Chicago White Sox on August 31, while Morgan was released by the Cards on August 28.

6 Eckersley was stingy with the walks. In 63 appearances (60 innings of work) in 1996, he allowed only six walks (and two intentional walks) to opposing batters.

7 Hummel, “Stunned Cardinals Are Victims in Another Rockies’ Horror Show.”

9 “Stunned Cardinals Are Victims in Another Rockies’ Horror Show.” According to baseballroundtable.com/thanks-to-cody-bellinger-a-look-at-rookie-cycles/, 25 players hit for the cycle as rookies. (Mabry was in his second full season.) The Post-Dispatch’s claim is difficult to verify, as modern steal rules have changed, and steals have generally declined with the surge of home runs.