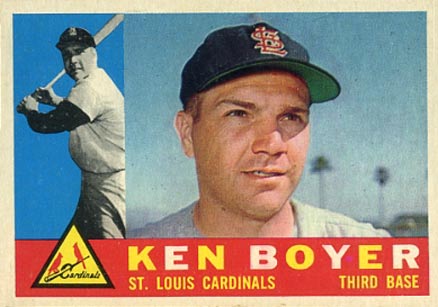 On June 2, 1964, the St. Louis Cardinals began a 16-game road trip. After the first 12 games of the trip, the Redbirds were 3-9, losing series to the Chicago Cubs, Cincinnati Reds, and Los Angeles Dodgers. (St. Louis did win two out of three in San Francisco.) The Cardinals ended the away stretch in Houston for a four-game set. They couldn’t avoid giving up the big inning to their opponent and lost the first two games. So, in the 14-game span leading up to June 16, St. Louis had fallen from third place to eighth in the 10-team National League, and the ninth-place Colt .45s were only a half-game behind them.

The Cardinals needed a little bit of luck.

The St. Louis Post-Dispatch started its wrap-up of the third game with, “Ken Boyer, recently cold as an icicle, hit for the cycle after putting on his lucky sport coat.”1 Boyer had been hitless in seven of his last eight games, and his team had scored only nine runs in that span. As for the coat, Boyer told reporters, “I hadn’t worn it at all on this trip, so I figured I might break our bad luck if I put it on. Yes, I’ll wear it tomorrow, too.”2

Boyer had indeed been struggling, since he injured his back swinging at a pitch from Juan Marichal.3 The cold and damp weather in San Francisco may have contributed to his slump, but the heat in Houston must have surely helped. Or maybe it was just the lucky coat. Boyer displayed a 4-for-5 performance, breaking out of his slump, on a Tuesday night game at Colt Stadium, before 12,383 fans.

Curt Simmons, who had been “pushed around in his last two starts,”4 had the mound duties for the Cardinals. The left-hander had actually missed his last scheduled duty in the rotation because of “sacroiliac problems.”5 However, he assured skipper Johnny Keane that he was ready to go. Houston manager Harry Craft sent right-hander Bob Bruce to oppose Simmons. Bruce had a record of 6-2 with a 2.88 earned-run average. By contrast, Simmons was also in search of his seventh win of the season, but he had lost his last three decisions.

The first two innings went by without much action. Each team scratched a single in the second inning (Boyer for St. Louis and Ken Aspromonte for Houston), breaking up any notions of a no-hitter.

Things changed in the top of the third. Julian Javier led off with a single to right. Simmons bunted him to second. Curt Flood singled to the hole at shortstop, advancing Javier to third base. After Lou Brock flied out, Bill White laced a single into center field, and Javier scored the first run of the game. Boyer then knocked a double to center, driving home Flood. This proved to be all the run support Simmons needed. Although Simmons hit Walt Bond with a pitch in the fourth, the Colt .45s could muster no offensive threats.

In the top of the fifth, Brock singled with one out and advanced to second when Houston center fielder Mike White misplayed the ball. Brock moved to third on a groundout and scored when Boyer smashed a triple to deep center. This was the third time through the order for the Cardinals batters, so Craft made a pitching change. Don Larsen entered in relief of Bruce. The 6-foot-4 Larsen had been sold by the Giants to Houston on May 20. This was his fifth appearance for the Colt .45s (all in relief), and he sported a stingy 1.04 ERA.

Larsen’s first batter, Bob Skinner, grounded a ball to first baseman Dave Roberts, who turned the potential final out of the inning into an error, and Boyer scored. Dick Groat and Tim McCarver then hit consecutive singles and Skinner scored, making the score 5-0.

With two down in the visitors’ sixth, Brock shot the ball to left-center. According to coach Joe Schultz, “Brock outran the ball,”6 and wound up at third with a triple, even though he stumbled rounding second base. But he was stranded there.

Simmons retired the Colts in order in the fifth and sixth frames. Boyer led off the top of the seventh and delivered a home run to deep left field. With the circuit clout, his 10th of the season, he had hit for the cycle. Further, since the four hits by Boyer were in the order of increasing total bases (single, double, triple, home run), he had accomplished the rare feat of hitting for a natural cycle.

Simmons had allowed only one hit — Aspromonte’s bunt single — until the seventh inning. Rusty Staub’s second home run of the season, a solo shot well beyond the right-field fence, spoiled the shutout bid.

Simmons’s teammates were determined to get that run back, and in the very next inning (top of the eighth), they did. Rather, Javier did, single-handedly. He led off with a single up the middle and into center field. With Simmons at the plate, Javier stole second. On the next pitch, he took off for third. In an attempt to catch Javier, Houston catcher Jerry Grote threw the ball away and Javier scampered home for the unearned run, with Simmons watching from the batter’s box. The Cardinals led 7-1, and that was the final score.

Simmons ended up with a four-hitter. He faced only 31 batters and struck out four. St. Louis had snapped its five-game losing streak. The Cardinals won their next three games and things seemed to have turned around. St. Louis was 17-11 in July, 18-10 in August, and 21-8 in September. Although they lost two out of three in October, the Cardinals won the National League pennant on the last day of the season. (Curt Simmons started that game, too.) The NL champs faced the New York Yankees in the 1964 World Series and defeated them in seven games.

On his way to hitting for the cycle, Boyer had scored two runs and driven in three. He raised his batting average to .313, and his OPS jumped 42 points to .899. He was hitless just three times in his next 15 games. Maybe it was the lucky coat. He went on to garner the National League’s Most Valuable Player Award at the end of the season, as he smacked 185 hits and led the senior circuit with 119 runs batted in.

This was the second time in his career that Boyer had hit for the cycle. His first cycle occurred on September 14, 1961. In that game, his 11th-inning home run beat the Chicago Cubs, and that was his first career five-hit game. It was also the first cycle to have a walk-off home run complete the cycle. Dating back to 1887, Boyer was the 12th and 13th player in Cardinals franchise history to accomplish the cycle.

In total, four batters hit for the cycle in 1964: Jim King (Washington Senators, May 26 against the Red Sox); Boyer; Willie Stargell (Pittsburgh Pirates, July 22, against the Cardinals); and Jim Fregosi (Los Angeles Angels, July 28, against the Yankees).

I was fortunate to meet Curt Simmons in March 2006. As an Officer Representative to the Army Baseball team, I was hanging out at Hall of Famer Robin Roberts’s house near Tampa, Florida, for a spring-training cookout for Army’s coaching staff.8 Our team had spent a week of games in the Tampa area and practices at the New York Yankees’ facilities across from Legends Field (now George M. Steinbrenner Field). On the last evening of our trip, Curt stopped by the Roberts house, as he often did. He and Robin were old friends. The two of them started telling their tales of games with the Phillies, with memories that were as sharp as ever. They pulled out the Baseball Encyclopedia and more stories kept pouring forth. I just sat there (with my food and beer), taking it all in, wondering how many times in the past 50 years the two of them had done this very thing.

7 As of the end of the 2019 season, there have been 330 total cycles hit in the major leagues. The order of hits is known for 294 of them. Fifteen of them were natural cycles.

8 Robin’s son Dan was the manager of the Army team at the time. On the last day of the spring break trip, the coaching staff gathered at the Roberts house for a cookout; we let the cadets have the day off, and many spent those days with families who had also come for spring-break baseball.