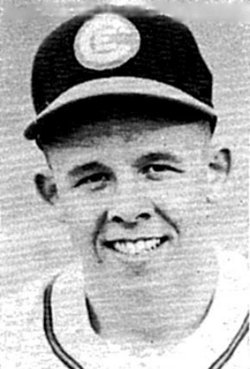 In March 1964 Jerome Arthur “Jerry” Hummitzsch ranked as a sure-thing prospect with the Milwaukee Braves — a hard-throwing, confident, athletic kid from Sheboygan, Wisconsin, an hour north of Milwaukee. Coming off a good year in the minors in 1963, he earned praise from manager Bobby Bragan in spring training and was considered an up-and-comer once he got his control straightened out.1

Only two months later, some of the big-league players Hummitzsch had trained with served as pallbearers at his funeral in Sheboygan. The 23-year-old hurler rolled his convertible on May 22 on a winding road in Texas, where he was pitching for the Austin Senators of the Double-A Texas League. The crash killed him and seriously injured his teammate and passenger, future big leaguer Walt Hriniak.2 In one tragic moment, Hummitzsch’s story moved forever from can’t-miss to what-could-have-been.

The night before his death, Hummitzsch made a dominant final appearance, pitching a 10-inning, three-hit shutout in which he also scored the winning run. Decades later, that game between Austin and the visiting Fort Worth Cats still stands as evidence of what Jerry Hummitzsch might have accomplished. “What a future that kid had. Fantastic,” said Jim Fanning, who attended the game as a Braves scout and later was a big-league manager and general manager with the Montreal Expos. “How close he was to the big leagues.”3

Hummitzsch starred in basketball and football at North High School in Sheboygan but played semipro and amateur baseball because the school didn’t have a baseball team.4 He came to the Braves’ attention when he participated in the Silver Sluggers program, a series of team-sponsored baseball schools for young players in Wisconsin and Upper Peninsula Michigan. Hummitzsch made the program’s all-star team of top players and pitched at Milwaukee’s County Stadium. He spent a year at Pueblo (Colorado) Junior College but then decided to go professional, choosing the Braves over 15 other teams and receiving a reported $30,000 bonus.5

Hummitzsch struggled in his first minor-league season, going 2-10 between two levels of minor-league play in 1961 and walking 88 hitters in 105 innings. As he learned more about pitching, he improved each year. At Double-A Austin in 1963, he went 10-9 with a 3.13 ERA, pitched a no-hitter, and made the league’s all-star team.6 He returned to Austin in 1964 specifically to work on his control7 and seemed to have mastered that task. He entered his start on the night of May 21 with a 2-2 record and a 1.67 ERA in four games, walking only seven hitters in 27 innings.

Starting on the mound for Fort Worth was 24-year-old righty Bill Ballou, in his sixth and final minor-league campaign. For the full season, Ballou posted a 7-14 record and a 3.48 ERA in 31 games. One other future major leaguer took the field that night: Dick Stello, who worked 20 seasons as a National League umpire, was half of the two-man umpiring crew.12

The Cats struggled with their bats all season, compiling the Texas League’s lowest batting average at .224.13 In the four-game series capped by Hummitzsch’s shutout, the Cats mustered just 14 hits and a single unearned run against Austin pitchers, with future big leaguers Pat Jarvis and Herb Hippauf each throwing complete-game wins.14

Hummitzsch had missed three previous starts with tendon soreness and a pulled groin muscle.15 But from the moment he took the mound in front of 349 fans, he was clearly back on his game, with his two main pitches — a blazing fastball and a diving forkball — both effective.16 Fanning later said the young pitcher looked stronger and more in command against the Cats than he had during his no-hitter the year before.17

The toothless Cats managed no hits until the fifth inning, when Raudman laced a double past first baseman Dan Kern but was stranded on second. Kubiak singled in the sixth, right fielder Ken Faulkner singled in the ninth, and Hummitzsch walked one batter — and that summarized Fort Worth’s entire offensive output.18 The biggest challenge to Hummitzsch’s pitching rhythm might have been a change in catchers: Starting backstop Jim Hay left the game in the sixth after Theobald fouled a ball off his right thumb. But Hummitzsch remained just as effective pitching to backup Butler Powell the rest of the way.19

Ballou pitched gamely, keeping Austin off the scoreboard for a full nine innings. Over that time, he scattered eight hits, walked no one and struck out three. Austin came close to putting the game away in the ninth, when singles by left fielder Barry Morgan, Kern, and Clark loaded the bases, but the Senators could not push across what would have been the winning run.20

In the 10th, Hummitzsch, so dominant on the mound, took offensive matters into his own hands. Told to swing away by manager Hicks, he led off with a double to left-center field. Grammas summoned reliever Frank Hodges. Third baseman Bill Lucas, who collected three hits for the Senators that night, bunted Hummitzsch to third.

Hodges walked Bales and was yanked in favor of another reliever, lefty Loyd Wallis, a 31-year-old who had been pitching in Organized Baseball on and off since 1950. Hicks summoned an even grayer graybeard, 37-year-old infielder Mike Fandozzi, to pinch-hit. Fandozzi, the league’s oldest player, poked Wallis’s first pitch over the head of first baseman Morhardt for a single to bring Hummitzsch home with the game-winning run.21

The game wrapped up in 2 hours. Hummitzsch’s 10 innings of shutout ball brought his ERA down to 1.22, best among the league’s starting pitchers.22

The day after the game, May 22, was Hriniak’s 21st birthday. Early that morning, Hummitzsch and Hriniak went out to unwind on a fishing trip.23 The players were traveling in Hummitzsch’s new Pontiac Bonneville convertible when the car missed a turn on what newspapers described as a “twisting” road. The car knocked over four guard posts and flipped over, stopping almost 200 feet away from the point where it began to skid. Hriniak, thrown free of the car, suffered severe lacerations and possible internal injuries. Hummitzsch, trapped beneath the car, was killed.24

The Milwaukee organization honored its homegrown prospect with a moment of silence before the Braves’ May 23 home game against St. Louis.25 Two days later, six players — including Warren Spahn and Joe Torre — served as pallbearers at Hummitzsch’s funeral.26 Braves manager Bragan, team President John McHale, and other officials also attended.27 Austin manager Hicks called Hummitzsch’s death “a shock to say the least,” while another Braves scout, Al LaMacchia, raved about his potential: “Jerry had an above-average fastball — I mean above average for a major-league pitcher. … He was so close to the big leagues … so close.”28

The Braves also created a trophy bearing Hummitzsch’s name for the most valuable player in the Silver Sluggers all-star game. The first winner of the Jerry Hummitzsch Memorial Trophy, awarded about 2½ months after Hummitzsch’s death, was pitcher Vern Geishert of Richland Center. It was a fitting choice: Five years later, Geishert reached the big leagues with the California Angels, attaining the major-league goal that Hummitzsch missed.29

Neither Baseball-Reference nor Retrosheet provides box scores of minor-league games, but the May 22, 1964, edition of the Austin American-Statesman published a box score.

1 Bob Wolf, “Braves Hand Leadoff Post to Swift Alou,” The Sporting News, February 29, 1964: 22. Another story by Wolf on the same page, “Bobby Foresees Snazzy ’64 in Getaway Show,” also cites Hummitzsch among a group of young players with a chance to help the Braves in 1964.

8 Team members who reached the majors but did not appear on May 21 include Hal Breeden, Clay Carroll, Herb Hippauf, Pat House, Pat Jarvis, George Kopacz, Bob Moorhead and Arnold Umbach. Not all of these players would have been on the roster on May 21.

9 While Hriniak appeared exclusively as a catcher during his big-league career in 1968 and 1969, he played extensively at second base, shortstop, and third base as a minor leaguer.

11 Team members who reached the majors but did not play in this game include Ellis Burton, Dick Burwell, Bill Connors, John Felske, George Gerberman, Don Kessinger, Fred Norman, Don Prince and Corky Withrow. Not all of these players would have been on the roster on May 21.

12 Stello’s Sporting News umpire card, accessed through Retrosheet, confirms that he worked in the Texas League in 1964. The other umpire, former minor-league player Hank DiJohnson, did not reach the majors.

13 The Senators had the second-lowest team batting average in the six-team league, at .242. The league-leading Albuquerque Dukes hit .274, and the entire league averaged .255.

16 Information on Hummitzsch’s pitching repertoire from “Two-Pitch Hummer Dreams of Big Time,” The Sporting News, March 21, 1964: 21. Hummitzsch said he was working on a curve in spring training 1964 and had discarded a slider because it made his arm sore.

23 Hummitzsch reportedly had recently bought a small fishing boat and had been heard asking where he could rent fishing equipment.