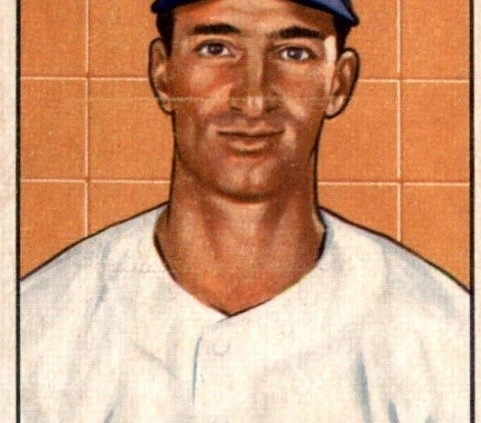 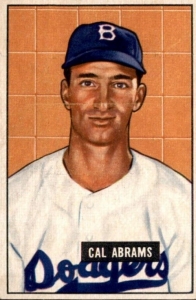 As the resurgence of the Brooklyn Dodgers as a pennant-contending team in the 1940s moved into the next decade, there is one thing that scorekeeping fans could count on since 1949. Campy, Gil, Jackie, Pee Wee, Billy, Duke, and Skoonj. For the radio broadcast, you could pencil in their names into the lineup on your scorecard and perhaps add Newk, Oisk or Preacher as the starting pitcher. Maybe you were as fortunate as the author’s family to have a black-and-white Andrea television set with a 12-inch screen that always seemed tuned into a New York City station for a ballgame.

In the 1951 season, seven Dodgers played at least 139 games at their position. In fact, five players—Gil Hodges, Jackie Robinson, Pee Wee Reese, Duke Snider, Carl Furillo—each appeared in over 150 games that season. Wait a minute. So who’s playing left field? Just as we examine one answer—Cal Abrams—several others emerge as this story unfolds.

Manager Chuck Dressen’s lineup card had two noteworthy entries as the Dodgers were about to complete an 11-game road trip in Pittsburgh on May 23. Rookie Don Thompson was starting in center field for Snider, who was injured in the previous night’s game.1 And Cal Abrams, riding a hot streak, was in left.

Abrams spent April exclusively as a pinch-hitter while Thompson and Gene Hermanski took turns for most of the starts in left field. The 27-year-old Abrams, always a .300 hitter in the minor leagues, was inserted into left on May 3 when Dressen wanted more offense in the lineup. Abrams delivered two hits from the leadoff spot that night and the Dodgers shut out the Reds, 8-0. After the game, Dressen declared that Abrams, a left-handed hitter, would remain in the lineup even against southpaws.2 Abrams delievered handsomely with a 10-game hitting streak to begin his stretch as a starter.

By now, three weeks after Abrams became a regular, the Dodgers’ bats were scorching. In winning their past three games—a doubleheader sweep in Cincinnati and the previous night’s 17-8 shellacking of the Pirates—they had scored 41 runs on 46 hits. In fact, Abrams had contributed three hits in each of those three games.3 It was still early in the season, but Abrams found himself batting a gaudy .452, 28-for-62, just ahead of more familiar teammates like Robinson (.407) and Reese (.388).4

Don Newcombe (3-2, 4.67 ERA) was Dressen’s choice to start for the Dodgers against Pittsburgh. He had lost to the Pirates at Ebbets Field earlier in the month, but had a 7-2 career mark against them in his three seasons with the Dodgers. Pirates starter Mel Queen (3-2, 3.94 ERA) was purchased by the Pirates from the New York Yankees in 1947, and in his National League debut he beat the Dodgers in Brooklyn with a complete-game performance. He hadn’t beaten them since that game.

The Dodgers offense didn’t waste any time. A caught-stealing negated Abrams’ leadoff single in the first inning, but Reese walked, Robinson singled, and Hodges hit his 14th home run of the season for a 3-0 lead.

The Pirates didn’t threaten at all against Newcombe until the fourth inning. With two outs, Newcombe hit Gus Bell. That might have unnerved Newk a bit. On the very next pitch, Wally Westlake hit his 13th homer of the season and the Pirates trailed 3-2. Keeping pace? At this point in the season, Hodges and Westlake were first and second in the National League home-run race.5

The Dodgers answered. Again, Abrams opened the fifth with a single, and two more singles by Reese and Robinson added the first run of the inning. Queen walked Hodges to load the bases. Furillo’s lineout to center field scored Reese and advanced the runners.

Queen intentionally walked Roy Campanella to load the bases again and was replaced by Bill Werle. Werle struck out rookie Thompson for the second out, but former Pirate Billy Cox hit a grand slam, his first as a Dodger, putting the game out of reach, 9-2.6

Brooklyn nonetheless added two runs in the ninth. Reliever Bill Koski threw six pitches to four batters, resulting in singles by Robinson and Hodges, a sacrifice by Furillo, and Campanella’s single put the score at 11-2.

As for Newcombe, he sailed along relatively unscathed until the ninth inning. In the fifth and sixth innings, he gave up singles to Werle and former Dodger Pete Reiser, respectively. Both were erased by double plays, two of the four that the Dodgers recorded for the game.

Two fielding miscues in the ninth meant Newcombe had to throw 25 pitches (129 total) to finish it. After George Metkovich walked, Hodges uncharacteristically muffed Reiser’s foul ball. With new life, Reiser singled to center and the Pirates loaded the bases when Reese muffed Ralph Kiner’s grounder to short. Two “dribbling hits”7 by Bell and Westlake gave the Pirates two unearned runs. A Robinson-to-Reese-to-Hodges double play made amends to end the game and Newcombe had his complete-game victory.

For the fourth game in a row, Abrams had collected three hits to raise his league-leading batting average to .470. The Brooklyn Daily Eagle proclaimed him “the most famous resident of Long Island.”8 Soon after the game, the front page of The Sporting News blared “Bats May Carry Dodgers to Flag Romp” and featured a large caricature of Robinson, Snider, Hodges, and Furillo and a photo of Abrams.9

Joe King reported in The Sporting News about interviews given by Branch Rickey, in his first season as general manager of the Pirates after leaving the Dodgers after the 1950 season. Rickey claimed the Dodgers were “a team” with Abrams, having little doubt that the roster largely built by Rickey during his eight-year tenure in Brooklyn would “breeze in” to the National League pennant. Current general manager Buzzie Bavasi was quick to dispute Rickey’s claim that he always knew Abrams would be a great leadoff hitter.10

So, who’s playing left field? Depends. In 1951, seven different players manned the position, including Pafko (70 games), Thompson (56) and Abrams (34).13 In 1952 the job belonged to Pafko (108 games). Abrams got one start, appearing almost exclusively as a pinch-hitter before being traded to the Cincinnati Reds on June 9. After the season, Pafko was traded to the Milwaukee Braves.

As for Abrams, the back of a 1951 Bowman baseball card reminds us that he will always be remembered for one Sunday afternoon at Ebbets Field in 1950. The card read, “During that exciting last day of the season, when the Phils were battling the Dodgers for the pennant, Cal was scampering in with the potential winning tally for the Brooks when Richie Ashburn’s perfect peg to the plate kept the run from scoring.” The moment deserves a more complete explanation. Bottom of the ninth, 1-1, Reese on first, Abrams on second, no outs, Snider batting.

Ashburn was playing shallower in center field than usual. Author Roger Kahn said Ashburn wanted to back up a possible sacrifice bunt and subsequent throw to second.15 Others, including Ashburn, said that the pickoff sign at second base was on, but pitcher Robin Roberts missed the sign.16

Regardless, Snider hit the first pitch on a line to center on one hop, third-base coach Milt Stock gave Abrams the green light, Ashburn threw a strike to catcher Stan Lopata, and the ball arrived while Abrams was still 15 feet from home plate.17 He had no chance, but the Dodgers still did. Roberts intentionally walked Robinson, but retired Furillo and Hodges. The Phillies won the pennant when Dick Sisler hit a three-run homer off Don Newcombe in the 10th inning.18

What if Ashburn was playing normal depth in center or Stock holds Abrams at third for a bases-loaded, no-outs situation or Abrams slides into Lopata at the plate? Baseball history is filled with what-ifs. After the game Stock had no regrets about his decision and manager Burt Shotton supported his third-base coach.19 Others have noted that Shotton did lay some blame on Abrams’ baserunning.20 Both Stock and Shotton were fired in the offseason.

Abrams was philosophical about how he was remembered as a Dodger. Of the fans, he noted, “[T]hey remember the play so vividly, and I’m thankful they do. … Had I reached home, I don’t think they would have remembered it as well.”21

The author accessed Baseball-Reference.com for box scores/play-by-play information (baseball-reference.com/boxes/PIT/PIT195105230.shtml) and other data, as well as Retrosheet.org (retrosheet.org/boxesetc/1951/B05230PIT1951.htm). The Cal Abrams baseball card #152 is from the 1951 Bowman series obtained from the Trading Card Database.

6 Billy Cox, more known for his slick fielding, hit 66 home runs in his career, including three grand slams. He hit his first grand slam as a Pirate on April 23, 1947 at Sportsman’s Park in their 8-5 victory over the Cardinals, as confirmed by review of Retrosheet data. The Brooklyn Daily Eagle (Harold C. Burr, “Abrams Near .500 as Flock Comes Home,” Brooklyn Daily Eagle, May 24, 1951: 27) erroneously identifies Cox’s grand slam as his second of the 1951 season.

13 The other four Dodgers left fielders in 1951 were Gene Hermanski (18 games), Dick Williams (15), Tommy Brown (5), and Jim Russell (4). After the trade, Pafko became the most frequent starter in left field for the balance of the season. Abrams started in left field for only eight more games, none in August and September.