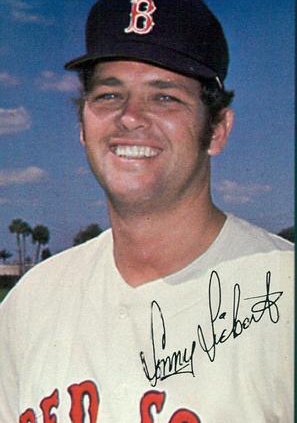 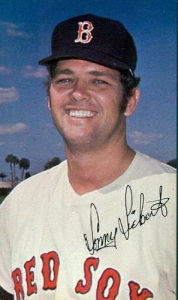 “So baseball is dead, like watching grass grow,” wrote Clif Keane in the next day’s paper, after the Boston Red Sox held off the Oakland A’s for a one-run win. “It would take the greatest of script writers three weeks of head scratching to come up with the drama that unfolded at Fenway Park last night. …”1

Bob Ryan, the longtime Boston scribe, years later called this game “merely one of the most electrifying regular season spectacles in the last 50 years of Red Sox baseball.”2

The game in question was a Friday evening battle of two of the season’s hottest teams, and hottest pitchers. The Red Sox started the day 28-15 and held a three-game lead over the defending champion Baltimore Orioles. The young star-filled A’s, meanwhile, were 31-16, seven games up on the second-place Minnesota Twins, and on their way to greatness.

Sonny Siebert, the biggest story in Boston’s promising young season, took the mound for the Red Sox. In 10 starts prior to this evening, the tall right-hander had posted an 8-0 record and a 1.62 ERA. The 34-year-old had had a fine career (98-66, 2.92 ERA prior to the game, with a no-hitter and several very good seasons), but his first two months were a pleasant surprise and a key to Boston’s place in the standings. To top it off, he had hit three home runs, on his way to a career high of six.

Siebert’s pitching counterpart was an even bigger story, the story of the season. Vida Blue had brief call-ups the previous two years and had thrown both a no-hitter and a one-hitter in September 1970. But although the 21-year-old Blue was no longer a rookie, it is likely that most fans around the country did not know who he was when the 1971 season began. That would soon change.

After struggling on Opening Day and lasting just 1⅔ innings, the left-hander won his next 10 decisions, a stretch that included 10 complete games and five shutouts. In his second start of the season, he threw a rain-shortened six-inning shutout with 13 strikeouts, missing out on a chance to threaten the then-record of 19.

When Blue took the mound on May 28, the current issue of Sports Illustrated featured him in full pitching stride on its cover, with the accompanying headline: “The Year of the Hot One – Hottest of All, Oakland’s Vida Blue.”3 He had a 10-1 record, with a 1.03 ERA.

Both teams had other stars – Carl Yastrzemski and Reggie Smith were off to fine starts for Boston, and Sal Bando and Reggie Jackson for Oakland – but it was the pitchers who made this the most anticipated game of the season. Not that the game needed more drama, but it also marked the first return to Boston of Dick Williams, who had managed the Red Sox to a 1967 pennant only to be fired two years later amid player recriminations. The crowd of 35,714 was well over the old ballpark’s seating capacity, forcing fans to stand three deep behind the grandstands or sit in the aisles.

The fans cheered Williams when he brought out the lineup, they cheered for Blue when he batted, and they especially roared for Siebert. There were thousands of fans out on the street, unable to get inside, but listening on radios and cheering the action along with the lucky ones in the seats.4 The excitement lasted until the final out.

The A’s opened the scoring in the top of the first on a home run into the right-field bleachers by Jackson, but the Red Sox came back with a home run to deep center by Rico Petrocelli with a man on. With the double-no-hitter hopes dashed, both men settled down and began retiring the opposition. Boston’s 2-1 lead held through the fifth inning.

Roger Angell, the venerated New Yorker writer, made the trip and was taken by Oakland’s ace. “Vida Blue, I discovered, is a pitcher in a hurry,” wrote Angell. “Each inning, he ran to the pitcher’s mound to begin his work and ran back to the dugout when it was done. … In the field, he worked with immense dispatch, barely pausing to get his catcher’s sign before firing; this habit, which he shares with Bob Gibson and a few others, adds a pleasing momentum to the game. … His pitches, mostly fastballs and always in or very close to the strike zone, did not look especially dangerous, but the quick, late cuts that most of the Red Sox batters were offering suggested what they were up against.”5

In the bottom of sixth, Petrocelli struck again, launching a solo home run into the left-field screen. Dave Duncan countered with a similar blast in the top of the seventh, making the score 3-2.

Siebert, the apparent second banana of this duel, was retiring the A’s with curveballs and sliders, but in the seventh inning he felt discomfort in his arm that made him rely on the fastball. He told manager Eddie Kasko that his arm was getting stiff. “I’ve had arm trouble the last two starts and he knew it,” he said later.6 In the eighth Jackson hit a line drive to deep center that Billy Conigliaro caught against the wall.

In the bottom of the eighth, Smith singled and moved to second on a groundball. With two outs, Blue walked Petrocelli intentionally, and Williams brought in Bob Locker to face George Scott. It was only the third time so far in 1971 that Blue had been removed from a game and only the second time in the middle of an inning. The Boston crowd gave Blue a long standing ovation.7

This game deserved a tense ninth inning, and it got one. With one out, Bando hit Oakland’s third home run of the night, on only its sixth hit. Remarkably, these were the first three home runs Siebert had allowed in the season, in his 11th start.

After retiring Rick Monday on a popup, Siebert needed just one more out. After the count ran to 3-and-1 on Duncan, Siebert raised his hands and called to the dugout. As the confused throng looked on, Kasko came to the mound and Siebert told him he was through. Kasko called for Bobby Bolin in the bullpen. As Siebert departed, the boos for Kasko turned into a standing ovation for the departing hero.8

“My arm stiffened and I was throwing nudist pitches, which had nothing on them,” said Siebert in the locker room.9 “I lost my slider and curve in the last two innings. I wanted so hard to throw a slider to Duncan, because I think I can get him out on the pitch. I just didn’t feel I could do it.”10 (Siebert stayed in the rotation, was named to his second All-Star team in July, and finished the season 16-10.)

Bolin’s first pitch to Duncan was blasted deep down the left-field line, just foul. The second was another long foul. His third was low and away, a harmless foul tip into the glove of catcher Duane Josephson to end the game. “I thought the ball that Duncan hit was about two inches foul – no more,” manager Kasko said. “Whew!”

Although Siebert had won his ninth straight, the conversation in both locker rooms focused on Blue. “I don’t know how the hell I hit him,” Petrocelli said. “I really didn’t expect to hit him since I’m a curve ball hitter. I’ve never been the world’s greatest fast ball hitter.”11 “Looked like a man who had been around for 10 years,” added Yastrzemski. “He moved the ball around beautifully. He’s a helluva pitcher, believe me.” Siebert joined the chorus, saying his counterpart was “as fast as Sam McDowell.”12

The talk of the town remained philosophical. “The only thing I can do is go out the next time and try twice as hard,” said Blue. “The first fast ball Petrocelli hit was a good one, the second one wasn’t so good. I threw about 60 percent fast balls, and 40 percent curves.” When told that the packed ballpark was there to see him and Siebert, he allowed, “That’s great for baseball, and I dig baseball.”13

Asked about the standing ovation, Blue added: “That just goes to show you baseball isn’t as dead as some people think it is. I heard it, but I was kind of down. I appreciated it.”14

The game featured nine innings of drama, five home runs, several long ovations, and two memorable pitching performances. The entire affair took just 2 hours 15 minutes, but it is doubtful that any of the lucky fans in the old ballpark felt cheated.