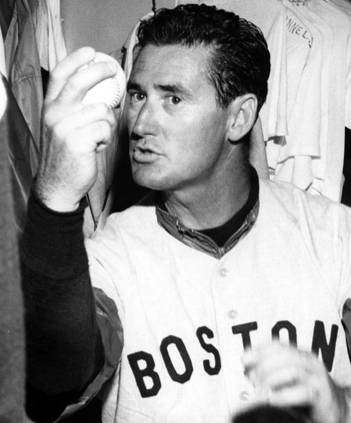 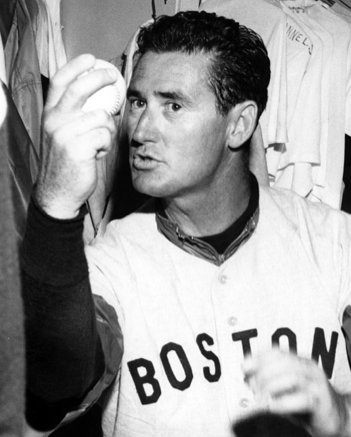 Before the May 6, 1947, game at Sportsman’s Park began, St. Louis Browns starting pitcher Jack Kramer talked about Red Sox left fielder (and reigning American League MVP) Ted Williams. He “casually remarked that the only way to pitch to Ted if a run meant the ball game is to walk him.”1 He might have benefited by remembering his own advice.

It was early in the season. The hosting St. Louis Browns were 6-9; the visiting Boston Red Sox were 8-8. Kramer had half of the Browns’ victories to date; he was already 3-0. The right-hander had begun his career back in 1939.

Manager Muddy Ruel’s Browns had lost both games of a Sunday doubleheader to the Red Sox on May 4. Both teams had a day off before resuming the series on Tuesday.

With two outs and a 3-and-0 count in the first inning, Williams took a called strike and then singled hard off Kramer into center field – despite a defensive shift that saw three infielders on the right side. Williams was able to take second on an error by center fielder Paul Lehner. But Kramer wheeled and picked him off second base, ending the inning.

The Browns were no doubt pleased to take a 2-0 lead in the bottom of the first. Working the mound for the Red Sox was left-hander Mel Parnell, a 25-year-old rookie making just his fourth major-league start. He was 1-1 so far. Parnell got two outs but then walked shortstop Vern Stephens and left fielder Jeff Heath. First baseman Jerry Witte tripled to right-center and the Browns had their lead. The inning ended when right fielder Sam Mele made a spectacular leaping catch of Wally Judnich’s deep fly ball at the wall.

The Red Sox responded right away, though, and tied the score in the top of the second. Center fielder Dom DiMaggio led off by drawing a base on balls. Second baseman Bobby Doerr doubled to left field and DiMaggio scored. Mele hit a fly ball that went about 380 feet, deep enough to left that Doerr easily tagged and ran to third base.

It was so early that the game definitely wasn’t on the line, but the Red Sox’ Rudy York was a dangerous hitter. The Browns intentionally walked York so that Kramer could take his chances against catcher Roy Partee. Partee drew a walk, loading the bases with one out for Parnell.

Parnell grounded a slow roller to second base. Billy Hitchcock fielded the ball and threw to first, but Doerr scored and it was 2-2. Shortstop Eddie Pellagrini flied out to center field.

Parnell walked Hitchcock, the first batter up in the bottom of the second, but he was the only batter from either team to get to first base in either that inning or the top of the third. Kramer struck out Williams in the third.

Lehner singled to lead off the bottom of the third. He got to second on Vern Stephens’s groundout, but no farther.

Over the next three innings, the only batter to reach base off Kramer was York, on a two-out single in the fourth; he was thrown out trying for two bases.

Parnell gave up a fourth-inning single to catcher Les Moss. He gave up two singles in the fifth, one to third baseman Bob Dillinger and the other to Vern Stephens, but both were left stranded.

Doerr singled to lead off the seventh but was forced out at second when Leon Culberson (who had replaced Mele after the Browns right fielder developed a sore back) hit a grounder to Dillinger at third.2 York then hit into a 6-4-3 double play. The score remained tied.

In the bottom of the seventh, the Browns edged ahead. It was Kramer who scored the go-ahead run. He walked to lead off the inning. Dillinger singled past Pesky, who was playing in close, anticipating a bunt; Kramer moved up to second.3 Lehner got an infield hit, loading the bases with none out.

Red Sox manager Joe Cronin had Fritz Dorish relieve Parnell. Vern Stephens hit a fly ball to left and Kramer tagged up and scored the go-ahead run. Dorish got Heath to ground out to first base unassisted and Witte to fly out. With just two innings to go, the Browns held a 3-2 lead.

In the top of the eighth, Kramer faced a pair of pinch-hitters: Wally Moses (batting for Partee) and Billy Goodman (batting for Dorish). Neither got on base, nor did Pellagrini.

Bob Klinger was the new pitcher for the Red Sox in the ninth. He retired the three batters he faced.

Three outs from victory, Kramer retired Pesky to start the ninth. Ted Williams batted with one out and the Red Sox trailing by one run.

Notwithstanding his pregame comments about the wisdom of working around Williams when the game was “on the line,” Kramer threw a pitch that was “a bit too sweet. … [Williams swung and the ball] sailed on a line, crashing against the metal of the light standards above the pavilion in right-center.”4 The 400-foot drive “caromed off a steel girder” and tied the game.

DiMaggio and Doerr both made outs to end the inning.5 Lehner tripled off Klinger with two outs in the bottom of the ninth but Stephens made the final out and the game went into the 10th.

With two outs and a runner on second in the top of the 10th, Rip Russell pinch-hit for Klinger but grounded out.

Earl Johnson came in from the bullpen to pitch for Boston in the bottom of the inning. He got two outs but then right fielder Wally Judnich singled to right and ran to third base on Hitchcock’s single to left. With Kramer due up next, Johnson walked Moss intentionally. Johnny Berardino pinch-hit for Kramer and struck out on a contested called third strike.

Fred Sanford was Kramer’s replacement on the mound in the 11th. Pellagrini doubled off the bleacher wall in left-center and Johnny Pesky walked.

This brought up Ted Williams. Walk him to load the bases, with nobody out? No, Sanford pitched to him. Williams laid off the first pitch, a ball. Then he saw a pitch to his liking. Williams “unloaded. He gave it a terrific ride. It cleared the ten-foot high screen at the back of the right-field pavilion. It crossed Grand st. in back of the pavilion … a three-run smash.”6 The Herald writer said, “We could see it bound up to the third story of a house on the other side of the boulevard, and conservative estimates of its penetration, on level ground, would be 475 feet.”7

The score was suddenly 6-3, Red Sox. Sanford composed himself, retiring DiMaggio, Doerr, and York, with only Culberson getting anything off him – a two-out single.

Every run produced by Williams’s three-run homer was needed. Johnson walked the leadoff batter in the bottom of the 11th, Dillinger. He got Lehner and Stephens both to make outs, but then gave up a two-run homer to Jeff Heath, a drive over the roof of the right-field pavilion. Only after he struck out Witte was the game complete. It was, wrote Stockton, “very much a Ted Williams victory, 6 to 5.”8

Johnson got the win, of course, improving to 1-1 in the young season. Sanford fell to 0-1.

In addition to the sources cited in the Notes, the author consulted Baseball-Reference.com, Retrosheet.org, and Nowlin, Bill, 521 – The Story of Ted Williams’ Home Runs (Cambridge, Massachusetts, 2013). Thanks to Carl Reichers for supplying the St. Louis Post-Dispatch story.

2 Mele’s back had flared after his first-inning catch. He had hurt it due to laughing so hard the night before when roommate Dom DiMaggio had his bed fall on him.” Burt Whitman, “Williams 2 Homers Win, 6-5,” Boston Herald, May 7, 1947: 1, 29.