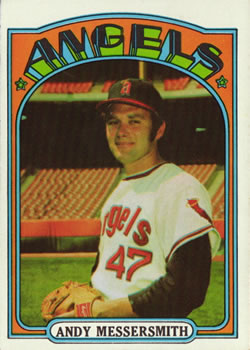 Pitcher Andy Messersmith made a deep impact on the Angels’ record book during his five seasons with the team. While some fans might remember him as a Los Angeles Dodger or a free-agent signing with the Atlanta Braves, Messersmith began his career in the majors as an Angel from 1968 to 1972. At the start of the 2022 season, Messersmith still ranked among the Angels’ top 10 career leaders in earned-run average, complete games, shutouts, and fewest hits per 9 innings. He also remained among the franchise’s single-season leaders in wins, ERA, innings pitched, and several other categories.1

The California-raised righty2 holds another unique niche in Angels history, though it isn’t directly credited to him in the team’s record books. On May 6, 1972, Messersmith wrapped up a masterful two-hit shutout of the Milwaukee Brewers in 1 hour and 31 minutes. A half-century later, that remained the fastest nine-inning game in Angels history – and the shortest in the Brewers’ annals, as well.3

The game matched Messersmith against a team he had beaten regularly since its inception as the Seattle Pilots in 1969. The pitcher had made 11 previous appearances against the Pilots and Brewers, all but one of them starts. Messersmith owned a 6-2 record against the franchise and an ERA of just over 2.00. Most notably, Messersmith started the Brewers’ first game in Milwaukee, on April 7, 1970, handcuffing the team on four hits as California cruised to a 12-0 victory. He also pitched a three-hitter in a 4-2 triumph over the Pilots in Seattle on September 14, 1969.

The May 6 game was Messersmith’s fifth appearance of the strike-delayed 1972 season, and he entered with a 1-3 record and a 4.40 ERA. On April 15 he’d spoiled the first game of another brand-new franchise, beating the Texas Rangers 1-0 in their debut after they moved from Washington. Bothered by tendinitis in the middle finger of his pitching hand,4 he performed less effectively in subsequent starts, surrendering six runs to the Baltimore Orioles in his previous game, on April 29.

Opposing Messersmith was a California-bred righty trying to turn around his career. Jim Lonborg was newly arrived from Boston, where he’d won the 1967 AL Cy Young Award and been named the AL Pitcher of the Year by The Sporting News. Subsequent injuries to his left knee and right shoulder kept him from returning to his 1967 stardom, and the Red Sox dealt him to Milwaukee as part of a 10-player deal in October 1971. The May 6 game was Lonborg’s first start for the Brewers. He had made two previous appearances out of the bullpen, working 6⅔ innings with no record and a 1.35 ERA.

Both teams entered the game in last place in their divisions, though that didn’t mean much so early in the season. First-year manager Del Rice’s Angels had a 6-9 record and sat five games behind Minnesota in the AL West. Dave Bristol’s Brewers were 3-9, but only 4½ games behind Baltimore in the AL East. Milwaukee was struggling with the bat, bringing a team batting average of .166 into the game.5 In their previous two games, the Brewers had collected a total of seven hits in back-to-back shutout losses, with Minnesota’s Bert Blyleven and California’s Nolan Ryan doing the honors.

The Angels’ lineup included most of their regular starters, with a few exceptions. Veteran Andy Kosco started in right field, a position usually manned by Leroy Stanton. Bob Oliver, California’s most frequent first baseman in 1972, had been acquired the day before in a trade with Kansas City; Jim Spencer started at first. The catcher’s spot was a revolving door for the ’72 Angels, with Art Kusnyer, Jeff Torborg, and John Stephenson seeing roughly equal time. Torborg got the start this game.

The Brewers’ lineup included a few unusual variations as well. George Scott, an eight-time Gold Glover at first base, started at third base, a position most frequently filled by Mike Ferraro. Scott played 23 games at third in 1972 and 219 over his 14-year career. John Briggs, usually Milwaukee’s left fielder, took over at first, while Joe Lahoud, usually in right field, played left. Billy Conigliaro started in right field. (Scott, Lahoud, and Conigliaro had all come to the Brewers from Boston in the Lonborg trade.)

The crowd of 19,440 on Little League Night6 at Anaheim Stadium saw Messersmith come out smoking, striking out center fielder Dave May, second baseman Ron Theobald, and Scott to start the game. Messersmith added a fourth strikeout, of Lahoud, in the second inning. The only speed bump came from eighth-place hitter Rick Auerbach, Milwaukee’s shortstop. Auerbach, who entered the game hitting .093, singled in the third inning on a hard one-hopper past shortstop Leo Cardenas.7 Auerbach reached second on an error by Spencer but advanced no farther.

Third baseman Ken McMullen collected California’s first hit in the third, but the Angels could not cash in. They had better luck in the fourth. With one out, left fielder Vada Pinson reached when Theobald bobbled his grounder.8 Back-to-back singles by Kosco and Spencer brought Pinson home for a 1-0 California lead. Lonborg intentionally walked Cardenas to load the bases, then retired McMullen and Torborg to stifle the rally.

The fifth and the top of the sixth passed without offensive outbursts. In the bottom of the sixth, Pinson drove a pitch over the right-field wall9 for his second homer of the season, giving the Angels a 2-0 advantage.

Lonborg and Messersmith continued to swap zeroes from there. Messersmith struck out Conigliaro and pinch-hitter Brock Davis to wrap up the Brewers’ eighth. Davis hit for starting catcher Ellie Rodriguez, and Bristol sent in 20-year-old prospect Darrell Porter to catch the rest of the game. After 22 games with Milwaukee in September 1971, Porter had made the 1972 Brewers out of spring training but appeared just 18 times and hit .125 before being farmed out to Triple-A Evansville in late May.

The Angels’ half of the eighth was marked by drama, though not by scoring. With one out, Lonborg hit Berry with a pitch. Pinson followed with a grounder to the right side that was ruled to have hit Berry on his way to second base. Berry was called out, while Pinson was credited with a single. Rice argued that the ball had not hit Berry, claiming that it had not deflected or changed direction.10 First-base umpire George Maloney ejected Rice.

In his only season as a big-league manager, Rice led the AL with six ejections; this was his first. The same umpiring crew accounted for half of those banishments, as Maloney’s crewmates Merle Anthony and Larry Napp ran Rice from games on August 2 and August 12, respectively. (The 1972 season was a relatively quiet one for some of the AL’s firebrand managers, as Baltimore’s Earl Weaver was thumbed just four times and Detroit’s Billy Martin only twice. Oakland’s Dick Williams and Boston’s Eddie Kasko finished just behind Rice with five ejections apiece.)

The pesky Auerbach led off the ninth by lining a single to left. He was the only Brewer to reach base: Messersmith issued no walks and did not hit a batter, and the error by Spencer did not allow the batter to reach.11 Bill Voss pinch-hit for Lonborg and flied out. May grounded to second base, advancing Auerbach. Paul Ratliff, in the last of his four major-league seasons, batted for Theobald. Messersmith retired him on a chopper that Torborg fielded and threw to Spencer to end the game.

Messersmith had established a club record with no time to spare, beating the Angels’ previous fastest nine-inning game by just one minute. The team set its previous record of 1 hour and 32 minutes on July 16, 1962, in a 4-2 loss to the Washington Senators. The Pilots/Brewers franchise’s previous record had been 1 hour and 34 minutes, set in a 1-0 victory over the Chicago White Sox in Milwaukee on July 7, 1970. Center fielder May was the only Brewer who started both games.

Messersmith said he relied heavily on fastballs and changeups, abandoning his slider in the fifth inning when his finger started to hurt.12 “One of the other guys said he had a date at 10:30,” the pitcher quipped.13 Messersmith called his outing “probably the best game I’ve ever pitched,” especially since he hadn’t walked anyone.14

Messersmith’s finger problems eventually led to surgery, and he slipped from 20 wins in 1971 to eight in 1972. In late November, the Angels traded him and McMullen to the Dodgers for five players, including Frank Robinson. He went on to win 53 games in three seasons with the Dodgers, including a 20-win season for the 1974 National League champions.

With the Brewers mired in last place at 10-20, Bristol lost his job in late May; the team finished last in the AL East. The Angels finished in fifth at 75-80, and Rice was fired about a week after the season ended.15

In addition to the specific sources cited in the Notes, the author used the Baseball-Reference.com and Retrosheet.org websites for general player, team and season data and the box scores for this game. Eric Golanty’s SABR Biography Project article on Andy Messersmith was also a primary source.

Image of 1972 Topps card downloaded from the Trading Card Database.

2 Messersmith was born in Toms River, New Jersey, but moved to California at age 5. He graduated from high school in Anaheim and attended the University of California at Berkeley.

3 2021 Angels media guide: 294. The 2021 Brewers media guide does not list the shortest or fastest nine-inning game in team history. SABR member Chris Zantow, author of Building the Brewers: Bud Selig and the Return of Major League Baseball to Milwaukee, identified the game in 2019 as the shortest in Brewers history, and a search of Retrosheet game logs for the Brewers found no shorter games in subsequent seasons. Chriszantowauthor.com, “This Date in Brewers History – Milwaukee’s Shortest Nine-Inning Game,” posted May 6, 2019, and accessed online October 12, 2021. https://chriszantowauthor.com/2019/05/06/this-date-in-brewers-history-milwaukees-shortest-nine-inning-game/.

7 Pete Boal, “Angels Beat Brewers, 2-0,” San Bernardino (California) County Sun, May 7, 1972: F1. Other game accounts indicate Cardenas got his glove on the ball but could not hold it. None of the game accounts suggested that the ball should have been scored an error.

11 Available game accounts do not specifically describe the play, but Baseball-Reference and Retrosheet agree that the batter (Lonborg) did not reach base. Baseball-Reference says Lonborg was retired on a fly to first base, but Auerbach reached second on an error by Spencer. Some possibilities: Spencer might have caught a pop fly or short fly ball and then thrown wildly to second. Or, he might have held the ball long enough to register the out and then dropped it, allowing Auerbach to advance. Either way, Auerbach went no farther.

13 Boal. Merry credited Messersmith with a slightly different version of the quote: “It’s not true that I had a 10:30 date.”

14 Distel. Messersmith went on to pitch a one-hitter in June 1976 for the Atlanta Braves, walking one batter. He also pitched three other two-hit complete games, but walked five, six, and six hitters in those games.