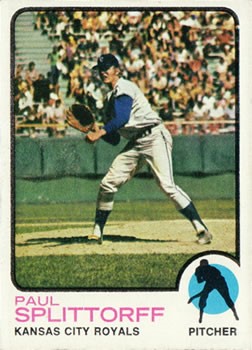 On September 23, 1970, Paul Splittorff,1 a star in Chicago-area American Legion baseball in his teenage years, pitched his first major-league game for the Kansas City Royals against the Chicago White Sox at White Sox Park. It wasn’t a dream debut for the local kid: Splittorff gave up five runs in seven innings and took the loss in a 6-0 defeat.

Three years later to the week, the bookish-looking left-hander with the high leg kick returned to Chicago’s American League ballpark. This time, he made a start for the record books. In a 6-2 victory, Splittorff became the first Royals pitcher to win 20 games in a season, achieving the feat in the franchise’s fifth season.2

It seems fitting in retrospect that Splittorff would claim this permanent place in team lore. Splittorff started the first game in the history of the Royals organization, pitching the season opener for the Corning (New York) Royals of the New York-Penn League in 1968.3 He jumped from Class A in his first season to Triple A in his second and third. Despite a low-profile beginning as a 25th-round draft pick out of Morningside College in Sioux City, Iowa, Splittorff became the first of Kansas City’s 48 players signed from the 1968 draft to make it to the Royals.

Splittorff struggled in 1972 as he tried unsuccessfully to add a slider to his repertoire. Refocusing on control of his core pitches in 1973 gave him the key to a breakthrough. He threw a five-hit, complete-game win in the first game at Royals Stadium (now Kauffman Stadium) and had a 12-5 record at the All-Star break. Going into his September 26 start—his last game of the season—Splittorff boasted a 19-11 record and a 4.04 ERA.

Paralleling Splittorff’s rise, the Royals had coalesced into a contender under the guidance of manager Jack McKeon. Kansas City entered the September 26 game in second place in the American League West with an 86-71 record, 5½ games behind Oakland. For comparison’s sake, a year earlier on the same date, the Royals stood in fourth place with a 72-74 record, 14½ games from first. The Sporting News credited McKeon’s adroit touch with his players, as well as the emergence of a strong bullpen, for the team’s improvement.4

The White Sox had regressed after a powerful 1972 campaign. Going into the game, Chicago stood in fifth place in the AL West with a 75-82 record, 16½ games out. A year earlier on the same date, the White Sox had been in second place with an 83-63 record, just 3½ games back. In 1973 the team held first place as late as June 29, but injuries derailed the season, particularly the long-term absences of first baseman Dick Allen and outfielder Ken Henderson.5

To oppose Splittorff, the White Sox sent former AL Rookie of the Year Stan Bahnsen to the mound. While Splittorff aimed to win 20, Bahnsen had already lost that many, bringing a record of 18-20 and an ERA of 3.49 into the game. With less than a week of play remaining in the season, the September 26 game was also Bahnsen’s last appearance of 1973.

Befitting an end-of-season matchup, both lineups included many youngsters. Future Hall of Famer George Brett started at third base for Kansas City in his 10th major-league game. He came into the game hitting .080, and his third-inning single was only the third hit of his career. Royals right fielder Tom Poquette and second baseman Frank White were also rookies, while left fielder Jim Wohlford saw his first significant action in 1973 after a cup of coffee the season before.

On the Chicago side, shortstop Bucky Dent, first baseman Jerry Hairston, and right fielder Brian Downing were all first-year players, as were eventual pinch-hitters Bill Sharp and Sam Ewing. Apparently underwhelmed by the up-and-coming talent on display, only 5,570 fans turned out for the Wednesday night game. Splittorff’s parents were among them.6

The Royals handed Splittorff a lead in the first. Shortstop Freddie Patek led off with a single, stayed at first on a Brett fly out, and moved to second on a grounder. First baseman John Mayberry walked. Designated hitter Hal McRae, in his first of 15 seasons with the Royals, doubled over Chicago center fielder Buddy Bradford’s head for a quick 2-0 advantage.7

The White Sox responded with their own two-out rally in the bottom half. Left fielder Johnnie Jeter led off with a single. Two outs later, third baseman Bill Melton walked, and designated hitter Carlos May singled Jeter home. Splittorff got Bradford to ground back to the mound to hold the score at 2-1.

Chicago gambled in the second inning as Downing singled, then tried to score on light-hitting catcher Ed Brinkman’s double. A relay from Wohlford to Patek to catcher Buck Martinez retired Downing at the plate. The Royals mounted a small rally in the third on a Brett single and a walk to Mayberry, but also could not score.

Retrosheet’s game summary begins the fourth with the unusual notation, “Kirkpatrick doubled to pitcher.” Center fielder Ed Kirkpatrick’s line drive through the box bounced off Bahnsen and caromed into left field, and Kirkpatrick reached second before the White Sox could corral the ball. Staying in the game, Bahnsen wild-pitched Kirkpatrick to third. From there he scored on Poquette’s fly ball, caught by shortstop Dent in foul ground along the left-field line near the Chicago bullpen.8 Martinez doubled later in the inning but White could not drive him in, leaving the score at 3-1, Royals.

Mayberry widened the that margin in the fifth, hitting his 26th home run to center field to make the score 4-1. Playing his final game of 1973, he reached the 100-RBI milestone for the second straight season.

The White Sox fought to close the gap in the sixth. Melton singled, and White dropped Patek’s throw to second on Bradford’s grounder.9 A single by Luis Alvarado made the score 4-2. But the Royals answered right back in the seventh, when a single and stolen base by Patek and a triple by Wohlford into the right-field corner boosted Kansas City’s lead to 5-2.10 After completing the inning by inducing a double play, Splittorff left the game. He had surrendered seven hits and two runs, one earned, over six innings.

Another rookie, righty Doug Bird, took over pitching duties for Kansas City and set the White Sox down in order in the seventh and eighth. The Royals chipped out a sixth run in the ninth on a single by Martinez, a sacrifice bunt, and a single by Wohlford. Bahnsen got the hook after Wohlford’s two-out hit. Ken Frailing replaced him and got the final out by striking out Mayberry. Bahnsen yielded 11 hits and six runs, all earned, in 8⅔ innings.

The White Sox threatened in the ninth. Sharp, pinch-hitting for Bradford, was hit by a pitch. Orta, pinch-hitting for Alvarado, drew a walk. One out later, replacement right fielder Pat Kelly walked, loading the bases with one out. Jeter grounded to Patek at short, who ranged to his left to start a game-ending 6-4-3 double play.11

After 2 hours and 21 minutes of play, Splittorff was officially the Royals’ first 20-game winner, capping his season by winning his final five starts. He had won all five of his 1973 starts against the White Sox. “There are pitchers in the league with better stuff, better fastballs and curves,” McKeon said. “But none with a better attitude. He made himself a 20-game winner by working. Just like any other good man at his trade, Split works to be good.”12

Bird earned his 19th save, while Bahnsen’s record dropped to 18-21. The win brought the Royals’ record at White Sox Park to 8-0, though they lost their final game of 1973 in Chicago the following day, 3-2, before just 1,729 fans. Also on September 26, Jim Colborn became the Milwaukee Brewers’ first 20-game winner, while Minnesota’s Bert Blyleven became the first 20-game winner from the Netherlands.13

Splittorff never won 20 games again, though he came close, winning 19 in 1978. As of 2020, only Steve Busby, Dennis Leonard, Bret Saberhagen, and Mark Gubicza had joined him in winning 20 games in a season while pitching for the Royals.

In addition to the specific sources cited in the Notes, the author used the Baseball-Reference.com and Retrosheet.org websites for general player, team and season data and the box scores for this game. John DiFonzo’s SABR Biography Project profile of Splittorff provided extensive information on the pitcher.

Image of 1973 Topps card #48 downloaded from the Trading Card Database.

1 Splittorff graduated from high school in Arlington Heights, Illinois, where he starred in basketball in addition to baseball.

2 Kansas City newspapers noted that Splittorff was also the first pitcher in Kansas City’s major-league history to win 20 games, as no hurler in the 13-year history of the Kansas City Athletics had managed to do so. The articles made no consideration of Gene Packard and Nick Cullop, who managed the feat for the 1914-1915 Kansas City Packers of the Federal League. Also, Bullet Rogan won 18 games in 1924 and 1925 for the Kansas City Monarchs of the Negro League in short seasons of 79 and 88 games, respectively.

3 The Corning Royals began play one year earlier than their major-league parent club. The American League’s other 1969 expansion team, the Seattle Pilots, also fielded a 1968 team in the New York-Penn League, the Newark (New York) Co-Pilots.