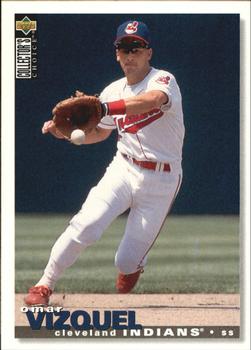 On August 25, 1995, the American League gave the Cleveland Indians permission to print playoff tickets.1 Leading the AL’s Central Division by 18½ games, the Indians were headed to the postseason for the first time in 41 years. Cleveland celebrated by sweeping a three-game weekend series at home against the Detroit Tigers.

The Indians visited Detroit seven days later for a four-game Labor Day weekend series. The Tigers, in Sparky Anderson’s final year as manager, were last in the AL East. Cleveland won the opener on September 1, 14-4, extending its winning streak to nine games. Detroit ended Cleveland’s streak the next day with a 3-2 win.

The Tigers were annoyed with Omar Vizquel. They accused Cleveland’s shortstop of trying to show up Cecil Fielder in each of the first two games. In Friday’s game they claimed he “lollypopped” his throw to first to get the slow-running Fielder.2 On Saturday, with a runner at first and two outs, Fielder hit a groundball to short. Vizquel, instead of tossing to second for an easy force play, delayed before throwing to first for the out.3

Vizquel denied intentionally trying to embarrass Fielder on Friday, saying, “I knew who was running. I never throw the ball hard if I don’t have to. I don’t want to risk throwing it away.” Regarding Saturday’s play, he noted that second baseman Carlos Baerga was slow covering the base and he had to wait until second-base umpire Ken Kaiser ducked before throwing to first.4

A large contingent of Indians fans, making the three-hour drive from Cleveland on I-90 west to I-75 north, were among the 25,393 spectators attending Sunday afternoon’s game on September 3.5 It didn’t take the Indians long to give their fans something to cheer about. Leading off the top of the first inning, Kenny Lofton reached on a fielding error by first baseman Tony Clark, who was making his major-league debut. Lofton stole second. Vizquel walked. Baerga singled, scoring Lofton, with Vizquel holding at second. Both runners scored on Albert Belle’s 44th double of the season, giving Cleveland a 3-0 lead.

Eddie Murray grounded out to first, moving Belle to third. Belle scored the fourth run of the inning on Jim Thome’s single to right. After a wild pitch and a hit batsman, Tigers starter Sean Bergman was relieved by Ben Blomdahl, who retired the Indians on Herbert Perry’s groundball double play.

Cleveland starter Albie Lopez held Detroit scoreless through the first three innings, retiring all nine batters he faced, and the Indians added a run in the third inning. Thome walked with two outs and took third on Manny Ramirez’s double to right field. Perry’s infield single to the hole between short and third scored Thome, increasing Cleveland’s advantage to 5-0.

Chad Curtis became the Tigers’ first baserunner when he walked to start the bottom of the fourth. Travis Fryman’s one-out single to left put runners at first and second for Fielder. The Tigers cleanup hitter connected on his 28th home run of the season, cutting the deficit to 5-3. His blast to deep left field was his first home run against the Indians in 74 at-bats during 1994 and 1995. Fielder had been 11-for-73 (.151) against Cleveland during this period, with only three RBIs, before hitting his three-run homer.6

Leading off the top of the fifth, Belle answered Fielder’s homer with a shot to deep right for his 35th home run of the season.7 The score remained 6-3 through seven innings.

With one out in the top of the eighth, Perry singled on a slow roller to third and scored on a double by Tony Peña to deep left-center field. Brian Bohanon came in to pitch and retired Lofton on a grounder to short, with Peña advancing to third. Vizquel’s double drove in the second run of the inning for an 8-3 Cleveland advantage.

Detroit got one of the runs back when Phil Nevin led off the bottom of the eighth with a line drive into the seats in deep right. It was the first career home run for the 24-year-old Nevin, selected first overall in the June 1992 draft by the Houston Astros and traded to the Tigers on August 15 for reliever Mike Henneman. Lopez hit the next batter, but struck out pinch-hitter Franklin Stubbs. Curtis singled to right, and Julian Tavarez relieved with runners at first and second. He struck out Chris Gomez, but walked Fryman to load the bases. Fielder ended the Tigers threat by grounding to third for the final out of the inning, with the Indians leading 8-4.

The Indians did not score in their half of the ninth. Tavarez remained on the mound as the Tigers came to bat, down by four runs at 8-4. Clark singled to lead off the inning, advanced to second on a groundout to first, and took third on a passed ball on an 0-and-2 pitch to Nevin, who eventually walked. Tavarez walked Milt Cuyler on four pitches to load the bases, and was relieved by Jose Mesa.

Mesa had converted 38 saves in 38 chances to set a major-league record for consecutive saves in a season.8 The streak was broken on August 25 when he gave up a ninth-inning solo homer to Detroit’s Curtis, tying a game the Indians eventually won in extra innings.

Usually relieving at the start of the ninth inning in save situations, Mesa hadn’t come in with the bases loaded all season.9 The first batter he faced was reserve catcher Ron Tingley, who entered the game after the starting catcher, John Flaherty, had been removed for a pinch hitter in the eighth. With the count 0-and-1, Tingley sliced a fastball 330 feet into the right-field lower deck for a home run, tying the score at 8-8. “I just happened to get the bat head out and hit it,” said Tingley, a lifetime .196 hitter, describing his first big-league grand slam.10

After Tingley’s slam, singles by Curtis and Gomez put Tigers on first and third. Fryman was intentionally walked, loading the bases. Fielder grounded a 3-and-2 pitch to Thome at third, who threw to Baerga at second. He avoided the hard-sliding Fryman and made the throw to first for an inning-ending double play. “I know he’s coming down to try and kill me to get the winning run home,” said Baerga. “I’d do the same thing.”11

Asked after the game about his decision to walk Fryman with Fielder on deck, Cleveland manager Mike Hargrove said, “Cecil doesn’t run well. I knew if he hit a ball anywhere on the ground, we’d have a chance to turn two.”12

The game moved to extra innings. Ramirez started the top of the 10th with a double off Joe Boever, Detroit’s seventh pitcher of the game. Wayne Kirby ran for Ramirez. Perry’s sacrifice moved Kirby to third. Sandy Alomar pinch-hit for Peña and flied out to center, with Kirby holding at third.

Lofton was intentionally walked to pitch to Vizquel. Behind in the count 1-and-2, the Cleveland shortstop slapped the next pitch into left field for a single, scoring Kirby to put the Indians ahead, 9-8. “He had thrown me a couple of nasty palm balls or curve balls or whatever it is that he throws,” said Vizquel of his hit off Boever. “At that point, all I wanted to do was get the bat on the ball.”13

Mesa stayed in the game to pitch the bottom of the 10th. The first two Tigers batters, Clark and Bobby Higginson, singled. With runners at first and second, Nevin struck out. Juan Samuel hit a grounder deep in the hole between short and third. Vizquel made a backhanded stop and jumped in the air to make the throw to second. Baerga’s relay to first completed the game-ending double play.

“It was kind of tough to get to the ball,” Vizquel said of the play that sealed Cleveland’s 9-8 win, “but once I did and threw it over to Carlos, he did the rest.”14

Baerga said of his teammate, “Omar can do anything in the field.”16

Cleveland won its first pennant since 1954 by sweeping the Boston Red Sox in the Division Series (3-0) and defeating the Seattle Mariners in the League Championship Series (4-2). The Atlanta Braves beat the Indians in the World Series (4-2).

After his two blown saves against the Tigers, Mesa recorded eight straight saves to finish the season with 46, tops in the big leagues. He added another two saves in the postseason and was the winning pitcher in Game Three of the World Series, hurling three scoreless innings in Cleveland’s 7-6 extra-inning victory, the first World Series game won by the Indians since 1948.

2 Paul Dickson in the Dickson Baseball Dictionary (New York: Facts on File, 1989), 248, describes a lollipop or lollypop as “a soft hit or weak throw.”

7 This was Belle’s second home run of the series. He would hit 15 more in September. His 17 homers for the month matched Babe Ruth’s 1927 record for the number of home runs hit in September. In addition to Belle’s major-league-leading total of 50 homers, he hit 52 doubles, the only player to reach both milestones in a season.