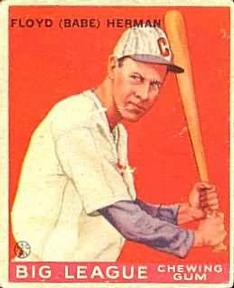 By September 30, the next-to-last day of the regular season in 1933, the teams playing in that season’s World Series, the Washington Senators and New York Giants, had already clinched their respective league pennants.1 However, there were still tight races for second and third places in the National League. The Pittsburgh Pirates held a one-game advantage over the Chicago Cubs for second, with two games left for each. The Cubs were only 1½ games above the fourth-place St. Louis Cardinals.

The Cardinals had been off since September 25, when they had beaten the Pirates. According to the St. Louis Star and Times, the Cardinals had the week off, but their secretary, Clarence F. Lloyd, “rigged up a couple of exhibition games … just to break the monotony … and to raise a few odd scheckles [sic] to be applied on the season’s rent.”2 The Cubs hadn’t played in almost a week, taking two of three games from the Cincinnati Reds on September 23-24. They did not schedule any exhibition games in the ensuing week, but the Chicago Tribune reported, “Just to make sure they will not forget they are employed, Manager Grimm has ordered them to assemble for workouts.”3

A two-game Chicago-St. Louis series would complete each club’s season. At stake was “third place [W]orld [S]eries money.”4 In addition, both teams were playing for momentum going into the offseason. The Cubs had played in the World Series in 1929 and 1932, but were now trying to hang onto a top-three finish in the NL. Their rivals, the Cardinals, had won the pennant and played in the fall classic in 1928, 1930, and 1931, but they finished in sixth place in 1932.

Dizzy Dean made the start for the home team. In just his second full season, the 23-year-old right-hander had already won 20 games and was leading the majors with 194 strikeouts. He had lost his two previous starts and had won just three of seven decisions against the Cubs. Veteran righty Guy Bush, 32 years old, started for Chicago. He was in search of win number 20 and had had very little success against St. Louis in 1933, winning only one of five decisions and allowing the Cardinals about five earned runs per game.

Approximately 3,500 spectators came out to watch the contest at Sportsman’s Park. How many remained to the game’s end is uncertain, especially when the Cubs sent 11 players into the batter’s box in the final frame to break open a game that had long been slipping from the Cardinals’ reach. Those who remained witnessed a bit of history, as Chicago’s Babe Herman stroked both a double and single in the ninth inning, completing his bid to hit for the cycle. This was his third career cycle, tying him with Bob Meusel5 as the only major-league players to hit for the cycle three times.

Chicago’s Woody English opened the game with a single to left field. He was forced on a grounder by Billy Herman. After Dean struck out Kiki Cuyler, Babe Herman – no relation to Billy – “slapped a fly to right against the screen just beyond [George] Watkins’ reach.”6 English scored easily and Herman stopped at third base with a triple. Riggs Stephenson singled, driving home Herman, and the Cubs led, 2-0.

Bush couldn’t protect the early lead, though. Pepper Martin led off the bottom of the first with a double to left. He moved to third on a groundout by Watkins and scored on Frankie Frisch’s RBI single to left-center.7 After Joe Medwick struck out, Frisch moved to second on a wild pitch and scored on a single by Ripper Collins, tying the game.

The Cubs put runners on base in the second, third, and fourth, but they could not score. Another opportunity came in the fifth, when Billy Herman stroked a leadoff double. Dean then walked Cuyler. After Babe Herman flied out to center, Stephenson grounded to shortstop Leo Durocher, who threw to Frisch at second to start a possible double play – but Frisch dropped the ball and the bases were suddenly loaded. Dean, however, made up for player-manager Frisch’s miscue. The Chicago Tribune reported that when Dean left the three runners on base by fanning both player-manager Charlie Grimm and Gabby Hartnett, “you should have heard the ladies day fans screech.”8

Meanwhile, Bush was economizing his pitching. After the rough start, he faced just three or four batters in every inning from the second through the sixth, shutting out St. Louis with no hits allowed.

In the top of the sixth, Billy Jurges reached on an error by Durocher and went to second on Bush’s sacrifice, English singled, plating Jurges, and Billy Herman stroked his second double, bringing English home for a 4-2 Chicago lead.

Cuyler fouled out for the second out, but then Babe Herman blasted his 16th home run of the season, well beyond the wall in right field. The two unearned runs gave the Cubs a 6-2 advantage.

Stephenson grounded out to Durocher for the third out. After he had been assailed by the Cubs for 10 hits and six runs, Dean “discovered that six innings were enough for one day.”9 The Cardinals were retired in order in the home half of the sixth, and Dean did not return to the mound to pitch the seventh. Instead, 42-year-old Dazzy Vance came on in relief. He set the Cubs batters down in order.

Bush was still cruising and finally yielded a single to Gene Moore in the bottom of the seventh, the first hit he allowed since the first inning, but St. Louis did not score. Hard-throwing southpaw Bill Hallahan became the third St. Louis pitcher and pitched a scoreless eighth inning for the Cardinals.

In the ninth inning, however, the Cubs blasted Hallahan for a “half dozen tallies.”10 Babe Herman led off with a double into the left-center gap – his third extra-base hit of the game. Stephenson singled him home for a 7-2 lead.

Grimm grounded a dribbler toward Hallahan, who, in his haste to get the out at first, threw the ball away. Stephenson scored from first and Grimm, credited with a single, ended up at third on the error. Hartnett launched a double to center, and Grimm trotted home with Chicago’s ninth run of the game.

Jurges and Bush were retired, but the Cubs’ offense picked up again. Four consecutive singles by English, Billy Herman, Cuyler, and Babe Herman resulted in three more runs. Stephenson hit a grounder to second and Babe was forced for the final out. Babe Herman had collected two hits in the inning, and accomplished the rare feat of hitting for the cycle.

The Cardinals went quietly in the ninth. Although Bob O’Farrell reached on an error, there was never any threat by the St. Louis offense. The Cubs had won, 12-2. Chicago batters had combined for 18 hits (every player had at least one hit), while Bush held the Cardinals to just five safeties (four singles and a double). The Chicago victory not only assured the Cubs of third place in the National League, it kept them in the running for the second spot, as the Pirates were idle, meaning Chicago was just a half-game behind Pittsburgh. But the Pirates swept the Cincinnati Reds in a final-day doubleheader, clinching second place. The Cubs had to be content with third-place money.

Dean suffered his 18th defeat of the season; however, as a consolation, he did increase his season strikeout total to 199.11 It was the second straight season in which Dean led the majors in fanning opposing batters. (He continued the streak, leading all pitchers in 1934 and 1935, too.) Bush earned his 20th victory of the season, the only time in 17 seasons in which he won 20 games. His 2.75 ERA was the lowest of his career.

Babe Herman had four hits in six trips to the plate, raising his average to .292. He had driven in four runs and scored three. More importantly, he now had hit for the cycle three times in his career. His feat marked the fourth time a player in Chicago franchise history had hit for the cycle, joining Jimmy Ryan (July 28, 1888, against the Detroit Wolverines, and July 1, 1891, against the Cleveland Spiders) and Hack Wilson (June 23, 1930, against the Philadelphia Phillies). A record eight batters hit for the cycle in 1933.12

The author wishes to thank Michael Haupert of SABR’s Business of Baseball Committee for sharing Schedule #5, which contains information about “Total Clubs’ and Leagues’ Shares” from the 1933 World Series income.

1 The Washington Senators met the New York Giants in the 1933 World Series, with New York winning in five games.

11 In their game recaps, both the Chicago Tribune and the St. Louis Post-Dispatch give Dean credit for 202 strikeouts in the season. However, both Baseball-Reference.com and Retrosheet.org list his season total as 199.