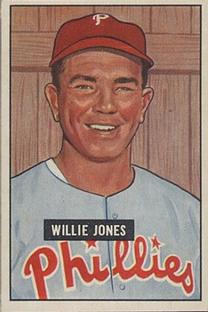 On September 4, 1949, the fourth-place Philadelphia Phillies and the third-place Boston Braves faced off in a Sunday doubleheader at Shibe Park in Philadelphia. The Braves were one year removed from winning the 1948 National League pennant and the Phillies were one year away from capturing the 1950 pennant.

On this day, however, the teams were playing out the string as also-rans behind the St. Louis Cardinals and the eventual pennant winners, the Brooklyn Dodgers. What transpired was a highly entertaining combination of unprecedented events, great performances by players both famous and obscure, starting pitchers who could not get anybody out, a come-from-behind walk-off home run, and two relief pitchers playing key roles in both games. Over two games lasting nearly five hours, the crowd of 28,0721 was treated to 32 runs and 49 hits, including eight home runs.

Let’s start with the unprecedented. The Phillies won both games of the doubleheader despite having their starting pitchers get a grand total of one out and despite falling behind by 4-0 in both games before they ever came to bat. In the first game, the Phillies’ Hank Borowy, well past his prime as one of the stars of the 1945 Cubs pennant winners, faced five batters and gave up two hits, two walks, and four runs. The only out he got was on a Sibby Sisti sacrifice bunt.

As bad as Borowy was, he outpitched Blix Donnelly, the Phillies’ starter in the second game. Donnelly gave up a walk and four hits, including an upper-deck home run by the Braves’ Bob Elliott, and was gone before he could retire one batter. To sum up: two games, two starting pitchers, 10 batters faced, one out recorded, six hits, three walks, one double, one home run, eight runs allowed.2

That the Phils came back to win both games was largely due to some excellent relief pitching from budding star Curt Simmons and journeyman Ken Trinkle. Simmons took over for Borowy in the first game and pitched 3⅔ innings without being charged with a run. He was right back on the mound in the second game, pitching four innings, giving up two runs, finishing the game, and getting the win. Meanwhile Trinkle pitched a scoreless ninth inning in the first game, picking up the win on a walk-off home run by Willie “Puddin’ Head” Jones. Trinkle then relieved Donnelly in the first inning of the second game and pitched five innings of one-run ball.

Behind 4-0 in the first game, the Phillies got one run back in the first inning on Granny Hamner’s home run to the bleachers in left off Braves starter Johnny Sain. The game remained 4-1 as Simmons and Sain traded scoreless innings in the second and third.

In the bottom of the fourth, the Phillies rallied to take the lead. Dick Sisler led off with a single, and after Del Ennis popped to third, Andy Seminick was hit by a pitch and Bill Nicholson walked. With the bases loaded, Jones singled to third base, Sisler scored Philadelphia’s second run of the game, and the bases remained loaded.

Mike Goliat grounded out, scoring Seminick. Buddy Blattner batted for Simmons and singled, scoring Jones and Nicholson. After Ashburn singled, sending Blattner to third, Bobby Hogue replaced Sain on the mound and got Hamner to ground out, ending the inning with the Phillies leading 5-4.

The lead was short-lived, however. Schoolboy Rowe replaced Simmons on the mound in the fifth and gave up a walk to Sisti, a single to Elbie Fletcher, a run-scoring fly ball to Pete Reiser, and a run-scoring double off the right-field wall to Jeff Heath, giving the Braves a one-run advantage.

Jim Konstanty replaced Rowe and served up a two-run home run to Tommy Holmes. Boston had a four-run rally and an 8-5 lead. Ennis got two runs back in the bottom of the inning when he followed a single by Sisler with a blast to the upper deck in left off Hogue.

The game remained 8-7, Braves going into the ninth. Trinkle replaced Konstanty on the mound for the Phillies and pitched a one-two-three top of the inning. Nels Potter, who had replaced Hogue in the seventh inning, got the first two Phillies batters out in the bottom of the ninth, but Nicholson doubled to right field, bringing Puddin’ Head Jones to the plate.

Jones launched a Potter offering deep into left field. As the crowd stood and roared and left fielder Heath drifted back to the wall, the ball barely cleared the screen in front of the bleachers to give the Phillies an unlikely walk-off victory. It was Jones’s 16th home run in his first full year in the big leagues. Trinkle earned his lone victory of the season.

With the crowd still buzzing as the second game started at about 4:30, the fans and the players all knew that the game would have to played crisply to be completed before the Commonwealth of Pennsylvania’s Sunday curfew of 7:00 P.M.3 The Phillies again found themselves quickly down 4-0. Trinkle replaced the ineffective Donnelly in the top of the first and prevented further damage.

The Phillies got one run back off Braves starter Vern Bickford in the first, when Ennis plated Hamner with a fly ball. They climbed within one run in the second on Richie Ashburn’s two-run single to right.

In the third, Trinkle allowed Boston’s only run in his six innings of work over two games, when he yielded an opposite-field home run to lefty Marv Rickert leading off the third inning. The Phillies got that run back in the bottom of the fifth on Goliat’s fly ball. After five innings, the score was Braves 5, Phillies 4.

The Phillies took the lead for good in the bottom of the sixth. Ashburn led off with a triple to the scoreboard in right-center, and Sisler’s smash over the right-field wall gave Philadelphia a 6-5 lead.

Red Barrett replaced Bickford on the mound for the Braves. One out later, Stan Lopata nearly hit one out to left but settled for a triple. He scored on Jones’s single. In the seventh, Connie Ryan’s home run off Simmons, who had replaced Trinkle an inning earlier, narrowed the Phillies’ lead to one, 7-6. The Phillies responded with a run in the seventh, when Sisler singled home Simmons, who had reached base on an errant throw from second baseman Ryan.

Simmons took a two-run lead into the ninth inning and was greeted by singles from Mickey Livingston and pinch-hitter Del Crandall. With runners on first and third, Simmons induced Sisti to ground into a 6-4-3 twin killing, Livingston scoring on the play. Ryan grounded out to second baseman Goliat to end the game: Phillies 8, Braves 7.

The doubleheader win completed a four-game series sweep by the improving Phillies, who moved past the fading Braves and into third place.4 The Phillies finished the year in third place, 16 games behind the pennant-winning Dodgers.

The twin bill featured several players who played key roles on the 1950 Phillies pennant winners. Simmons became an effective starting pitcher for the 1950 team, winning 17 and losing 8 before he was called up to the Army in early September. Rising stars Ashburn (who was 6-for-8 in the doubleheader), Ennis, Jones, Lopata, and Hamner combined with veterans Sisler and Seminick to form the nucleus of the 1950 team, dubbed the Whiz Kids. Konstanty became the cornerstone of the bullpen, winning the 1950 National League MVP Award.

There would be no pennant-winning season for Ken Trinkle, however. The 1949 season was his last in the major leagues. On May 1, 1950, the Phillies optioned Trinkle to their Toronto farm club in the International League. Trinkle, who had been a mainstay of the New York Giants bullpen from 1946-48, pitched three years in the minors before calling it quits.

The Braves suffered through a few lean years in Boston before moving in 1953 to Milwaukee, where players like Eddie Mathews and later Henry Aaron helped them steadily improve. By 1957, they were World Series champions, while in Philadelphia the Whiz Kids were graying and finishing fifth.

In addition to the Sources cited in the Notes, the author consulted the Baseball-Reference.com and Retrosheet.org websites for pertinent material and the box scores noted below; and game coverage in the Boston Globe and Philadelphia Inquirer.

2 No other National, American, or Federal League team between 1901 and the end of the 2020 season won both ends of a doubleheader when its starting pitchers combined to record no more than one out.

3 Pennsylvania law in 1949 forbade the start of an inning after 7 P.M. on Sundays.

4 The very next day, in the first game of a doubleheader against the Brooklyn Dodgers, the Braves again knocked out the starting pitcher after one-third of an inning and again lost the game.