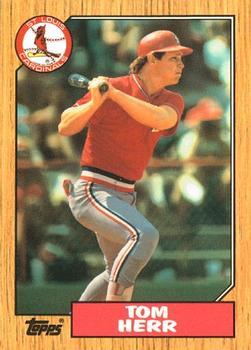 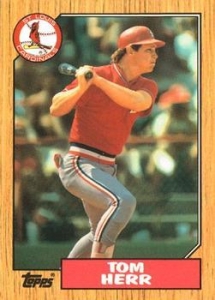 On April 18, 1987, it rained seat cushions at Busch Stadium, as Tommy Herr’s 10th inning walk-off grand slam gave the St. Louis Cardinals a 12-8 win over the New York Mets and sent Cardinals fans into a state of euphoria on “Seat Cushion” night. It was the only grand slam of Herr’s career, and the victory was an early step toward reclaiming the National League East in 1987.

The Cardinals had held off the Mets for the NL East title in 1985 before losing the World Series to the Kansas City Royals, but New York rolled into St. Louis in April 1986 and swept a four-game series, seizing an early edge in the division race that it never relinquished, on its way to a World Series championship.1

Nearly a year to the day after that sweep, the Cardinals got their first shot of 1987 at the Mets, hosting a three-game weekend series. St. Louis drew first blood with a 4-3 win on April 17, as Herr drove in three runs, including a two-run single in the fifth inning that put the Cardinals ahead to stay.2

With a crowd of 41,942 on hand for Saturday night’s second game of the series, Danny Cox took the mound for the Cardinals. The 27-year-old right-hander had won both of his previous starts in 1987. The Mets threatened right away, loading the bases with one out in the first on singles by Wally Backman and Keith Hernandez and a walk to Gary Carter.

New York was poised to take an early lead with Darryl Strawberry—who already had five home runs in the Mets’ first nine games—and high-profile trade acquisition Kevin McReynolds coming up, but Cox rose to the challenge. He retired Strawberry on a foul popup and McReynolds on a grounder to keep the game scoreless.

Opposing Cox was Mets right-hander Ron Darling. A top-five finisher in 1986’s NL Cy Young Award voting, Darling had a no-decision and a win in his two previous starts.

With Dwight Gooden in a drug rehabilitation program after testing positive for cocaine use, New York had gone with a four-man rotation of Darling, Bob Ojeda, Sid Fernandez, and Rick Aguilera. Two scheduled off-days gave each pitcher at least four days of rest for their first two starts of the season, but the Mets arrived in St. Louis in the middle of a stretch of nine games without a day off, reducing downtime to three days.

Nevertheless, Darling had expressed agreement with the arrangement. “I actually prefer it to four days between starts,” he said. “I always worked in a four-man rotation until I came to the Mets.”3 Like Cox, Darling faced baserunners right away. Ozzie Smith singled to center with one out and stole second. Herr walked, putting two runners on for Jack Clark, back after a thumb injury in June 1986 had sidelined him for the rest of the season. Clark hit a fly ball to deep left, but it stayed in the ballpark for McReynolds to catch. Darling struck out Willie McGee looking to end the inning.

Denied in the first inning, the Mets pushed across the game’s first run in the second. Rafael Santana singled to left and reached second on Darling’s sacrifice. Lenny Dykstra singled up the middle to bring Santana home for a 1-0 lead.

A two-out power display in the third expanded the lead. After retiring Hernandez and Carter, Cox gave up Strawberry’s double to right-center. McReynolds walked, bringing up Howard Johnson. With the count 1-and-1, Cox threw a fastball belt-high, and the switch-hitting Johnson smashed a 410-foot home run, well past the right-field wall, to make it 4-0, New York.4

The Mets tacked on another run in the fourth against reliever Pat Perry. Dykstra led off with a double and came around on fly balls by Backman and Hernandez.

Heading to the bottom of the fourth, Darling held a five-run lead and had retired eight Cardinals in a row, but St. Louis quickly grabbed the momentum.

Back-to-back singles by Herr and Clark opened the inning. McGee hit a hard grounder up the middle that Backman mishandled; it was scored a single, and Herr scored the Cardinals’ first run.

Jim Lindeman doubled to right-center field for St. Louis’ fourth hit in a row, driving in Clark and McGee to make it a 5-3 ballgame.

Pendleton’s groundout pushed Lindeman to third. Steve Lake—starting while Tony Peña recovered from a broken thumb—hit a chopper up the middle with the infield in. Backman gloved it and threw home, rather than taking the sure out at first. The throw was too low, and Lindeman scored the fourth run of the inning.5

The Cardinals were not done; Vince Coleman singled and Smith walked on four straight pitches to load the bases. Herr, batting for the second time in the inning, took four more balls in a row to knot the score, 5-5.

That would be it for Darling, as 24-year-old right-hander David Cone, acquired in a trade with the Kansas City Royals less than a month earlier, came into the game and struck out Clark for the third out.6

St. Louis went ahead against Cone in the sixth. Smith walked with two outs. Herr, reaching base for the fourth time in as many plate appearances, followed with an RBI double for a 6-5 lead.

Perry maintained the lead, retiring 12 Mets in a row until Strawberry led off the eighth with a single. Cardinals manager Whitey Herzog brought in relief ace Todd Worrell, who seemed to have the situation under control when McReynolds was retired on a fly out and Lake gunned down Strawberry attempting to steal second.

But Worrell lost his command, walking three straight Mets to load the bases. He escaped that jam by getting Dykstra to fly out to left, but walks to Backman and Hernandez to begin the ninth put St. Louis’s one-run lead in jeopardy again. With the heart of the Mets’ lineup coming up, Herzog summoned Bill Dawley from the bullpen.

Dawley got Carter to fly out to center, and Coleman made a leaping catch on Strawberry’s liner to left, putting the Cardinals one out from the win. McReynolds, however, delivered a game-tying single to make it 6-6.

With Hernandez at second, Howard Johnson singled to bring him in as the go-ahead run, but McReynolds was thrown out at home trying to extend the lead. While rounding the bases, McReynolds sprained his right foot and was assisted off the field.7

Mets manager Davey Johnson brought in Jesse Orosco in the ninth inning for the save. Orosco had saves in all three appearances so far in 1987; six months earlier, the left-hander had recorded two of the biggest outs in franchise history, clinching the NLCS and World Series.

But Orosco walked Smith to lead off the inning. Herr’s sacrifice moved Smith to second. With Clark batting, Smith broke for third. Carter’s throw was low and past the third-base bag, and Smith came around to score the tying run. The game went to extra innings, tied 7-7.

Rookie Al Pedrique, who had entered at short after the Mets pinch-hit for Santana in the eighth, led off the 10th with a walk off Dawley. After Dave Magadan bunted Pedrique to second, Herzog summoned lefty Dave LaPoint.

Pedrique moved up to third on Dykstra’s groundout, then scored the go-ahead run when LaPoint threw a wild pitch. The Mets again had the lead, 8-7.

Johnson stuck with Orosco to finish the game off in the bottom of the 10th, but Cardinals had other plans. With one out, Pendleton singled into right-center field off an Orosco slider. On the very next pitch, Lake ripped a single into left.

Herzog went to his bench: Tom Lawless ran for Lake, and rookie Tom Pagnozzi stepped in as a pinch-hitter for only his second major-league at-bat. Pagnozzi lined a first-pitch fastball to right for the Cardinals’ third hit in a row, and Pendleton hustled around third, beating Strawberry’s throw for the game-tying run.

Lawless and Pagnozzi moved up on Coleman’s grounder, and Ozzie Smith walked. The bases were loaded, and Herr again stepped to the plate. The 29-year-old switch-hitter was much more of a contact hitter than a power bat; in 13 major-league seasons, he had just 28 home runs. Two seasons earlier, Herr had driven in 110 runs for St. Louis’s pennant winners—while hitting only eight home runs.

But with Orosco lacking command of his pitches, particularly his slider, Herr sat on a fastball over the plate, expecting Orosco to try to get ahead in the count. He hit a first-pitch fastball to deep left field, just clearing the wall for a walk-off grand slam.8

The Cardinals had defeated the Mets for the second straight day, and the delirious Cardinal fans threw giveaway seat cushions onto Busch Stadium’s turf.

Herr, who had six RBIs in the game, said he knew right away that the ball was going over the wall. “It was a great feeling seeing everyone waiting at home plate and going a little crazy,” he said.9

“I was hoping it would hit a bird or something,” said Orosco.10

The Cardinals completed the sweep with a 4-2 win in the series finale. By May 22 they had taken over first place in NL East to stay. They held off the Mets in September to win the division and return to the postseason, eventually losing the World Series to the Minnesota Twins. Tom Herr’s game-winning grand slam on April 18—one of only two homers he hit all season—was a memorable step on their path to October.11

In addition to the sources cited in the Notes, the author relied on Baseball-Reference.com and Retrosheet.org for pertinent information, including the box score and play-by-play. He also consulted player biographies in the SABR BioProject and reviewed a recording of the television broadcast of the bottom of the 10th inning, posted on YouTube by the HELLO STL account.

11 The Cardinals and Mets alternated NL East titles from 1985 through 1988, with New York winning the division again in 1988. In 2021 several members of both teams remembered the rivalry. “There was no better and fierce rivalry than the Mets and Cardinals,” Keith Hernandez said. “In ’85, ’86, and ’87 there was no fiercer rivalry. It was so much fun to play.” “They were just great games, they were fun games,” John Tudor, the NL Cy Young Award runner-up with St. Louis in 1985, added. “The Cardinals-Mets Rivalry,” St. Louis Cardinals YouTube Channel, September 13, 2021, https://www.youtube.com/watch?v=ekC_WeQT9eQ.