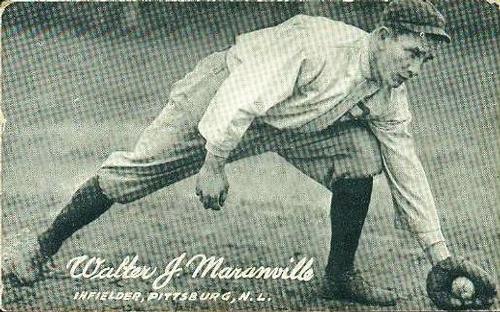 The Pittsburgh Pirates seized headlines during the winter of 1920-21, outmaneuvering several rivals to acquire star shortstop Rabbit Maranville from the Boston Braves. Maranville matched the anticipation with crowd-pleasing defense and clutch hitting in his Forbes Field debut, as the Pirates rallied for an 8-7 win over the Cincinnati Reds in their 1921 home opener on April 21.

Walter James Vincent Maranville became Boston’s shortstop as a rookie in 1913 and remained for eight seasons, leaving the lineup only for naval service during the Great War in 1918. A “wonder of baseball, being the size of a boy with the speed of a jackrabbit and the arm of a Moriarty,” as a 1914 article proclaimed,1 the 5-foot-5, 155-pound Maranville — in what Baseball-Reference calculated as the fifth most valuable defensive season by a National League shortstop ever2 — spearheaded the Miracle Braves to the 1914 NL pennant, finishing behind only teammate Johnny Evers for Most Valuable Player honors.3 By Maranville’s 29th birthday, in November 1920, only six other Braves had ever played in more games.

But trade rumors involving Maranville surfaced in 1919.4 They resumed in November 1920, after Boston’s fourth consecutive losing season. “The Braves star did not seem overpleased with his connection in Boston the last two years,” Charles J. Doyle suggested in Pittsburgh’s Gazette Times, noting that the Braves had fined Maranville at the end of the season for leaving to play in an exhibition game.5 Braves owner George W. Grant confirmed on December 13 his willingness to “trade any player on his squad if, in his judgment he could strengthen his club” — including Maranville.6

The Pirates had struggled at shortstop since Honus Wagner last played there in 1916.9 “The infield weakness of the Pittsburgh club last year kept the Pirates out of a money position; many wise baseball men think that [manager George Gibson] would have copped the flag had he had a high-class man around the short-field patrol all year,” Doyle wrote in the Gazette Times.10 Wagner himself praised the move. “[Owner Barney Dreyfuss] has been trying hard to win a pennant and it has oft been said that shortstop is the weak spot, but with the signing of Maranville he has obtained the greatest short-fielder in the game today and, if he [doesn’t] bring the Pirates near the top, then I miss my guess,” he remarked.11

Maranville’s first appearance at Forbes Field in 1921 followed a season-opening trip to Cincinnati and Chicago. After an Opening Day loss to the Reds, the Pirates surged to five wins in six games.12

A Pittsburgh opener record crowd of 28,000 showed up on a rainy afternoon.13 With all seats occupied, spectators ringed the field; any balls hit into the overflow were ground-rule triples.14 Wagner made the ceremonial first pitch.

Babe Adams, at age 38 the NL’s oldest pitcher, started for Pittsburgh. Adams had thrown seven strong innings against Cincinnati in the season opener on April 13 but lost on four runs in the eighth.15 A sprained back from hitting fungoes to teammates in Cincinnati delayed his second start until the home opener.16

Adams opened with a strike to Dode Paskert, who popped up the next pitch to George Cutshaw at second. After Jake Daubert singled, Maranville cleaned up the inning, forcing Daubert on Sam Bohne’s grounder and tagging Bohne on a steal attempt.

Backed by a Reds lineup missing holdouts Edd Roush, Heinie Groh, and Larry Kopf, starter Buddy Napier gave up a single to Carson Bigbee to open the first.17 One out later, Maranville hit a liner to right. Rube Bressler — a midcareer outfield convert from pitcher and an early-season injury replacement for Charlie See18 — hesitated at first, then realized the ball was over his head and chased after it, but missed the catch by “a foot.”19 The ground-rule triple scored Bigbee. Cutshaw singled home Maranville for a 2-0 Pirates lead.

Cincinnati soon erased the deficit. Pat Duncan started the second with a ground-rule triple to right, and Bressler singled him in. Napier led off the third by tripling over Max Carey’s head in center and into the crowd; Paskert’s single sent him home with the tying run.

A day earlier, Cincinnati manager Pat Moran had called for four sacrifice bunts in a win over the St. Louis Cardinals. The small-ball focus continued as Daubert bunted Paskert to second. When Bohne singled to center, Paskert scored for a 3-2 Reds lead, and Gibson replaced Adams with Elmer Ponder.

Maranville thrilled the crowd in the fourth, fielding Ivey Wingo’s grounder behind second and throwing him out at first. “[W]hen [Maranville] gobbled up the first wicked hopper which came his way and made a lightning throw to Charlie] Grimm, the women fans, with whom it seems he has become a great favorite, cut loose in regular old time style,” the Pittsburgh Post reported.20

The Pirates began their counterattack in the fourth. Cutshaw tripled into the crowd in center with one out. Possum Whitted’s sacrifice fly to center drove him in.

After Maranville ended Cincinnati’s fifth by starting a “fast double play” on Bohne’s grounder, Pittsburgh regained the lead in its half.21 Grimm led off with a triple to right-center. Schmidt dropped a single into center, driving in Grimm with the tying run.

One out later, Bigbee’s single sent Schmidt to third. Carey hit a fly ball to left. Anticipating a tag-up, Duncan threw home, but Schmidt held, and Bigbee advanced to second.

Bigbee’s alert play gave Maranville two runners in scoring position. He capitalized with a single between third and short, scoring both Schmidt and Bigbee for a 6-4 Pittsburgh lead that ended the day for Napier.

But that advantage lasted for only four Reds batters. Duncan opened the sixth by doubling. Bressler singled to left. Bigbee threw to the plate, but Duncan held at third; Bressler took second.

Rookie Lew Fonseca hit a liner to center. Carey hustled into position for the catch but dropped it for an error; Duncan scored, and Bressler moved to third. Carey then hauled in Sam Crane’s long fly for the first out of the inning. Bressler came home, and the game was again tied, 6-6.

Ponder’s afternoon was over; Gibson summoned rookie Moses Yellow Horse. The Pirate faithful greeted the Pawnee member with “a great burst of cheering and handclapping,” noted the Gazette Times.22 The Forbes Field band “struck up a weird Indian tom-tom,” reported the Pittsburgh Post.23

Wingo greeted Yellow Horse by singling, and relief pitcher Lynn Brenton walked to load the bases. But Cutshaw fielded Paskert’s grounder to second base, tagged Brenton, and fired to first, completing a double play and maintaining the tie.

The Reds went ahead again in the seventh, as the rain, intermittent throughout the day, fell harder. Yellow Horse recorded two quick outs, but Duncan tripled into the overflow crowd in right for his third extra-base hit of the afternoon. Bressler’s single, his fourth hit of the day, drove in Duncan for a 7-6 Reds lead.

Cincinnati carried the lead into the bottom of the eighth; the rain now was enough to drive spectators from open-air boxes into the covered sections. Brenton got ahead of Carey with a 1-and-2 count but walked him, narrowly missing inside on ball four. Maranville bunted toward second. Fonseca’s hurried toss of the wet ball, too late to catch Maranville, went past Daubert for an error. Carey continued to third; Maranville reached second.

The runners held when Brenton retired Cutshaw on a comebacker, but Whitted drove in Carey with a sacrifice fly to right. The Pirates were even again, and Maranville moved to third.

Cotton Tierney, playing third while Clyde Barnhart recovered from a cold,24 tripled into the crowd in left, the seventh three-base hit of the game. Maranville came home with the go-ahead run, “doing the last ten yards on his hands and knees, much to the amusement of the fans,” the Pittsburg Press reported.25

Yellow Horse was the pitcher of record for the lead run and still on the mound in the ninth, seeking his first major-league win. Paskert led off with a single, but the Pirates turned Daubert and Bohne’s grounders into force outs. When Whitted ran across the right-field foul line and into the crowd to catch Duncan’s fly ball, Pittsburgh had won the 1-hour, 57-minute game.

Pittsburgh’s newspapers hailed Yellow Horse and Tierney’s roles in the win, but Maranville earned special mention. “Maranville is the same old fielding marvel, and he is showing hitting ability these days that adds to his value many fold,” Ralph Davis remarked in the Pittsburg Press. “He is as full of life as a kitten, and his antics yesterday set the crowd wild with delight.”26

Maranville went on to delight Pittsburgh in 1921 with career highs — to that point — in batting average, on-base percentage, and slugging percentage. He tied Carey for the most Wins Above Replacement among Pirates position players.27 Pittsburgh led the NL until the Giants rallied from a 7½-game deficit on August 23 and passed them in September; they finished four games back, their closest showing since their 1909 World Championship.

2 Baseball-Reference.com calculated Maranville’s 1914 Defensive Wins Above Replacement at 4.2. As of 2021, only Art Fletcher (1917), Ozzie Smith (1989), Andrelton Simmons (2013), and Joe Tinker (1908) have recorded higher totals among players who primarily played shortstop.

3 The Chalmers Automobile Company awarded a car to the NL and AL batting champions in 1910 and to the Most Valuable Players of each league from 1911 to 1914. Maranville had finished third behind Jake Daubert and the Philadelphia Phillies’ Gavvy Cravath as a rookie in 1913. “Evers and Collins Get Cars: Braves’ and Athletics’ Second Basemen Voted Most Valuable to Their Team,” Boston Sunday Globe, October 4, 1914: 15.

18 See — the Reds replacement for Roush in center as the season opened — was sidelined with what was reported as “[an] infected arm, caused by pulling a hangnail from a finger.” In his absence, Paskert shifted to center field and Bressler played right field. “Injection of Pep Fails to Win for Moranites: Pirates Win Final Tilt When Red Hurling Sags; Phillies Humble Giants,” Dayton Daily News, April 17, 1921: 1.

27 Baseball-Reference.com credited both Maranville and Carey with 4.2 Wins Above Replacement in 1921. Pitchers Wilbur Cooper and Whitey Glazner led the team with 5.0 and 4.6 WAR, respectively.