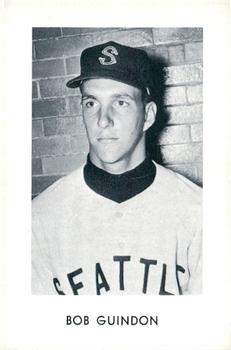 The 1967 Boston Red Sox captured the attention of the baseball world by going from ninth place to the World Series in one season’s time. The so-called “Impossible Dream” season rejuvenated a franchise that hadn’t made the Series since 1946 and had come to be viewed as a going-nowhere “country club” team.1

Some of that year’s improbable magic must have trickled down through the Red Sox minor-league system as well. How else to explain the story of a former Red Sox first baseman, trying to prolong his career with a move to the mound, throwing a no-hitter in only his third professional start?

In the early ’60s, Red Sox fans probably expected Bobby Guindon to be holding down the first-base bag at Fenway Park by 1967. A schoolboy star from nearby Brookline, Massachusetts, Guindon signed with Boston in 1961 for a $135,000 signing bonus, reportedly the highest given by any major-league team to that point. After several years of minor-league seasoning, he got a brief look-see with the Red Sox in September 1964, playing five games at age 21.2

But his minor-league performance suffered in subsequent seasons. He hit .206 in Triple-A ball in 1965 and .256 between Double A and Triple A the following year. His decision to leave the Triple-A Toronto team for a few days in 1966 as a head-clearing exercise was poorly received by Red Sox management. To make matters worse, the left-hander suffered a serious injury to his right hand in a snowblower mishap after the 1966 season, affecting his ability to hold a bat.3

While continuing to play first base, Guindon turned to the mound in 1967 as an option to revive his career. Despite no previous pitching experience — even in high school — he learned quickly, developing a solid repertoire of pitches. Billy Gardner, his manager with the Pittsfield (Massachusetts) Red Sox4 of the Double-A Eastern League, said: “Bob throws as good as any left-handed pitcher in this league. He has a heck of a slider, a good fork ball and a fast ball that really moves.”

Guindon had two starts, no decisions, and 10⅓ innings of experience when Gardner gave him a start in the first game of a doubleheader against the York (Pennsylvania) White Roses on August 25.

He couldn’t have asked for a better team to pitch against. While 1967 was a poor year for hitting throughout the eight-team Eastern League, the White Roses posted the loop’s worst batting average at .217.5 The Washington Senators farm team ranked last in hits, doubles, and RBIs, and second-worst in home runs. Going into the August 25 doubleheader, the White Roses had already been no-hit three times.6 The team’s futility at the plate resulted in a league-worst 43-95 record for the season,7 as well as some remarkable individual results. Pitcher Dick Such posted an 0-16 record despite a 2.81 earned-run average, while teammate Doug Ritter went 4-11 with a 2.85 ERA. In the field, the White Roses were second-worst in the league in errors and worst in fielding percentage, which also helps explain how the team’s pitchers could have such low ERAs but such poor won-lost records.

Fourteen members of the White Roses played in the big leagues at some point, and manager George Case8 wrote four of them onto his lineup card for the first game.9 Del Unser started in center field and hit leadoff, Dick Billings hit third and played right field, Dick Smith hit cleanup and played left field, and rookie lefty Jan Dukes started on the mound. Dukes was a first-round pick of the Senators in the secondary phase of the 1967 draft. Like many of the White Roses’ other hurlers, he pitched well that year but had little to show for it, posting a 1.63 ERA in 15 Double-A games but going only 5-7.10

Eighteen players who saw action for Pittsfield that year also appeared in the major leagues, and manager Gardner started five of them. In addition to Guindon, this group included center fielder and leadoff hitter Bobby Mitchell; Carmen Fanzone, hitting third and playing first base; left fielder and cleanup hitter Bill Schlesinger; and catcher Russ Gibson, hitting fifth.11 Schlesinger had a monster year, at least by 1967 standards, leading or co-leading the league in hits (141), home runs (21), total bases (236), slugging percentage (.471), and RBIs (81). Mitchell tied his teammate for the league lead in hits and led the league in runs scored, with 74.12

Unlike the pathetic White Roses, the Red Sox played competitive ball, finishing the season with the league’s second-best record at 75-62, 5½ games behind first-place Binghamton.13 Pittsfield came into the game with a four-game winning streak, while York had dropped four in a row.14

With a mere 297 fans on hand at Pittsfield’s Wahconah Park, Dukes and Guindon settled in for a pitchers’ duel. Guindon walked leadoff hitter Unser but quickly settled into a groove, retiring the next three hitters and continuing to mow down the White Roses in subsequent innings. In fact, the White Roses didn’t get another man on base until the seventh inning, when first baseman Joe Klein15 drew another walk. Klein took second on a groundout but advanced no farther.16 Guindon later credited his success to his slider, saying he threw only four or five curveballs over the course of the game.17 While fielding at the lower levels of the minors can be unpredictable, Pittsfield made no errors behind Guindon.

Dukes was not as dominant but kept the Red Sox off the scoreboard for five innings. In both the second and third innings, the first two Pittsfield batters singled, but timely double plays stalled each rally. The Red Sox finally broke through in the sixth, starting with a one-out single by Fanzone, who took second on a wild pitch. Schlesinger collected an infield hit on a grounder to short, with Fanzone holding at second. Gibson hit a potential double-play grounder to third baseman John Monteleone, but second baseman John Biedenbach dropped Monteleone’s throw to load the bases.18

Right fielder Dan Rudanovich singled to left field to drive in two runs, and a wild return throw to the catcher allowed the runners to move to second and third. Second baseman Stan Bledsoe’s fly ball to center drove in a third run. Dukes intentionally walked third baseman Dick Kratz to pitch to Guindon, and Guindon — hitting .242 at the time — laced a single to make it 4-0. Mitchell hit a fly to right that Billings misplayed, allowing Pittsfield to push across its fifth and final run. Only one of the five runs was earned.19

The Eastern League played seven-inning games in doubleheaders, which meant Guindon was just three outs away from a no-hitter when he returned to the mound after the rally. He said later that he was fully aware of the hitless game and felt “very tense” going into the seventh inning.20 His pitching betrayed no sign of inner turmoil, though. Guindon retired Billings on a foul fly to Schlesinger in left, Smith on a roller to Kratz at third, and Monteleone on a foul pop caught by shortstop Don Fazio. The game wrapped up in 1 hour and 34 minutes, and Guindon used a scant 82 pitches to relegate the White Roses to the ignominy of a fourth no-hitter.21

The loss was York’s 28th shutout defeat of the season.22 The team finished the season with 29 shutout losses and might have had more if two rained-out games had been rescheduled.23 Speaking of rain, the second game of the doubleheader was postponed by rain after 3½ innings with Pittsfield ahead, 1-0.

Guindon pitched 29 games for Pittsfield in 1967 and 1968 and, by the numbers, did well, posting a combined record of 12-6 with four shutouts and an ERA of 2.14.24 But in the December 1968 minor-league draft, the St. Louis Cardinals organization selected him, and once there, necessity put an end to his pitching opportunities. Cardinals farm teams at Arkansas and Tulsa found themselves in need of a first baseman, and Guindon moved off the mound to fill the vacancies.25 He pitched only nine games at the Double-A level in 1969 and four in Triple A in 1970.

With professional opportunities lined up outside baseball, Guindon left the game after the 1970 season. His whitewash of the White Roses was destined to remain a hint at what might have been, and an interesting footnote to a season in which anything seemed possible in the Boston Red Sox organization.

Neither Baseball-Reference nor Retrosheet provides box scores of minor-league games, but the August 26, 1967, editions of the Berkshire Eagle (Pittsfield, Massachusetts) and the Gazette and Daily (York, Pennsylvania) published box scores.

1 Glenn Stout and Richard A. Johnson, Red Sox Century: One Hundred Years of Red Sox Baseball (New York: Houghton Mifflin, 2000). The chapter covering the period between 1961 and 1966, spanning pages 295 through 314, is titled “The Country Club.”

2 Biographical material on Guindon in this and the next two paragraphs is taken from Bill Nowlin, “Bobby Guindon,” SABR Biography Project.

6 2019 Eastern League media guide, accessed online November 23, 2020. The other pitchers who no-hit York in 1967 were Paul Campbell of Elmira on April 25, Lawrence Tolliver of Waterbury on May 13, and Steve Arlin of Reading on July 25.

7 The White Roses finished fourth and last in the league’s West Division, 30½ games behind first-place Elmira.

9 Members of the 1967 White Roses who played in the big leagues but did not appear in this game were Brant Alyea, Dick Bates, Joe Coleman, Bill Gogolewski, Don Loun, Dick Nold, Amado Samuel, Barry Shetrone, and Rupe Toppin. Not all of these players were likely on the roster at the same time.

10 Dukes also pitched two games with the Senators’ Triple-A team in Hawaii that year, going 0-1 with a 4.50 ERA.

11 Members of the 1967 Pittsfield team who reached the big leagues but did not play in this game were Ken Brett, Pete Charton, Galen Cisco, Chris Coletta, Ron Klimkowski, Billy McLeod, Al Montreuil, Jerry Moses, Ed Phillips, Ken Poulsen, Jose Tartabull, Ken Wright, and manager Gardner, a former big-league infielder who appeared in two games as a fill-in. Not all of these players were likely on the roster at the same time.

13 According to the 2019 Eastern League media guide, the Red Sox’ second-place finish did not qualify the team for the playoffs. The first-place teams in each division faced off in the postseason, with East Division champion Binghamton beating West Division champion Elmira.

15 Klein never made the majors as a player, but later became the general manager of the Detroit Tigers, Texas Rangers, and Cleveland Indians. He also served as executive director of the independent Atlantic League of Professional Baseball.

25 John Ferguson, “Home-Run Punch Not an Uppercut, Guindon Discovers,” The Sporting News, May 16, 1970: 33. In this article, Guindon mentioned that he was training for an officer’s position with a Boston-area bank.