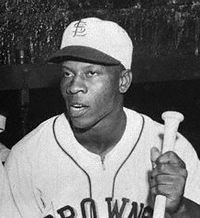 Fenway Park hosted its first major-league game in April 1912, deep in baseball’s segregated period. Thirty-three years later, Jackie Robinson – then a member of the Negro American League’s Kansas City Monarchs – was one of three Black players at Fenway Park on April 16, 1945, for what is now generally considered a “sham tryout” by the Red Sox.1

Robinson did play on a major-league field in Boston later that season, on August 13, 1945, when the Monarchs had an exhibition game at Braves Field, in the first night game played in a Boston major-league ballpark.2 He signed with the Brooklyn Dodgers organization in October 1945, spent 1946 with the minor-league Montreal Royals, and then became the first Black ballplayer to compete in a regular-season game in the modern era in what were then called the major leagues when he took the field for the Brooklyn Dodgers on April 15, 1947 – Opening Day at Ebbets Field, against the visiting Boston Braves.3 Robinson’s first appearance in a major-league game in Boston was at Braves Field on May 30, 1947.

The first Black ballplayer in the American League was Larry Doby, who broke in with the Cleveland Indians on July 5, 1947, about two weeks after Cleveland visited Fenway Park for a weekend series. Before Doby and the Indians returned to Boston at the end of July, the St. Louis Browns added two Black players: Willard Brown and Hank Thompson.

On July 25, 1947, Brown became the first Black ballplayer to play in a major-league game at Fenway Park. The last-place (32-54) Browns were in Boston, already 26½ games behind the first-place Yankees. The hosting Red Sox were in third place, 11½ games behind.

The 32-year-old Willard Brown had played for the Kansas City Monarchs since 1937. The Browns were hoping he and Thompson, who did not play in the July 25 game at Fenway Park, would help provide a spark to get them out of the cellar.

Willard Brown batted sixth in the order and played right field. The Browns took a 1-0 lead in the top of the first on back-to-back leadoff doubles by third baseman Bob Dillinger and second baseman Johnny Berardino. Johnson retired the next three batters.

The Red Sox took a 4-1 lead in the bottom of the inning on a single by shortstop Johnny Pesky and a home run into the right-field grandstand by left fielder Ted Williams, followed by second baseman Bobby Doerr’s homer on the very next pitch, a walk to center fielder Dom DiMaggio, and a double from first baseman Jake Jones. The Browns brought in Sam Zoldak to relieve Kramer. Zoldak secured the third out when catcher Birdie Tebbetts hit a fly ball to Brown in right field.4

Brown led off the top of the second. He lined a double off the left-center-field fence, and scored when the next batter, first baseman Wally Judnich, singled.

The Browns edged closer, with a third run in the top of the third on Berardino’s one-out triple, a walk, and a force play at second base that saw Berardino score. The Red Sox added a run, making it 5-3, in the bottom of the third.

Brown led off the fourth inning and doubled again, off the wall in left-center, but was left stranded.

St. Louis took a 6-5 lead in the top of the fifth. Dillinger led off with a home run. Harry Dorish relieved Johnson on the mound. He got an out from Berardino but walked shortstop Vern Stephens and then surrendered a home run to left fielder Jeff Heath. Brown made the third out of the inning, but the Browns had a 6-5 lead.

The lead didn’t last long. Ted Williams led off the bottom of the fifth taking a base on balls. DiMaggio singled. Jones singled, Williams scoring from second base to tie the game, 6-6. The Browns brought in a new pitcher, Glen Moulder. The Red Sox pulled off a double steal. Ruel had Moulder walk Tebbetts intentionally. Dorish laid down a squeeze bunt, sacrificing himself while DiMaggio scored the go-ahead run. There was no further damage done.

No other runs were scored, by either team, in the final four innings. Only three more players reached base. Dillinger singled for St. Louis and Williams and Tebbetts each singled for Boston. The final score was 7-6.

Had the large crowd at Fenway been inhospitable to Willard Brown, who had broken the color barrier at the ballpark? Not at all.

There had been anticipation. Roger Birtwell of the Boston Globe wrote a feature that appeared the morning of the game, heralding the arrival of both Brown and second baseman Thompson.5 During batting practice before the July 25 game, Ted Williams shushed some of his teammates, saying he wanted to watch Brown hit.6

Chris Wertz writes that when Brown left the on-deck circle to step into the box in the second inning, “The nearly sold-out Fenway Park … gave him, a visiting player, applause.”7 Wertz added, “When he trotted out to right field at the end of the inning, they applauded again. And again, when he batted for the second time, they applauded. Brown responded with his second double of the night – the second of his career. With each plate appearance and each time he took his position in right field, the Fenway Faithful greeted Willard Brown with cheers that grew as the game progressed. According to Jack Barry of the Boston Evening Globe, “[Brown] received a fine ovation from the crowd as he trotted to his right field position at the close of each round.”8

The St. Louis Post-Dispatch agreed: “Willard Brown, the cat-walking Negro rightfielder of the Browns, who runs like a hurried panther, last night earned some of the loudest cheering Boston has given to a visiting ball player here in years.”9

Any notion that the Fenway Faithful would not have welcomed a Black ballplayer on the Red Sox would seem to be misplaced.

The Boston Braves were the first major-league team from Boston to integrate, adding center fielder (and former Cleveland Buckeyes star) Sam Jethroe in April 1950. Jethroe was voted National League Rookie of the Year in 1950.10

The Red Sox didn’t field a Black player until almost 13 years later, making them the last to integrate of the then-16 teams in the National and American Leagues. Pumpsie Green appeared in the July 21, 1959, game the Red Sox played in Chicago. His first game in Boston was on August 4, 1959.

The Red Sox swept the four-game series against the visiting Browns, winning 12-1 on Saturday, thanks in part to two home runs and four RBIs by Ted Williams and a six-hitter by Joe Dobson. In the fourth inning, when Brown pulled a ball Williams hit out of the bullpen, it ended a streak of six hits in a row the Red Sox slugger had off Browns pitchers. The Red Sox took both games of the Sunday doubleheader, 4-3 and 11-2.

Willard Brown was hitless on Saturday but had a base hit in each game of the doubleheader. Though his time with the Browns was relatively brief (21 games), he led the Negro American League that year in both batting average and runs batted in. It was the sixth of seven seasons in which he led the league in RBIs.

Willard Brown was named to the National Baseball Hall of Fame in 2006.11

2 The game was between the Monarchs and the Charlestown Navy Yard A.A. of the Boston Park League. The Boston Post called it “the first arc-light baseball game played in either major league park here.” The Monarchs won, 11-1. Robinson had two hits and stole four bases, including a steal of home. The Monarchs’ Hilton Smith threw a three-hitter. See Bill Nowlin, “The First Time Jackie Robinson Played a Ballgame in Boston,” in Pumpsie & Progress, 92-95. Brown had played in that game; the 1947 visit was thus his second visit to Fenway Park.

3 The first batter of the game, Boston’s Dick Culler, grounded to third baseman Spider Jorgensen, who threw the ball to Robinson at first base for an out.

4 All four runs were unearned because, with two outs, Williams had hit a high fly foul ball that was dropped by catcher Les Moss, giving Williams another chance. He pounced on the next pitch. The St. Louis Post-Dispatch wrote that Moss “got so dizzy waiting for a towering Ted Williams foul that he didn’t catch it.” “W.J. Brown Wins Cheers but Browns Blow Night Game,” St. Louis Post-Dispatch, July 26, 1947: 6.

5 Roger Birtwell, “Ted and Heath Deal for Home Run Lead Tonight,” Boston Globe, July 25, 1947: 5. The subhead of the article was “Negro Speedsters of Browns Make Local Debut.” As noted, Hank Thompson did not play in the July 25 game but he did pinch-hit – producing an infield single – late in the game the next day.

6 Burt Whitman, “Sox Edge Browns, 7-6,” Boston Herald, July 26, 1947: 5. One of the balls hit in b.p. was “a beautiful liner that cleared the center field wall barely to the left-field side of the flag pole, something you seldom see.”

11 See a brief article and an image of his plaque at: https://baseballhall.org/hall-of-famers/brown-willard